A Blue Ride to somewhere beginning with Hardwick

I had been having a bad week to be honest, Funerals, 1000 miles of driving and no sleep leading up to the post for Sunday’s ride. The result; wrong date (twice) and wrong destination. Must do it again because we had record numbers at the cricket club!

Starting off were: Martin Crapper, Mick Lee, Tina Musgrove, Christina Cooper, Nick Kay, Kevin Thomas and Pete Hanks. Yes, that’s right, five of us all ready and willing. So off we went out of the gate and left overtaking a lone rider on Sunderland Street in red and on a “vintage” bike.

The route took us right at the Stripe Road junction and we slowed to be sure we were all together mainly because there seemed to be a lot of traffic, oh, and 8 of us (!). On into Harworth and turned right to and through Styrrup following the road to Oldcotes where we did a quick right and then left passing all the cars parked outside the church (and by-passing the traffic lights).

The weather was brilliant. The last week had been not so good so it was a pleasure to be out in bright sunshine. We chatted our way through Langold and onto Carlton where we took the left turn up Tinkers Hill and Hundred Acre Lane which sounds a lot like a Paddington Bear adventure and was just as pleasant. Nick decided to go ahead and get his heart racing towards the top of the slope but otherwise we were all well behaved!

Somewhere along this road the red clad rider on vintage bike came up beside me and rode for a while. He was Don Gill from Tickhill and he turned left towards Blyth as we turned right towards Worksop. We had a couple of pauses in pace to allow some mobile regrouping and at one point Nick had to put his chain back on. Otherwise this was a turning out to be a good social and uneventful ride.

Whilst there was quite a bit of traffic compared to recent Sundays we made our way easily through Worksop town centre and out the other side regrouping at the top of Sparken Hill. Once we had turned right and then left and were on the minor road leading to the park we settled into serious chatting whilst waiting for the coffee bean aroma to reach us. The road to the left just before the arch gets longer each time we ride along it and the surface more pitted but its better than a lot of roads we encounter.

Naturally we took the path bypassing the gate as we turned right on the final stretch to Hardwick and found when we got there that all the tables were taken. Fortunately a group of cyclists were just leaving so we quickly occupied it and left our helmets and Pete to stake our claim while we joined the long queue to the café/truck.

Drinks and snacks were up to the usual good standard though spreading carving grade butter onto scone didn’t work well. After more discussions and questions about the route back we set off. The route took us towards Retford along Limetree Avenue and over the A1 roundabout. Well that was my recollection anyway!

Apparently Mick was bored so he threw himself into a bush before he even got to the tarmac! And the only witness was Christina who was being a carer even on her day off by making sure Mick at least knew the way. The rest of us were off and oblivious to all the excitement. We had to believe her because there were no obvious scars!

We paused just beyond the roundabout and we were all together so he was OK. Before we reached the main road at Babworth Nick and Pete decided to go on to Retford as a more direct route to their homes. We paused at the island on the double bend for a group photo (or two since we couldn’t do a selfie and needed to get us all in somehow) and then we parted company at the main road and the remaining five continued on towards Sutton.

It was still bright and sunny but the temperature had dropped and the wind was against us so we pushed on. Through Sutton and left past the Daneshill Lakes nature reserve meeting the main road at Torworth. So another quick right and then left saw us heading for Blyth. Then Right and left again we headed towards Oldcotes getting stopped at the traffic lights for a short while and getting fairly spread out afterwards. We stopped in the village to regroup and chat and say goodbye to Mick who was going direct to Woodsets and in doing so he met up with two cyclist who he obviously knew and who he may have continued on with. The remaining four of us went up to the lights and made our way back down the main road splitting up in the village to go home (3) or find our car (1).

All in all a good ride. Good weather, good company and nobody wanting to go ahead or being left behind. 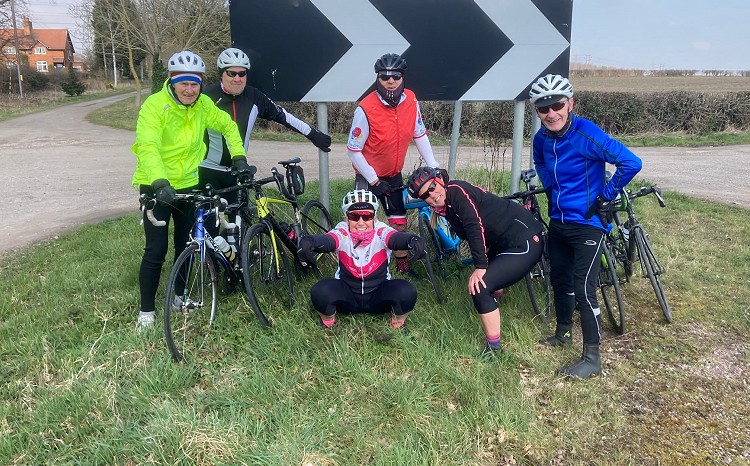