Another Wednesday and another mid-week TVC ride

A bit hillier than last week our Captain promised, nothing too taxing, we’ve heard that one before!

9 riders turned up in perfect conditions include a return for TVC old boy Carl and a first ride for his brother Neil. In early evening sunshine with not a breath of wind, Ady tried explaining the route but he lost us at the top of Wilsic lane so we decided it would be best if he stopped at the front and looked over his shoulder every now and again to make sure we were all there.

Out of Tickhill and up the first climb, Wilsic lane. Ok not on the top 100 climbs but it was enough to get heart rates on the up.

In Wadworth we notched up climb two up the newly resurfaced Tofield Lane, a stiffer test that split the group. From here we headed towards Balby but turned left for our third climb up through old Edlington, again splitting the group, not helped by a dropped chain.

With hill three in the bag Ady explained hill four was going to be Clifton possibly the toughest with it’s final kick up at the end. We attempted a handicap system whereby Diane and I set off first to give us a head start while the others had a chat. It needs a bit more work as we were overtaken way too soon but everyone waited at the top.

Hill four was hidden in the descent from Ravenfield to Thrybergh which, while net down hill does hide a cheeky little incline which most breezed up but I called a climb as I was blowing at the top.

We we're at the lowest point of the ride now, so it was all up hill back to Tickhill as the shadows got longer and we climbed for the fifth time back into Ravenfield then the sixth back into Braithwell.

From here it was surely all downhill back to Tickhill, but Adey had one last surprise for us, a detour up Col de Holme Hall Lane with it’s hairpin turn into a steep little climb.

That was it, the last climb, so all that was left was a lovely descent down Apy Lane in the last of the sunshine back to the Cricket club.

Another enjoyable mid-week club ride, even the hills didn’t seem so bad once they were in the bag. The bar has been set high, can’t wait for next week. 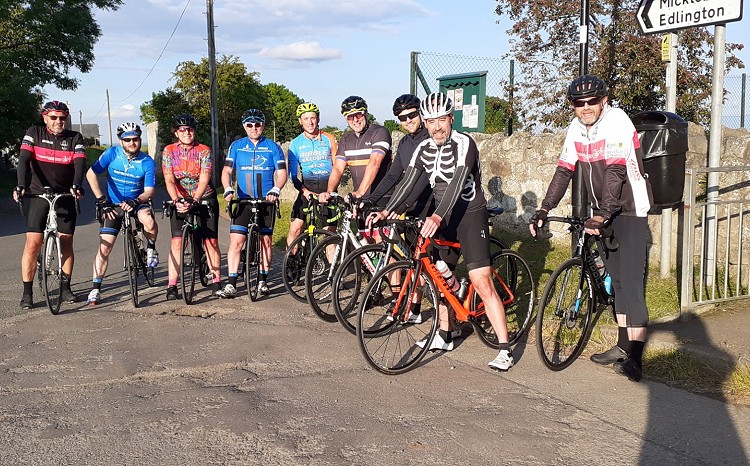