Another 'whatever the weather' social blue ride

To be honest it was a pleasant surprise to meet anybody this Sunday morning. The forecast was pretty bad, windy very cold and with the promise of rain and to cap it all the Red ride was cancelled.

John had advertised a ride with options, so we discussed those and opted for Retford. John came by car and I only live round the corner but the others had cycled and knew how bad it was. But still they came! Whichever way we went the return leg was going to be the easiest with the wind behind us. Theories!

We settled for single file until we realised that the roads were quiet so we’re able to chatter along Bawtry Road and into Harworth. The wind made the conversations a bit difficult but we coped. Over the roundabouts and left through the industrial estate towards Serlby and the golfers. There were few but they did wave and say hello. Probably thing “what fools, out on a day like this” we were thinking the same!

Up the road to Scrooby top there was very little traffic and we chatted along the way before turning right and then left round the edge of Ranskill and heading off towards Mattersey. the side wind made things a bit easier and we made reasonable progress into the village. I still don’t know why Job Lane is so called but we went along it anyway and then turned back towards Retford - easily identified by being straight into the wind.

As we reached the main road from Bawtry to Retford we intended to go straight forward, but the railway crossing was closed and the pretty red sign said “road closed” so we thought for upwards of a second and turned left! The traffic was quite a bit heavier and we followed the road in single file into town, wandering round the town clockwise before turning in and entering the pedestrian area. There were vacant seats inside the Ten Green Bottles so we were in like a shot. Bikes strapped together, Tables moved together and “stuff” ordered.

Whist the drinks and food were very welcome I was a bit concerned that the volume of my scone was less than the volume of clotted cream which came with it and only marginally bigger than the pot of jam. Oh and it started to rain. Only drizzle though!

Enough drizzle to warrant rain jackets! Not enough drizzle to stop Karen exercising her self skills so we posed before wiping saddles and setting off. It didn’t take much of a discussion to decide on the direct route home. Home being Tickhill to only two of us the others opting to peel off here and there.

Before we got to the big roundabout in Retford we knew it wasn’t going to plan. The driving rain was in our faces - what happened to the following wind? We basically did a slow version of the chain gang, hoping all the while that someone else was in front even though wind and rain still got you in the face.

Just after Barnby Moor I think we noticed that the conditions were better so we softened our approach to the route and turned left towards Blyth. Karen and David left us to go home leaving three of us to continue. I confess that by this time i was getting tired and as we passed the pet food factory and going up the hill I watched John and Diane disappearing up the hill. No matter how slow they went I could do slower!

They waited at the top and we cycled together through Harworth and up to wards Stripe road. Diane left us there and John and I continued. John stopped by his car on Sunderland street and I continued into Santa’s Grotto. It was exercise time for the dozens of budding Santas in the car park. I didn’t stay.

It will / must be better weather this weekend. See you at the car park for the start of the Sunday fun (err - Blue ride) 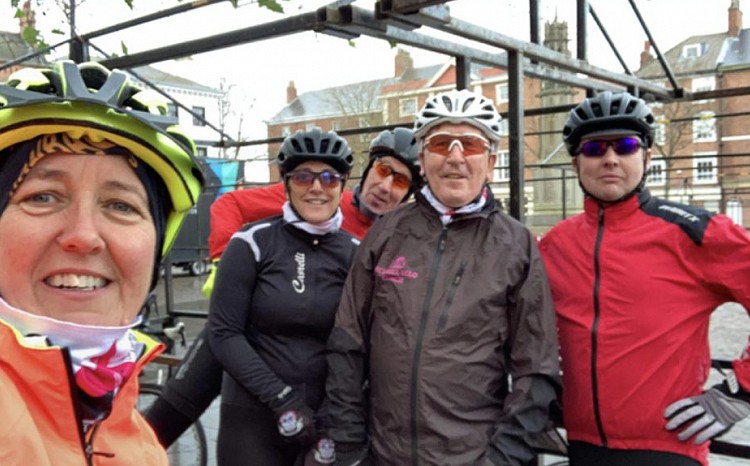 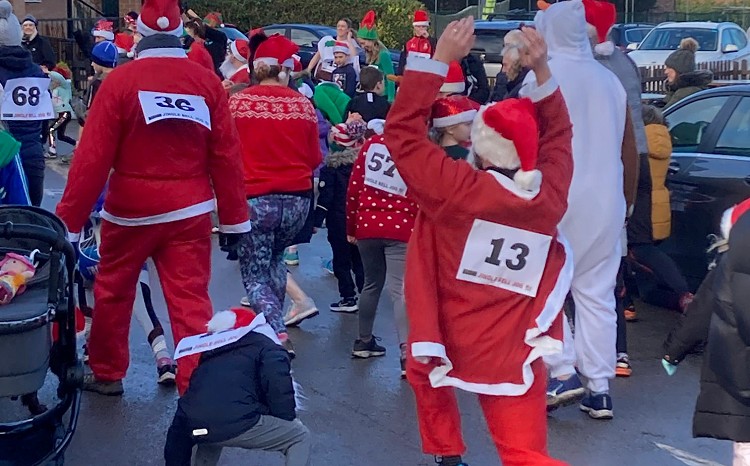