So, with the regular ride leader (so rumour had it) having decided he needed to get in some hill practise, it befell me as a trainee ride leader to come up with something for the Blue Ride to do…

It’s a good job I volunteered as if I’d turned up at the club at 8:45am to do the Red Ride then I’d have been wondering where everyone was (as did a number of other Red Riders) as I / they hadn’t realised that the Red Ride was meeting at an earlier time somewhere in Derbyshire (?)

So, I arrived at the Club at 8:30 – nothing of course to do with the fact that I’d left home at my normal time and I travel a bit faster in the car than my normal ride speed…

People started to arrive and by 8:55 we had 9 riders including the aforementioned errant Red Riders 1/2 of which decided to come along with the Blue Ride and the other 1/3rd who decided to do something else (maths was never my strong point)

So, with the help of Diana (who has a louder / more authoritarian voice than me) I explained the approximate route to Reed Café (Tickhill > Bawtry > Misson > Misterton > Walkeringham > Beckingham > Gainsborough)

I should add that we welcomed new member, new friend of members, and new partners of members (by new partners I mean they’d not ridden with us before, not that they were new to their partner)

This is the point where I realise that Martin either has an extremely good memory for every mile of the ride, or surreptitiously manages to hide a Dictaphone on him so he can write up the ride

I’ll simply say, that group was well behaved, there were no Martin (Bagshaw) navigation discussions, nor any mechanicals and we arrived at Reeds Café around 10:45

This is also the point where I realise that I’m made a rooky error and realised that before we set off I should have called ahead to the Café and told them to expect 9 riders. After some debate with the helpful people at the café we settled on a 4-6 seater table outside and the same inside, only to get seated and discover that the 2 motorcyclists were leaving and we managed to grab their (outside) table before anyone else did

In my view the food was great and (by comparison to some of the cafes we frequent on club rides) inexpensive. However, the Café may fail the Martin Bagshaw test as the appear not to do Scones

We did manage to get a photo but as my phone died on arriving home and refuses to start up, you’ll have to take my word for the fact that we all looked like racing snakes and should have been signed up by a modelling agency

After a bit of debate about which way we’d return to Tickhill we set off ultimately via Strawberry Hill where (with MASSIVE kudos) Lyndsey managed to get up the hill in the largest chain ring. Why MASSIVE kudos? Well, she hadn’t ridden a road bike since she was 19 and the bike she was riding belonged to John Clark (her partner) – which she hadn’t ridden before (apologies if that sounded dodgy but I couldn’t find a better way of writing it down

We “lost” various people on the way back as they left to ride to their respective homes with 6 of us arriving back at Tickhill at 13:04 (apologies for being 4 minutes over schedule)

An enjoyable ride with great company. 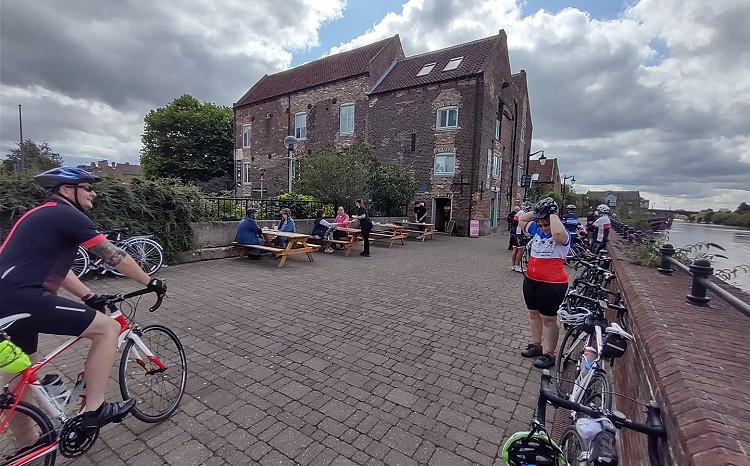