We met in the car park opposite the Pub in North Wheatley on a bright and calm morning. Scaffolding all over the pub and landlords tents were in the filed opposite so they may not have agreed about the prospects for the day. We were all fired up and headed off to our leaders home to make use of the facilities before setting off.

It was good to get out on the roads, some major some minor, with little traffic and we made good progress with Paul on the derny leading the group. He explained on the way that an e-bike was his route to getting fit after months of not doing much, if any, cycling and that he/it was good for 17mph. We found that it was good for 17mph but Paul was good for a bit more!

We wandered through small and large villages on our way to the SUSTRANS route which would take us most of the way into Lincoln - South Wheatley, Sturton Le Steeple, North Leverton, South Leverton, Treswell, Stokeham and Laneham before bypassing Dunham on Trent and reaching the start of the off road bit at Fledborough, eleven and a half miles into the ride.

The old railway line is largely flat and a mixture of hard-packed gravel and good tarmac with plenty to see along the way. There are ghost railway stations close to the start and towards the end but my favourite POI is the sign which says: “Beware Aircraft crossing”. Walkers, Hikers and dog walkers hadn’t got up yet so we had the ‘road’ largely to ourselves. A young lady on a horse pulled over to let us pass safely and a variety of poor excuses for dogs were being shown off as we neared the end of the track - some didn’t look big enough to walk.

I claim to be able to ride on those four inch wide white road markings easily for hundred of yards yet the narrow bridge over the canal and railway right at the end had me convinced ever inch of the way that one of us, probably me, was going to touch one side or the other and crash. Handlebars plus an inch is what it felt like!

Having survived that we came back to the main road for a short while then crossed over and went through the car park of the Pyewipe Inn and onto the Skellingthorpe Walk which took us alongside the canal towards the centre of Lincoln. From this point on we were entirely dependant on our ride leader and his memory. ‘Left’, ‘right’, ‘straight on’, ‘No not that way’, all commands available, but since he was in front he didn’t use any and we didn’t get lost or go up any very steep hills.

Before long we reached the first of the road barriers, Didn’t he mention that it was Steam Punk weekend? No, he didn’t and I found myself enjoying the mass of strangely clad people. Mind you we were in a variety of styles of lycra so blended in well.

We found a place to park the bikes and to sit outside and went off in groups to find food and mingle a bit. Coffee a sandwich and a sticky bun for under a fiver were a pleasant surprise. And the entertainment was second to none. Difficult to explain what we saw even for an experienced fashion reporter and we didn’t have one. Complete suits of armour were two a penny, leather kilts caught the eye and some of the headgear didn’t seem to leave breathing holes.

If we do this next year you have to come!

Before long it was time for the return leg with a visit for the loos first. Paul came equipped with a bag full of 20p pieces as he was the team planner. Loos were free today though so I guess he carried an extra kilogram of bullion! All ready, er No. 6 out of 7 yes but where is Kevin? We did a bit of searching, well we needed him, I needed him - he was my lift back from North Wheatley!

Christina switched brain on and phoned him - he was at the bottom of Steep Hill - we were at the top. After several minutes he appeared so we took a group photo in case we lost him again and needed photo ID.

At this point Paul explained about rights and lefts and never mention straight ups but no one listened anyway. It was down hill so we were off not quite the way we arrived because there were one way bits. And with planning mode switched off sporadically we only did one one-way street the wrong way. Not bad for a blue ride! It went seamlessly, effortlessly and other long words-ly, along the canal over the far too narrow bridge with one foot unclipped, because concentration was going now and then onto the track.

The first part was all tarmac and with very little breeze it was a breeze to ride along a nice traffic free smooth and sheltered track. There were pedestrians walking larger dogs but we were all very polite to each other . Then came the gravel with fewer pedestrians and then none - ideal cycling territory. Not so good for brambling though. Which brings us back to headline grabbing Kevin!

It probably wasn’t his fault that there was a strand (branch) overhanging the track - we all saw it well 6 out of 7. Within a fraction of a second the battle was over with Kevin covered in blood on the deck. His bike was OK though. We kind of cleaned him up but there’s only so much you can do. Sterile wipes, sterile dressings, plasters, words of comfort (honest) and we were back on the track. He seemed OK and joined in the humour.  Since he had been infront of me I hoped the video showed it all.

NOTE: when changing a battery in a video camera turn the thing on again! Sorry Kevin, you’ll just have to believe that although not too artistic you did provide interest to the ride. Oh and we checked he still had his car keys!

We went back the way we came, the track seemed much shorter than it had on the way out but the road bit and all the villages seems longer. But Kevin was doing good, maybe not looking forward to a shower but on the other hand really looking forward to the cake and tea kindly offered at Chez Paul. As well as being a good ride leader and cyclist he, Paul, excels at baking. The sponge cake, which I tried, and the tray bake, which I didn’t went down really well. Some of us (not me of course) had a take away too! I couldn’t have carried cake and a jigsaw anyway!

It had been a memorable day out, Good cycling, good company and a good destination. Thanks everybody but especially Paul. 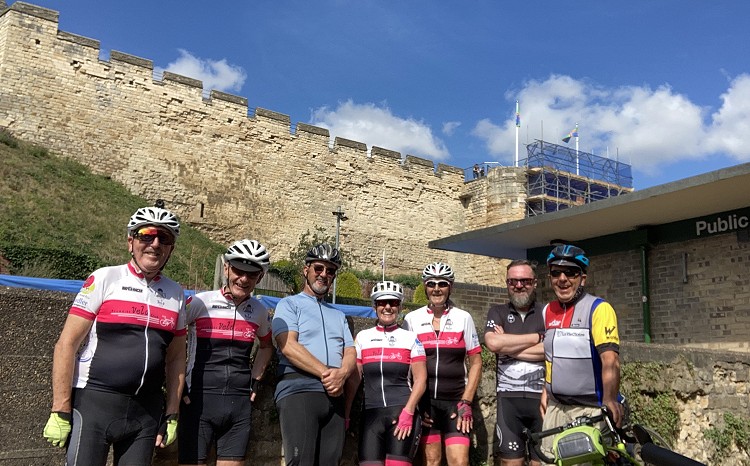 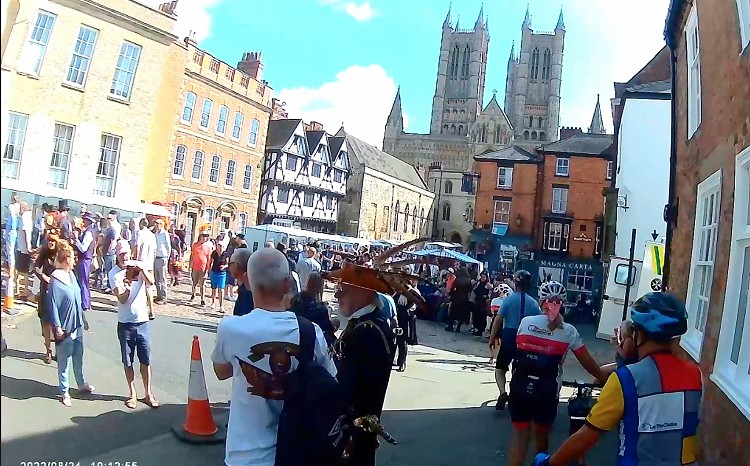 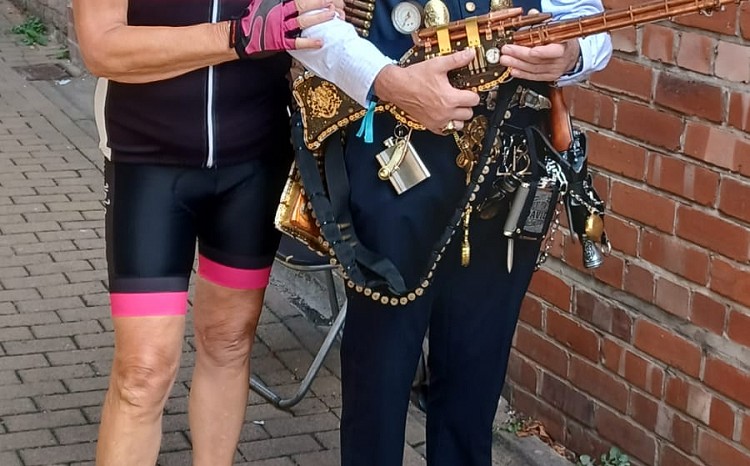