Blue ride in 2 loops to Wellingtons

Blue ride in 2 loops to Wellingtons

I arrived early (for me) at the cricket club to find only 3 Red riders and 4 blue riders. The odds began to change as more Red riders arrived but it was heart warming for a while! The weather was fine, the forecast had been terrible. No doubt holidays happen and so does staying in bed so we were to be 5 and despite hoping the red ride would get moving we were out of the gate first and wandering round Tickhill on our first loop.

The forecast had changed slightly, the heavens were not going to open until 11am. I wouldn’t say the sun was out but it was warm and the roads were close to deserted! We needed to be at Wellingtons before 11 !

We headed south and half way up Malpass hill turned left. That reminds me of a storey about turning left which happened mid week. But what happened on that ride stays there!

We slowed to regroup and having been advised by Brian that the road was rough we ignored him and carried on. It was rough, always has been but we soldiered on. Left into Styrrup and passed the golf course under the bridge and onwards. Just the odd car but lack of them made it a good cycling day - that and very light wind.

Straight over the roundabout (the first of 3 passings) up the hill and passed the Codfather and right along the main road to Bawtry. Even though we were a fairly compact group and though there was no traffic we pulled into the car park on front of the Crown Hotel to chat. Well it was a social ride. But then onwards towards Austerfield and the airfield! Nice and flat and still no traffic, lots of cyclists some in club groups others single or pairs and all as cheerful as we were. Until we turned left at the roundabout to go across the end of the runway. It’s uphill!

It slightly slowed us down, partly due to the effort of complaining, partly the slope. Looking up we could see we were going to be rain free at least to the café stop. The route took us right (north) up the great north road and then left past GoOutdoors and into Rossington. All was well at least until the start of the rise up to the railway bridge. No, no, not a complaint about a hill - I hit an unexpected pot hole bounced on my saddle which then dropped and twisted!

It took a few minutes to put things right before we were off again passing a few cyclists, fewer cars and absolutely none at the stripe road crossroads.Having turned back towards Tickhill we were in the garden centre car park hoping the gate was unlocked. It wasn’t so I set off and with hindsight wished I could have seen the faces of those who haven’t taken their bikes through a crowded shop before! We made it safely and found a table with shelter - after all it was going to rain at 11 o’clock.

We ordered and for those of us having a snack we were out and enjoying it fairly quickly. The others (3 out of 5) didn’t know the rules and were into main course and pudding mode. Apparently the bacon and egg sandwiches are finished off nicely with a great big slice of chocolate stuff!

A quick discussion followed after Lindsey had moved into the shade as the sun was too hot out in the open. What rain?

Suddenly there was traffic and a very nice lady stopped to let us out onto the road and we set off towards Harworth and our second attack of the roundabouts. This time we went straight over and through the industrial estate. Luck was with us again at the main road and we crossed easily and on passed the golf course towards Scrooby top. This little bit of the ride is pretty common on rides as it seems to give access to loads of cafés. We turned right and left and into Ranskill and then left to Mattersey with Brian having trouble remembering he was supposed to be with us and not so far ahead we could hardly see him. Fortunately he didn’t know the way so he had to keep slowing for us.

Onto Job Lane, funny name for a lane! we turned right at the end and headed south into the breeze. Views were good and there was no sign of rain as we meandered along and turned right along Daneshill Road towards Torworth Pausing only when forced to do so by the railway barrier. They had saved trains up just to put in out way and we waited patiently whilst they all passed. There was a couple of cyclists going the other way and they were there before we arrived. But time passes quicker when you spend the time chatting so we did!

Once clear we continued on and turned right and then left in Torworth heading towards Blyth Where we missed CF (café Karen) and made our way up the slope towards the A1 roundabout. I guess we did get a bit split up on the roundabout but we were back together again by the pet food factory.

Lindsey did the decent thing and kept me company up the slope and we watched the others sweating the way up ahead of us. Despite suggesting he might leave us at the roundabouts (3 of 3) Brian found he couldn’t do without our company and carried on towards Tickhill. John and Lindsey were going to go along Stripe Road home so we paused to say goodbye at the main road. Suddenly everybody and their mothers were in cars trying to get in front of us. So we sat and waited for a gap before setting off again and 3 of us made it safely to the cricket club. Hopefully the other two made it back to Cantley safely.

It had been a good dry day. What rain? Er it started whilst we were saying goodbye in the car park. But I only had 2 or 3 hundred yards to go so it didn’t matter! Have a good ride next week. 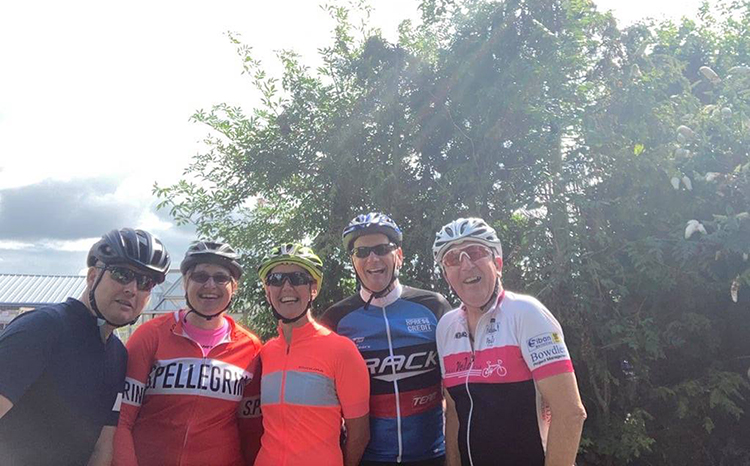 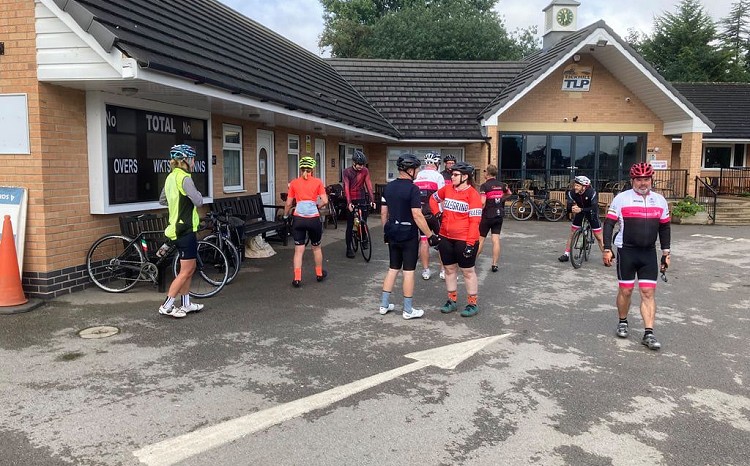 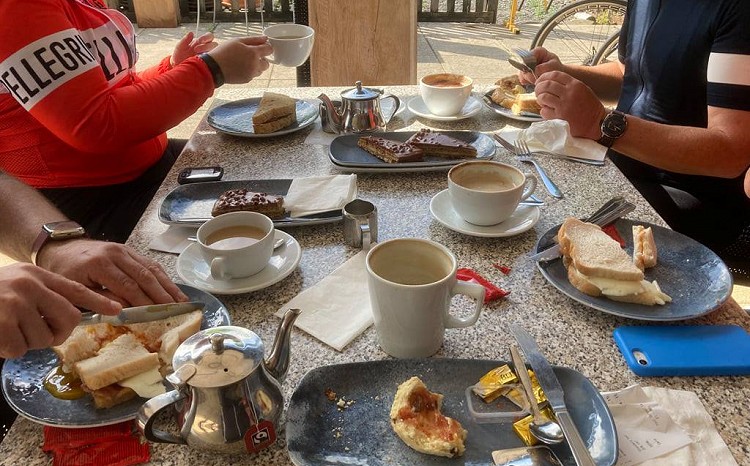