It was what has become a normal day at the Cricket Club; 14 in the Red team and, after a desperate wait, 2 in the blue team! But we were not deterred. The forecast may have had something to do with the turn out. Red team being non-believers ignored the threat of monsoon the blue team being a little(?) more trusting of the met office and associated apps!

So Peter Hanks and I (martin Crapper) watched the two red groups go and set off in the opposite direction. A quick wander round the village and we were then off south down Worksop Road. Not only was it fine and a bit sunny but there was little wind - until we got clear of the village and we could feel the full effect. Not too bad but enough for us to replan the route.

we were going to do a lap through Firbeck, Laughton Oldcotes to land at Wellingtons for coffee and then a shorter loop through Bawtry, Austerfield Rossington and home. But since were were only two we opted for a shortened route and no coffee stop.

Malpass Hill took its toll and traffic didn’t help but having eased off a bit and recovered we turned onto Thornbury Hill Lane and again felt the wind. There was a complete absence of pheasantry on the road they probably struggle with the potholes as much as us. Going down the other side was a pleasure and without a doubt the fastest free wheel I’ve done for a long time.

We waited for the odd car to clear before turning right and then left in towards Firbeck. We passed through the village easily - there was no movement of cars or pedestrians - and made our way straight along New Road and then East Field lane where the fishermen were setting up opposite the Leger Lakes café. It was at this point we decided on the change to the route. We turned left into the village and cycled downSaint John’s Road to the junction in Thoapham. We turned left on the oLdcotes Road and had some really good downhill runs before reaching the junction with the A60.

That glosses over this section of Oldcotes Road and Lamb lane but it was all over seemingly quickly. Pedal power not wind behind us was the cause of course. We turned left to Oldcotes and then first right along Main Street and right again on Blyth Road.

So far there had been no incidents, no near misses, and nothing news worthy at all. Which naturally gave us plenty of chance to gossip. We may have discussed your problems - I either can’t remember or I’m not telling!

We passed Manor Farm Café which was open but kept onwards along the A6463 towards Styrrup, under the motorway and along through the village. At the roundabout we went straight over and along Bawtry Road which vies for most pot-holed road even if not the deepest pot-holed road. And the traffic was horrendous and added to the haphazard parking made this the worst section of the ride.At the junction we took the footpath and turned towards Bawtry, a move suggested by Pete and sensible too in view of the vehicles heading both ways.

We got back on the road just before the first houses and then turned left into the car park at the front of the Crown Hotel. Pete headed off towards Misson and home and I continued along passed the Mount Pleasant hotel, into Rossington and then Tickhill. Since there was only me I didn’t check arrivals back at the Cricket Club but went home for an early shower!

Hopefully there will be more folk on a blue ride next week but I will be cycling “up north” for a few days so look forward to meeting up in two weeks time.

The photo below is as near as we got to a café! 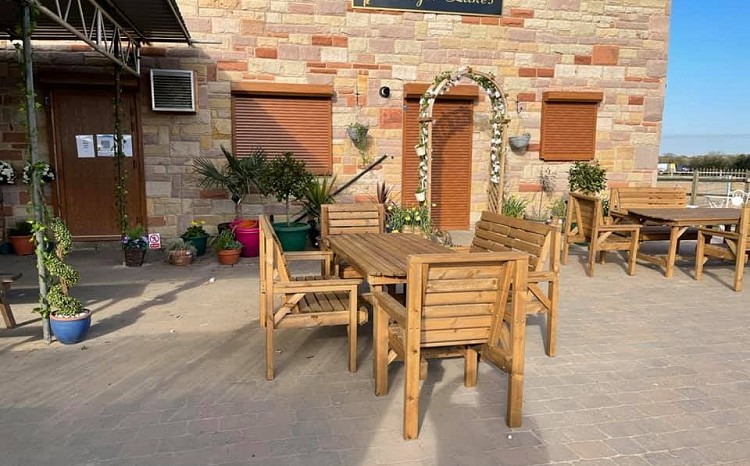