A good day threatened! Bright not too much wind and good company.

We headed past the Buttercross and through the back streets to and along Apy Lane and then left, right and left again along Raikes lane and into Braithwell the front group waited, but no need the second group were there and we crossed over and along to Micklebring where we took the back lane eventually meeting Marsh hill - the road back to Braithwell or onto Ravenfield. But we took the right turn and then a left towards the Hellaby industrial estate.

We turned right at the roundabout a task we tease Mick and Diana about but since D wasn’t there we had to concentrate on Mick! He gives as good as he takes and to be honest (a rare event) I have to say it wasn’t hie fault! Traffic split us up a bit and we took it slowly after we got off the main road onto Cumwell Lane. And by the time we reached the Thurcroft end on the road comments on “hills” were beginning to be heard! It was a good day, plenty to see loads to distract us - what hills?

Into Thurcroft and along the road to Laughton Common I think we were beginning to enjoy the ride, there was enough banter to suggest that any way!

We took my route passed North Anston and into South Anston before heading to Kiverton Bridge. We took the low road - i didn’t dare take the high road - also known as Packman Lane and alongside Bondhay Golf Club, frequented by the likes of Mark Motley who we were expecting to meet at the café stop. We cycled onto the end of the road and turned left. Mick pointed out that we never approach Arrow Café from a left turn, its always at the otherwise. Not sure whether that was a) a complement, b) a complaint or c) a miracle. But we made it safely met up with Mark Motley, parked the bikes and headed into trouble!

Bookings only! Or take-away! Not happy doesn’t come into it. There were choices but we were ready for a drink so after discussion opted for take aways! Organisation didn’t come into it either, we queued at the till and ordered and then waited - our orders seems to be fed into the queue including table orders. So with cardboard cups and egg style boxes for scones or whatever we went outside - no tables, no chairs and a very short section of wall to use to put our fodder down.

Another group of cyclists came in - it was there first list and probably there last - they were not happy! I had been in there 2 days earlier and there was no mention of biking early. To make things worse , because of the way we had to order and pay I couldn’t share out the vouchers Rob Drohan had generously given us - the good news of course is that he will be able to use them himself when all “this” is over!

Food finished and it was getting a bit cooler. Not a bin in sight so we ended up taking our rubbish into the nearest till and leaving it there. We set off into Worksop, across the big new roundabout and straight through the middle of town and turned left at the end of Memorial Avenue along Kilton Road. I had shared the GPX file with Kevin which was a lifesaver. Even though I knew the way when my Garmin said “go back” i check with Kevin and saw confirmation that we were on course. Despite shouts of “not that way” we crossed over the roundabout just passed Morrisons avoiding Kilton Hill. My roundabout route rejoined the hill and probably had more climbing in it but that’s not something I could admit at the time. We still passed by the hospital and over the lights taking us onto Blyth Road, where we paused a while to let those who got caught by the lights catch up - or as near as was allowed.

The route took us along until we met the home of Poo Bear ( ? hundred Acre wood) and turned down Hundred Acre Lane towards Carlton. Once there it was to be straight back to Tickhill. I think we lost Denise and Mick at the Cannon as they were going their separate ways home. Pete left us at Oldcotes for the long ride back to Westwoodside. The rest of us made it safely back to the cricket club. with only 400 yards to get home that is almost the end of my ride, everyone else had more to travel but it never seems to upset them.

More next week and perhaps a bit flatter! 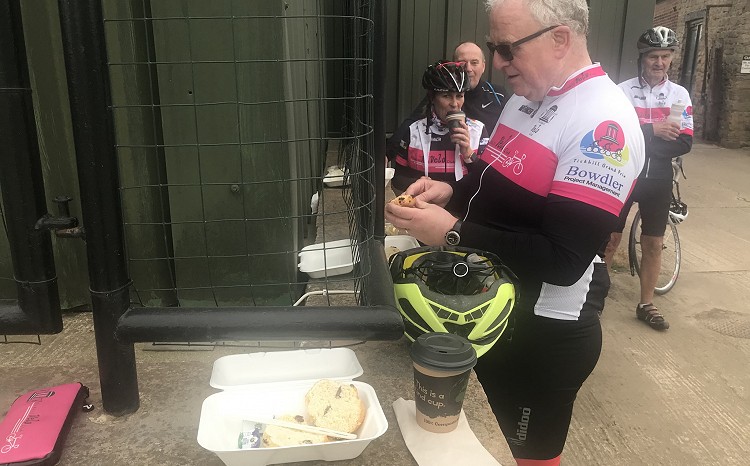