We assembled as a mixed bunch at the cricket club early on a sunny Sunday with plans in place for the Red Ride to head for Barnburgh. Since no thinking was involved the Blue Ride was going there too! By a different route of course - nothing to do with social distancing we wanted to be there first to bag the best of the buns!

We were 6 but the Red lot looked to be at least 2 groups and we left them discussing who went where. We made off left for a quick (well slow really) wizz round the village before heading up Apy Lane. I became tour guide for a moment and like all good (brilliant?) tour guides was completely ignored! So for the benefit of the 5 who either didn’t listen or had the hearing aids turned off - Tickhill Alpacas has a yurt, available for overnight sleepovers amongst said Alpacas but not tonight because my daughter will be (was) there.

It was only a bit of a head wind but combined with the incredibly steep (?) slope we were slower than in days gone by. Apy Lane becomes Tickhill back lane and we turned left and then right heading towards Edlington. We didn’t see many cars (any cars?) and sailed through Edlington. My lock-down lunches added a few pounds and several mph to my downhill freewheeling but they soon caught me up at the traffic lights. Same again going down Sprotbrough Falls! There’s always an up to go with the down and that took us all the way into Clifton.

Clifton to High Melton was again into the headwind and I again freewheeled towards the horizon slowing down to make sure the others didn’t go past the café. We found plenty of outdoor space and with table service all we had to do was sit and wait.

When the masked waitress eventually came she only took orders for drinks, took that away, then came back for food orders. Drinks came and we drank them and the food took its time. Some ordered a second drink to go with the food and just as the last of the sustenance vanished so the first red riders arrived. Useful because they (John) took a group photo.

We were in no mood to linger as rain looked a possibility and set off towards Barnburgh. We made a good 200 yards before Tina pointed out that I had a flat tyre! A pub car park was handy for roadside repairs (new valve core and a squirt of Stuart’s gas) and we were off again. The last time I had been along this road it had been flooded near the nature reserve, but all was well as we headed towards ......

Well Mick needed to know where Montague hospital was (no medical details being revealed) so we did a slight detour - no I wasn’t lost! We paused for him to take it all in and for others to shed raincoats before continuing homeward.

The biggest kamikaze insect in the county complete with barbed stabbing thingy caught me on my left ear! Fortunately bee sting allergy is not one of my failings (and there are many) so I was able to soldier on. Through Denaby to Conisbrough and by this time thinking “I’ve got to get home”. Unbelievably I was getting sympathy! We avoided the hill up to Crookhill and looped past the garden centre and dump-up site before turning left to five lane ends and from there back down Apy Hill Lane and back to the cricket club.

It had been a shortish ride but I enjoyed it. Look forward to seeing everyone next weekend! 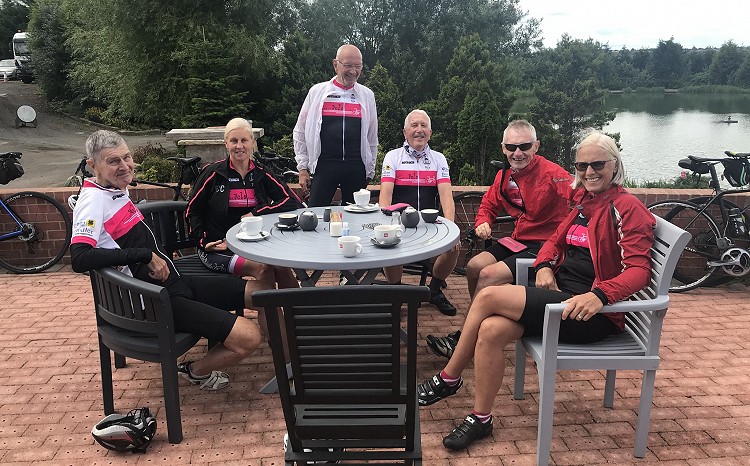