The “blue” refers to the ride not the colour of skin as we loitered in the car park wondering if there would be a ride. It was cold - 2o when I set off, colder for others and we were aware of ice. So it took quite a while to agree, firstly that we would go, secondly which roads to avoid and thirdly some obvious safety thoughts. Some decided to go home and that was a reasonable decision for them.

Its not a long list there were three of us for the blue ride, Martin Crapper, Nick Kay and Rob Stevenson. And we set off cautiously!

We could see ice where there wasn’t any as we headed east but by the time we got to Stripe Road and turned right we were a bit more confident although still taking it easy. We were spending a lot of time watching the road surface and avoiding puddles and mainly trying to get warm. We were assuming that all corners and sharpish bends were danger spots. You got it 3 old dears out for a spin. Sorry you 2 but it had to be said.

As we went along the the main street of Harworth (Scrooby Road) it was clear that slopes or hills rising towards the south where the sun didn’t reach were where problems might be but generally the roads were OK. As we dropped down the hill towards Bawtry road, the sun had done its job and we could freewheel flat out. A left at the end and right into Gibbet Lane should us what lack of sun and overhanging trees could do - lots of icy spots. But we were OK and made it safely onto the Great North Road were the road was clear; no ice very few cars and a fair bit of sunshine. We were enjoying ourselves and taking turns in front.

Once passed Scrooby and Scrooby Top we turned left to skirt Ranskill and headed towards Mattersey. Not much traffic and what we saw was not worrying us so the long road was filled with sight seeing and chatter (that’s talking not the result of freezing). We headed along Eel Pool Road and then on towards Clayworth. Nick had said as long as we had a tow rope he was oK for going up Strawberry hill. We lied and went anyway and that was “interesting’. Having agreed to regroup at the top we were each going to make our own way at our own speed to he top and then wait. Rob did a Rob and seemed to go flat out (these things are relative of course) I went sedately and Nick crawled.

I was fascinated by the crunching roof thin ice under my wheels - Gravel bike tyres with tread - and made it to the top without any bother. Rob was waiting and complaining that his back wheel kept skidding when he tried to stand to get more pedal pressure. Nick was a long time coming. When he arrived he had had trouble with his rear wheel spinning so did the right thing and went as slow as he felt safe.

The dual carriageway was ice free so Nick made his way to the front and lead us along until we reached Saundby where Rob took a turn. I did the right thing and lead from the rear. Well its all out seeing that the team are safe ( isn’t it ?).

The Café was not quite empty when we arrived and filled up slowly as we sat in the sun looking out over The Mediterranean Sea. Not like me I know but I tried a Dime cake slice which was like multi layered Millionaires cake and delicious.. We seemed to sit and talk for a long time and not just because Rob’s bacon sarny was a long time coming. Part of the conversation was about the way home and having guessed which was the safest way we set off to Misterton and then followed the direct route to Graizelound where Nick left us to go directly home. We 2 turned left to avoid Haxey and go directly to Westwoodside and were overtaken by a largish group of cyclist who proceed to disappear in the distance.

I confess to being a bit pooped and we had to slow the pace down a bit. From Misterton Nick had lead like his life depending on him getting there yesterday - he probably does that on his solo rides! But enough is enough.

We stopped in Westwoodside and opted for the main road rather than going on the side roads to Wroot as there was less chance of ice and the traffic was thin anyway. That was the most enjoyable ride along Sandersons Bank I have had. There was no traffic and a very light following wind. It was over in no time and we turned down Spring Road towards Misson. Still no cars, no Ice but a bit less sun.

Having gone through Misson the distant flooding as we looked towards the river Idle seemed closer although a long way down on the levels seen a year or two ago. And not a sign of life. No People and no cars for a long time. A nice day to be out after all.

That of course changed when we got to Bawtry. There were loads of people in our way almost looked deliberate! But we made our way passed the Crown and up the hill getting overtaken by a lone cyclist who seemed to take great joy in leaving us behind.

Rob decided to leave me behind as well and turned left into Harworth and home. I continued and did the same. Tropical weather next week please. See you then? 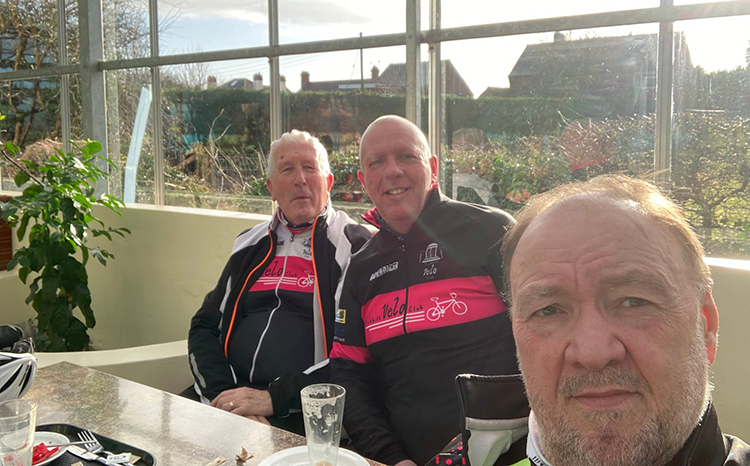