It was a quiet morning at the cricket club. The red ride had left earlier for the Humber bridge and there were only three Regular Blue riders plus a newby, there to try us out.

We chatted for a while getting to know Ian, before long a young man came up to us to ask where the football competition was. Tina explained although mixed up her lefts and her rights. Without dwelling on that we set off. There was an mechanical incident within 100 metres which I can’t describe. Oh hang it all, I can, although seeing as it involved a lady I won’t mention her name. She had a problem with her front brake so we stopped before reaching Sunderland Street. A quick twiddle with the brake shoes and a test by pulling on the lever - no better! A few more of those before she remembered “front brake - right lever” not “front brake - left lever”. Giggling like school kids we set off. Along to Harworth, through the industrial estate and down the hill towards the main Bawtry, Blyth road where we regrouped ( OK, John and Tina waited for us!).

We went through the Serlby estate and over Scrooby Top towards Mattersey. I could feel the road and realised that that feeling included every bit of gravel without the road hitting the rims on the back wheel. So we stopped at Drakeholes, spotted the slime oozing out of a tiny hole in the tyre and rather than whipping the wheel off lifted the back up towards the horizontal and slowly spun the wheel. A bit of pumping and that seemed to solve it. But it was sunny and warm so we paused a little longer chatting before setting off again.

Ian told us he liked loitering at the back and preferred not to use the motor on his heavy e-bike but we kept an eye on him anyway and so far it had been pretty flat. “Heavy” isn’t very descriptive but its on the wrong side of the manual handling Regulations limit and includes the weight of some pretty hefty tyres! There were hills (well, hill) to come and we wondered …..

Through Clayworth and on towards the canal bridge where we turned left. Ian still loitered at the back (rarely on his own) until we reached Haughgate Hill nick-named Strawberry Hill by cyclists - or is it just us? John and Tina again up front with Ian just behind them and showing no signs of sweat at all and me doing Ian’s loitering at the back thing. Again we regrouped at the road junction and after more chatting set off along the dual carriageway but in single file; there seemed for a while to be a lot more traffic. This eased off after the roundabout and we doubled up again. This time John and Ian at the back.

Reaching the café stop, Tina lead us round the back to the outside seating area, now completely devoid of cycle parking, and we dropped our bikes down the slope and onto the fence. In wet conditions the steep bank would have been a “No, No” but we made it.

We were sitting in comfort eating and drinking when another cyclist eating an apple and banana arrived, shortly joined by Gillian who Tina knows well and who I previously met on the Scarborough ride. She stopped to chat before joining her friend and then after a while we left for the return leg. The fixed part of the return was to go to Beckingham and Walkeringham then dependant on the weather either back to Gringley, Wiseton etc etc. or on to Misterton, Westwoodside Wroot, Finningley …….

The sun was out but the wind was up and gusting so I wasn’t sure but the concuss was take the long road home. Warning signs, which lied, told us the road was closed but we continued (like a BMW driver at a red light) along the main road to Misterton and beginning to appreciate that the wind was going to be a problem once we turned into it. But we were managing to chat and enjoy the ride so it can’t have been that bad. Realising that I had done the unforgivable (again) we stopped by a seat in the village for a photo. Took a while the photo because not being a pro the camera took a lot of persuading. Continuing along towards Haxey we turned left along Akeferry Road and into Westwoodside. We waved to Pete Hanks empty bungalow as we past, Pete being on his way to a holiday.

The wind blew us into Wroot but as we turned southish again it hit us strongly. Not as difficult as I expected but the wind slowed down the chatting. Along the straight section of Wroot Road as we past the old TIA café Ian agreed to test his e-bike for speed. He wound it up and his sensor said 17.1 mph with my Garmin saying 15.8 mph so I am guessing it does up to the limit of legal. With the motor off and 3” tyres (tubuless) using pedal power alone I am also guessing he would have been slower - I know I would have been.

We continued along through Finningley and then Bawtry Road - not Tinas favourite road apparently. I have to agree it is a bit boring and with the head wind - but what choice do you have when the alternative is down the side of the airport runway on a very rough track which would have left her very nice carbon wheels in tatters.

For the first time (ever in my case) we got into Bawtry and turned right without seeing a car in the way! We made it up the hill with the wind on our left so not quite so difficult and back to the cricket club. Altogether a really enjoyable ride, You would have loved it guys. See you next week? 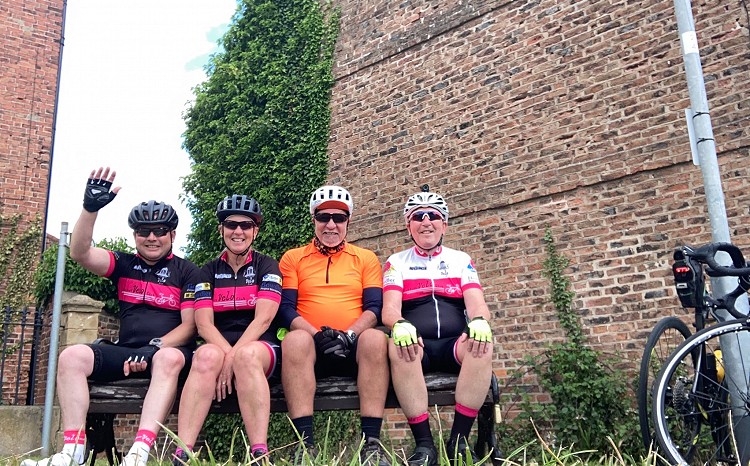