A lovely sunny day greeted us as we met at the cricket club. More Red riders than Blue but the numbers are growing. For some reason (maybe the early morning frost) everyone was in mid winter attire — except me in shorts and short sleeved summer shirt but I was never going to admit I might be wrong. It was great to see fresh faces and we set off towards Harworth - slowly to be sure we were all able to stay together. And strange to have new conversations with faces we hadn’t seen for a long time!

We continued cautiously along to Serlby enjoying the countryside the open road and the weather. The route took us through the edge of Ranskill and on towards Mattersey. With little wind we made good progress taking Job Lane and then the road to Sutton. Traffic wasn’t heavy but it did seem fast and often close and there were no incidents.

Just before the Job Lane turn we were overtaken by a 12 strong group, clearly a club ride but I didn’t recognise who they were. Throughout the ride we were seeing club rides going the other way and plenty of small groups and single riders. We stopped a couple of times to tighten up the group but continued without real problems. One of the stops was to see if a lone rider needed help. He was waiting for someone to turn up with an Allen key to lower his saddle — said someone turned up just in time to save us getting ours out.

Crossing the main road (Bawtry-Retford) was easy — no traffic — and so was the rail crossing-no trains. We made out first planned pause at the junction with the A6340 and the made our way from there via the potholes to the big A1 roundabout. Just a small ride to the park entrance and welcome to more potholes! Must be close to being the worst bit of road around.

Once we turned off towards Hardwick village and had bypassed the gate we were safe from traffic from behind and made good progress to the lakeside café. There are now lots of new tables and chairs, barriers to control the crowds (!) and plenty of people to warrant the work which has been put in. We found two tables to sit around and queued for our drinks and snacks, pricey but huge so no complaints and it was warm in the sun.

We were able to use the loos - oh the excitement! But eventually we were off partly the way we had come but diverting to make it back to the A57 and from there along and down Sparken Hill. “Enjoy it while you can” should have been my mantra. Before we got too far and to add to the drama I had a flat tyre. Being tubeless (the tyre not me) I expected to see signs but there were none so thinking to just pump it up I set to - and let Rob do the hard work. Well he need the exercise, he was having an easy ride with us.

I made it a few miles through Worksop and out the other side before we repeated the exercise (including (thanks again Rob) the pumping). I think by this time I had realised that one of the big pot holes had caused the problem and out was a leak around the rim and not a hole.

We eased our way through Carlton and Langold and by this time it was quite warm so the attire was by now appropriate. At the turning to Firbeck we said goodbye to Rob, Tina and Christina and tootled along to Oldcotes where we did a final tyre pumping (where was Rob when I needed him?) before making our way back to Tickhill.

I enjoyed the ride and it seemed to go well with the others. I hope for even better weather next weekend and hope to see you then. 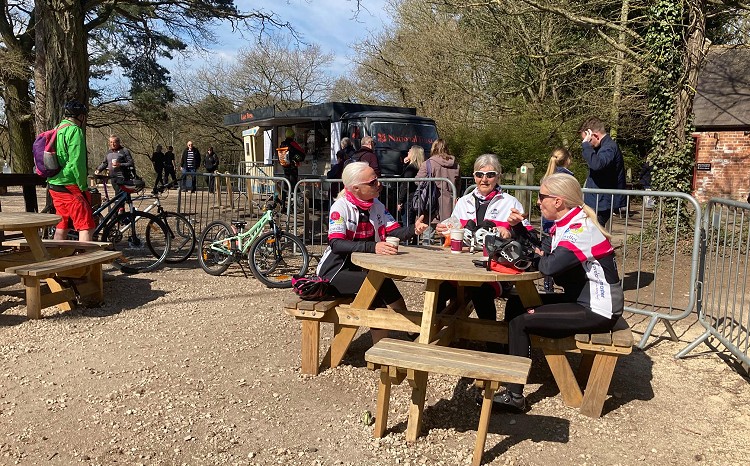 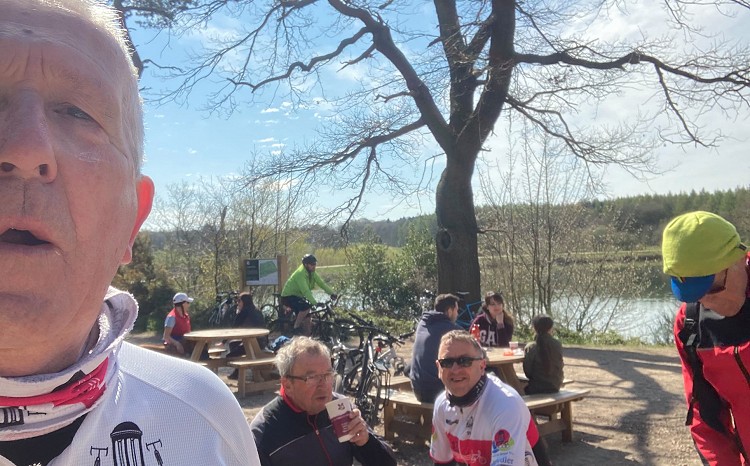