For the first ride at the end of lockdown there was a lot of expectant chatter in the cricket club car park. I arrived to find a circle of members social distancing and comparing experiences. It was good to see so many. We sorted ourselves into groups of 6 or less - the blue ride had 4 cyclists.

A little more discussion - started by Martin Bagshaw who outlined the principles of protection for the riders and followed with a change of destination. Interestingly we were going to use different routes rather than 5 minute separation but all ending up at the Happy Café. And that turned out to be a much better decision than we imagined!

We 4 on the blue ride set off towards Bawtry but turning right towards Harworth. A request designed to avoid the hill before we were properly warmed up. OK put your own twist on that! We turned left at the second roundabout and went up the main road and down the long hill to meet the A614 and back into Bawtry. Straight along with light traffic turning right at the Methodist chapel and under the railway bridge.

We stopped in the turning just beyond the bridge for a discussion on the detail of the route. The full length of Idle Bank (via Misson) or half the length (through Wroot). Wroot won but before we set off Diana Simpson appeared en-route to pick up Christina Cooper who were to become Blue Ride (2) and would also head to Sandtoft.

Off again but at a speed not usually associated with a blue ride and maybe not again! Along the road into the wind, tiring but didn’t seem to be holding us back. Into Finningley and right along Wroot Road past the White House and across Bank End Road. There was little traffic and we continued to make good progress. Somewhere here we realised that we were going to be cycling into a head wind along Idle Bank with a choice. Again taking the cautious approach we turned left in Wroot cutting considerably off the length we needed to be on Idle Bank.

We could see a light aircraft in the distance so guessed the entertainment was “on” and pedalled furiously to get to the café. There were other cyclists there but getting ready to leave so we were able to find a table outside without any trouble. We had more trouble finding the entrance to the one way route to the service counter! But it was a system which worked.

Kevin “earned his money” by signing as a contact for us all and we ordered and took our drinks to our table. We drank and ate and slowly the other tables emptied. Conversation was centred on lockdown experiences and bike holidays (or is that biking?).

Mick’s bacon butty eventuality arrived and when we were all done Diane trotted off for a second coffee to drink whilst we waited for Diana and Christina to arrive. Quite quickly they and the various Red riders (and Andy S) came and found seats. Social distancing left 3 or 4 standing but they probably had sore bits so didn’t mind!

Festivities over we got back on the road looking positively to the following wind the full length of Idle Bank. Didn’t happen! The wind moved round and was more or less in our faces all the way. We made fantastic progress despite having to watch one of the red groups overtake and disappear onto the sunset(?).

There’s a lot to be said for the welsh Thomas tribe. G only does his stuff in front of the crowds on telly. Our very own K saves the best for his friends. He claimed later in the week to have picked his spot. But soft verge, a foot drop and K bravely took to the field “a la horizontal”. It could have been exhaustion after building us up briefly to 23mph but he said not taking it on the chin like G would have done.

The hard bit came on Bank End Road where the wind and traffic slowed us down but turning left towards Misson we were able to pick up speed again. You will be pleased to know that in Misson Diane made the corner like a pro this time (ie upright)! The journey back to Auckley was uneventful and we paused for a while to say goodbye to Diane who turned right for home and we now three turned left into Bawtry and from there direct to the cricket club.

The chairman had waited to greet us (?) and we were able to tell him the format worked well. Small group - ideal. Common coffee stop - brilliant idea.

Thanks everyone I hope to see everybody next Sunday and many more Sundays. 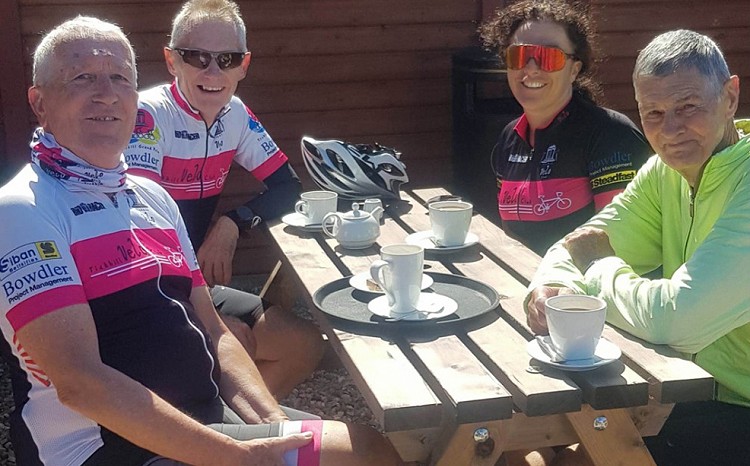