(That should do it)

The weather was more like spring than mid winter as we met at the Cricket club. The roads were wet as it had poured down an hour or so earlier but the forecast was good for a period long enough for a decent ride.

We set off leaving the Red riders to get more motivated and headed towards Harworth. The dreaded pot hole opposite the garden centre had been filled in but probably by someone with a sense of humour — we went round it!

I wasn’t feeling a breeze but then it was behind us as we sped along the road from Ranskill towards Mattersey which for a good half of its length is downhill even if only-0.5%. We took advantage of the boost and of the views. There was the odd cyclist going the opposite way, which was surprising given the weather, and they all waved or shouted a greeting.

Becoming an essential, and irritating, question-How did Job Lane get its name? -as we turned right along it. I wouldn’t normally embarrass the rider asking but since it was Karen Cleminson I thought I should !

With little wind we stopped for a breather and chat before heading along towards Sutton. Part way there we turned to Lound and with little traffic chatted our way along and through the village and then into Sutton.

We stopped again at the main Bawtry - Retford Road, as much for explaining where the café was as for regrouping.

Within a few minutes we were at the café with bikes locked to an outdoor table and ordering drinks and snacks. There was only 2 other customers there so we chose a table in the middle against the window.

Coffee and cakes were good and time passed easily. One member of staff took it upon herself to test every one of those model birds to make sure the batteries were not flat! Difficult to complain of that in a wildlife centre.

We set off with a rising wind but not strong enough to worry about. Left at the main road and then left into the industrial area — avoiding the temporary lights on the way into Retford and missing all the cars. I think we were looking forward to a bit more for the following wind too.

A couple of left turns and we were on Till Lane heading to Clarborough. A nice quiet road, no cars and I did threaten to join a breeze ride if the chatting didn’t start up again. Its like echo location — helps let you know there is life back there! There was very little traffic all the way through and no more as we reached Hayton. We followed the road over the canal bridge and were half way along Clayworth Common also known as the B1403 when a solitary rider came towards us. Magenta stripe across the middle — it was Rob Drohan - who managed a cheery wave as we tried to look a bit more professional for his benefit and continued on our way.

Pete decided to head for home and left us in Clayworth taking the direct route to Gringley and from there home. We continued along easily and as we were now four rode in pairs where we could. As we reached Drakeholes we knew we were going to be heading directly into the wind. But I think we over imagined it and found the going easier than we imagined it would be. Mick might not have agreed and mentioned that he was going to leave us and go straight home from Ranskill. I also got confused!

In Ranskill we said our good byes with Mick going straight on and David and - and that lady whose name I forget were going to follow me towards Serlby. So round the corner and there was Mick and the other two nowhere to be seen. I might start writing these things down! Any way since it was only me and Mick we wandered through the Parkland over the main road and up the hill to the industrial estate. Mick really did leave there and turned left to who knows where, whereas I went hoping to find my way back to Tickhill on my own! My wife wants to buy me a tracker - I might let her! Since there was only me I cheated and went home cutting 250 yards off the club run; sorry everybody but you would have seen that on Strava anyway!

Sunshine, moderate heat, good company, and a fantastic cafe stop are probably on the cards next Sunday, I hope to see you then. 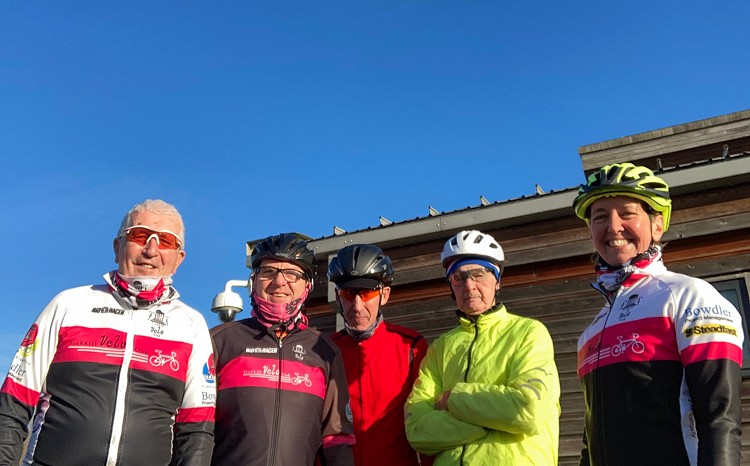