A nice sunny bank holiday Sunday so I guess a small group was to be expected. This was to be the first ride for Chris since October and I don’t remember seeing him in 2020 at all. I emphasise that word “remember”.

I confess I knew the face but couldn’t put a name to it and no good asking Mick! Mick, thinking he was going to be late, cycled over flat out and wasn’t into memory games - or much else really.

We set off towards the Buttercross in single file with loads of cars - mainly going the other way, towards the coast(?).

Down passed the mill dam it was pretty quiet , a bit noisier as we went on towards the main road (A60) most of it being complaints about pot holes. Lessons learned from last Sunday and I had long sleeves and more layers so I was warm enough to think. I spent the next few miles going back through rides to see if I could work out who Chris was!

Going up Malpass hill made me realise that we needed to slow down to keep together but we made it to the lights at Oldcotes fairly close together but miles away from remembering! Traffic wasn’t heavy on the way south but it was fast and close so we kept on in single file.

In Langold I had a change of plan - the reliable NHS memory aid! He wasn’t an “A” , I’m pretty sure I went through all the names beginning with “A”. I had cleared the “B”s by the time we got to Carlton. I knew who he was the moment I got to “C”!

As we approached the right turn onto Owday Lane there were 2 cars stopped to turn and with 50 yards to go a third car screeched past and swerved into line stopping just short of those cars he obviously hadn’t noticed and narrowly missed me. At least he had the decency to apologise!

As we pulled round the corner it was time for a short pause. As I stopped Chris pulled up behind and said “you do know I’m Chris Higgins don’t you?” All that wasted thinking!

There was little breeze and plenty of sunshine as we pootled along enjoying the scenery but still in single file. It’s a long straight road and we had to regroup at the end before turning right towards Woodsets. Mick did tell me he could have spent 2 more hours in bed if he had known! Didn’t offer us coffee though.

We were through Woodsets quite quickly and up the hill towards Dinnington whee again we were a bit strung out so found a gate and had a quick get together. They never last long and we were away with the sun still overhead as we turned into the town centre passing Rob and Tom Drohan (the purple ride) going in the opposite direction.

It’s a simple route through the town and across the main road then rising towards Laughton where we took to the side roads before reaching the café in brilliant sunshine. Table service only and most tables were full but one of the waitresses pointed us in the right direction to a free table round the back ( which used to be the front!). We ordered just before the first cloud reached us and slightly longer before the rain started. We took advantage of the offer of a parasol and braved it out. Fortunately it wasn’t too bad and we did enjoy the good and drinks.

With cloud the temperature was dropping so we didn’t dally and set off towards Firbeck. It was much cooler but not raining although wet on the road. At last we were able to cycle two abreast or at least two of us could! We went through Firbeck and up to the main Oldcotes to Maltby road where we turned right and headed into Oldcotes - in single file again. Straight over before turning leafy towards Styrupp. At this point Mick took his leave having decided to do a few more miles so he didn’t get home too early.

Mysterious Chris and I carried on, two abreast, into and through Styrupp, left at the roundabout and along towards Stripe Road. The rain had obviously been heavy as the puddles were well into the road from the verges. We had been lucky! We even saw Frank ride cycling cheerfully home.

I’m not sure why but we went back to the cricket club on the faint chance that we might meet other returning riders. No such luck! It had been a good ride, nice easy pace, little breeze and decent weather. Looking forward to next Sunday.

Apologies for the photo, I was trying to leave me out! 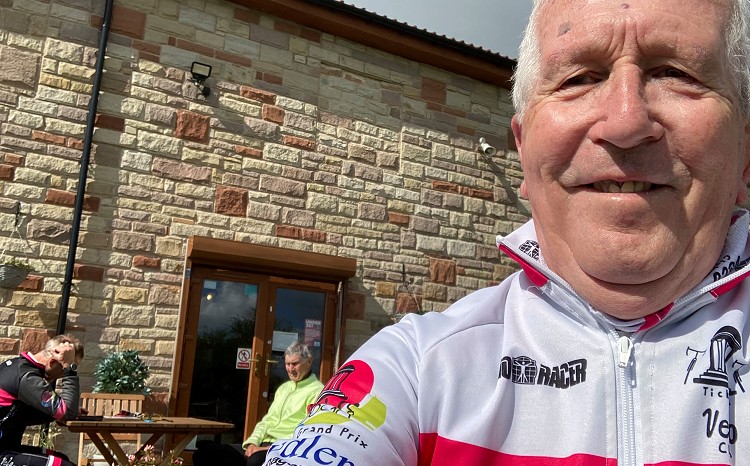