Blue ride to Leger Lakes - or a case of one down but found under a parasol.

There seemed to be loads of bodies milling round in the car park quite a few unknown to me so I waited for the red ride to leave to see who was left!

We set off at a gentle pace towards Bawtry but turning off towards Harworth and then again towards Styrrup. There was a slight breeze and plenty of clouds but I think we were all confident it wasn’t going to rain. Even Nick!

The pace was initially advised by Pete who warned that fast and flat or perhaps slow and steep would see us all being introduced to his yesterday’s Chinese takeaway! After a while we all seemed comfortable with the pace and simply carried on. Though Styrrup we went and on to Oldcotes doing a quick right and left before stopping near the church in Oldcotes for a head count. 6 bodies and 6 heads - a good arrangement!

6 male riders in pairs all chatting loudly! It was turning into a nice, social ride. The planned route (save that thought) took us along through the middle of Langold, through Carlton and saw us turning right (signposted to Melbourne) along Owday Lane.

It’s quite a long stretch, the road, and we kept together well - except for Matt who stopped to check on random road features interesting countryside but caught us up well before we turned right. At this juncture Mick advised us that he could have had two more hours in bed if he’d known we were going this way. To be fair I only put the destination on the Facebook page and only one person asked for the route (and then couldn’t come!)

We travelled on through Woodsets and beyond. We stopped for a chat on the way to beyond and decided on a change of route. We were eventually unanimous in deciding to turn left up Woodsets Road avoiding the steeper hill of Swinston Hill Road. Having chatted amiably to a passing pedestrian we set off.

Easy paced we turned left up the hill in single file and I was about 75% up when Matt caught me up to say he couldn’t see Mick. So we eased off the pace allowing Pete to say “he’s not there”.

Somebody had to do it so I left the remaining four to loiter by the roadside and went back down the hill. No sign of Mick anywhere! Back up the hill slowly investigating all gateways on the off chance he was having a senior moment or a picnic in a field. Eventually met with the others and had a more serious chat.

Leaving the remaining three to continue slowly and to meet up at the junction in Dinnington, Nick and I went back down the hill to where we had last seen Mick. Coincidently the pedestrian we met earlier was there and told us the old guy in yellow was last to set off but only went a few yards before stopping to glare at his bike. After a few minutes he had set off. So we now thought he must have gone straight up.

At the top of the hill we met up with the others - still no MIck - and decided to carry on. No point point ringing Mick if he had his phone he wouldn’t answer, If he left his phone at home his wife would answer and possibly panic. And anyway we were ready for coffee and it had clouded over.

We set off again making our way through Dinnington and out to the staggered junction at Throapham and up the hill into Laugton. We had no real expectation of finding Mick - we would have caught him up by now So we cycled into the café and around to the front to find Mick and two alpacas - Mick under a parasol and the alpacas in the field.

We ordered and sat outside in the sunshine - under a different parasol and since the sol had gone in it was a bit cooler. we enjoyed the drinks and cakes - cooked stuff was off for some reason connected with either being busy or a clean frying pan! Ian had decided to go home as he lived nearby and Matt was going to see his Mum so the remaining four of us set off towards Firbeck.. It had definitely got cooler so we speeded up a bit to get warm and kept in pairs all the way into Firbeck. Mick remembered a promise to do some housework so turned off up Kidd Lane and hopefully arrived home safely.

Down to three we continued through the village and then up Thornbury Hill Lane. Nick dashing ahead but waiting at the A60 junction. Both he and Pete were going to cycle back to the Isle together but came back to the cricket club just to say goodbye.

An interesting ride, some confusion, plenty of conversation, putting the world to rights and planning for better things. But the ride couldn’t have gone much better. There is always something to be gained from problems - especially someone else’s problems!

Hope to see you amongst a bigger group next week. 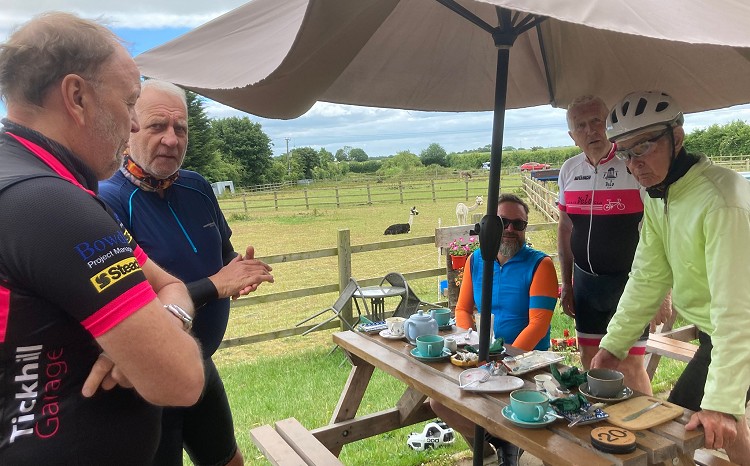