We were 6! And they were: Martin Crapper, Christina Cooper, Mick Lee, Nick Kay, Brian Barron and anonymous ANO a newcomer. For ease of reference I will call him James.

It was all a bit embarrassing really, not because James was probably an undercover agent (spy) trying to look anywhere but out on a bike, but because Brian was confused about the season and turned up in shorts and pretty ankle socks. On the plus side he does have a great sense of (Scottish) humour - Brian that is, not James - he was almost normal!

Having got all the intro’s done we set off at a cracking pace and had to wait at the gate for everyone to catch up. It was going to be a normal Blue ride.

Along we went to the stripe road junction where I waited again and this caused some hilarity as “they” were inches behind and could not appreciate why I stopped. Once away, we settled down a bit and it was good to have Christina on board and talking because I could determine who was where without looking round. That’s good really, I’ve threatened to do breeze rides in the past - it’s like free radar!

Right turn at the first roundabout and on towards Styrrup. I was feeling comfortable with the temperature and light wind and the going was easy. Until we got to the far end of Styrrup and reached that slight slope - a minor punishment for avoiding Malpass Hill.

Weaving our way through Oldcotes we reached the Worksop road and turned South. There was’t as much traffic but more than earlier and most drivers either didn’t want to get their cars dirty or knew the Highway Code had changed so we were safe and comfortable.

The sun was out and often in our eyes, but you can’t complain about everything.

James, 003 ½, Bond is probably a Red rather than Blue quality rider but mingled well. Somebody did well to con him into coming.

Sorry I digress. We went south through Langold, Costhorpe and Carlton before turning right towards Woodsets. A high pitched scream brought us together, not Brian but his fault as he decided a) he was cold and wanted to go home, or b) we were slowing him down and he wanted to go to Worksop. Whichever it was we stopped chatted and parted company and hopefully he had as enjoyable a ride as we did.

It was pleasant cycling along Owday Lane with the sun flashing through the trees or simply keeping us warm as we made our way West. We did have one close pass which I think was along this stretch but not one to worry too much about.

We turned right at the end of the road and headed towards Woodsets. Mick did offer us coffee, but we thought if we stopped we would not get going again. And he probably wasn’t serious!

Once through Woodsets we headed towards Dinnington which means a reasonable sized hill ( sorry, slope). We got to the top and coasted until we were all together and made our way through the town.

Faced with a choice as we left Dinnington I slowed to consult at the roundabout. Didn’t work of course, there was too much traffic so Nick and Christina swept past and I was left shouting “LEFT” and we were committed to Laughton Common in less than a blink! Seemed safest at the time and worked well.

So we went to Laughton Common and then turned towards Throapham and then into Laughton en le Morthen. Thanks to some latent memory and Matt Lowe’s paper round we went round the back roads to the café.

It was a nice day so we opted to sit outside and eventually got served. One other cyclist came to the next table and mentioned he went past the red ride going along stripe road. That was a snippet of irrelevant gossip not to be confused with important announcements elsewhere here.

He got his order in moments before a big group of cyclists arrived and they went to the other side of the building. They probably thought it was going to be posher than where we were. But another rider came to join us - lady Di of somewhere or other. Diana Simpson added that extra touch of class to our table.

The scones were exceptional - much much better than the last I had. We chatted for quite a while before deciding to set off again. Fortuitously another group of three cyclist arrived just in time to take our photos and just milli-seconds before Christina took to the skies.

The moment we went through the opening onto the road the cold wind hit us! Seemed like a serious drop in temperature. The wind was slightly in our faces but as it wasn’t strong we were not too put out.

We were put out as we reached the trees. A car approached from behind and being the kind of folk we pretend to be we collectively decided to pull aside and let her through. The consensus was that she might at least have looked grateful.

So we continued and went on our way and before long we were in Firbeck. There is a long gentle slope into the village and we took advantage meaning we were well stung out. Another of those shouts and Mick disappeared up Kidd Lane. He had opted to go home to Woodsets direct rather than heading for Tickhill.

The rest of us carried on and just past the pub I heard Nick reminiscing to Christina about how she went over the handlebars just about thereon a previous ride. Tactless Nick! I’m sorry you missed what happened later Christina!

Anyway we continued and at the main road said goodbye to Christina who was bound for home to prepare for work later.

We were down to four. Nick and James up front Diana and me following. Nick and James waited at the top of Thornbury Hill for us to catch up and we just kept on and overtook them.

Within seconds as Nick set off there was a great curse and we turned to find him on the floor next to his bike. Feet and bike apparently got tangled and down he went.

After a few minutes of adjusting displaced mudguards he was fit to set off, probably in pain but no great injury.

It didn’t slow things down and before long we were at the end of the lane and onto the main road back to Tickhill. Leading from the back sometimes works well but not when those in front don’t know to ask. The long and short is we went straight back to Tickhill missing out my magnificent diversion around the environs. As it happens it suited as we were pretty cold.

Nick and James went straight on whilst Diana and I turned into the cricket club and stopped for a chat before making our way to our homes.

A short but very good ride - thanks everybody and hope to see you next week. 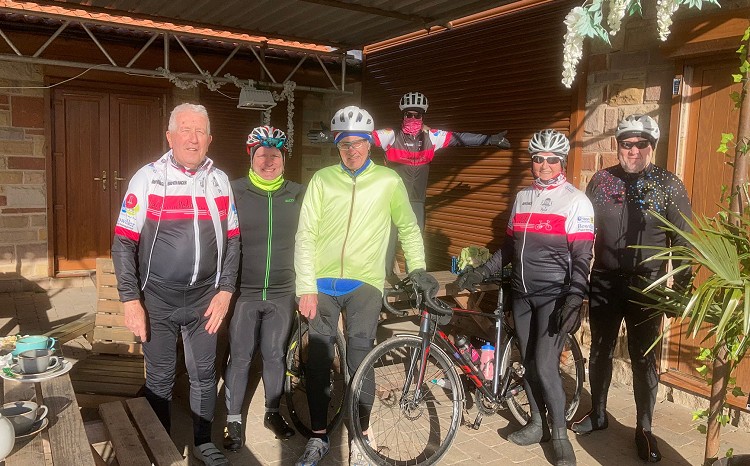