Blue Ride to Lotties at the Butterfly Farm

Thirty Two degrees was forecast on one of my Apps, Will anyone turn up for a gentle stroll through the countryside? No doubt at least seven others thought the same. I, for one, was pleased I hadn’t gone on the cleetthorpes ride with the red group. But turn up we all did, we seven, and after what seemed a lot of chatting we set off AND….

AND….  then John Huggins, a very welcome sight arrived and made the numbers up to eight. Always good to have an even number - there will always be a good part of any ride where you can ride in pairs. But first we had to get off and managed that maintaining the chaotic order for the short distance up to the Buttercross - that red car we had to wait for as we waited to turn onto Sunderland Street was mine - my wife doing her Sunday Chores.

Never before have I got lost in Tickhill. No no! Missing the turn onto St Mary’s gate was intentional, You all needed to know that Church Lane was just around the corner and that it lead to Apy Lane just as easily. “We are not going up Apy Lane” came a lone cry from the back - “I’ve just come down there”. Imagine that with undertones of criticism and you get the message. Not me though - its all part of that pleasant advisory system that says we are all together keep going.

And we did, up a very well used Apy Lane, left, right, left and into Braithwell. Although the sun was trying to beat down on us the slight cool breeze made the riding easy. Over the junctions and on to Micklebring with light breeze but heavy chatting we seemed to speed along. Then a very sharp left in Micklebring onto Back Lane where I managed to lose Brian and Jon (not intentional) on this ride previously. But not today we were keeping close and the conversation animated.

Good views in all directions, crops coming in, the land parched but it is what it is and we were enjoying it. At the end of Back Lane we turned right and then left towards the Hellaby Industrial estate. The roads seem smoother than i remember them or maybe i was a bit stronger - either way we sped along. Heading towards Thurcroft the ups and downs warranted a break which we took in a gateway with a tree to provide shade. Before long we away again and were at the double roundabout where we turned right and left and were into Brampton before we new where we were (should that be “I” and “was”?). And even quicker we were in North Anston and, avoiding the steep hill, went round the houses and out the other side and into the sun. But only for a short while and then into the café

John H had to leave us at this point and make is way home but the magnificent seven ordered drinks and food and waited around a table under a canopy for it all to arrive. You go to some cafés and conversation is stilted and service slow, here service wasn’t the fastest but the conversation made sure we were not aware of it. No scones but cakes and coffees were well worth any wait.

As we were leaving we paused for a photo, Lawrence took several and I chose carefully. If you look equally carefully in the top left hand corner you can probably just see John H rounding a corner on his way home near Leger Lakes!

Setting off we turned left out of the entrance and left again towards Woodsets. Approaching a tee junction we were thinking of slowing down when kamakarze Nigel though to wipe us all out and then thought better of it and swerved back to his own side of the road. You can do a lot of damage with a little moped but not today. We headed on to Woodsets where Mick left us to make his way home and then continued on to Gildingwells and Firbeck. No more incidents but plenty to chat about.

Once through Firbeck we paused at the main road to give Maltby dwellers time to decide which way to go - Tickhill it was - so we continued up Thornbury Hill Lane, down the other side and on into tickhill. Christina for some reason didn’t want to do Apy Hill Lane for the third time in one day so she, and Kevin, left us at the Buttercross and went the Wilsiic Lane way.

The remaining three of us wandered along to the cricket club before separating to go home. A good result. Weather 0:blue ride1. Should be cooler next week guys! 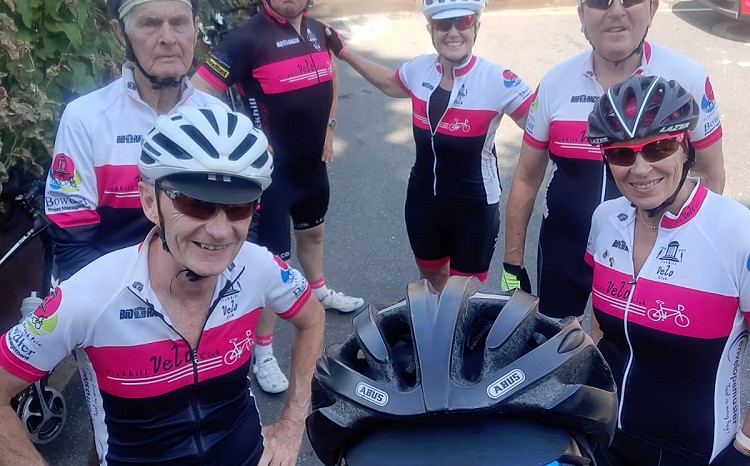