Blue Ride to Moss and the Hayloft Tea room

Lovely looking day, freezing at first and making nonsense of my decision to wear shorts and a summer short sleeve jersey. But hey ho we can’t all be wise! The Cycling was slightly delayed as we sang happy birthday and then waited for the red riders to leave on their journey but eventually we were off.

A nice ready pace of around 12mph saw us making our way in single file along to the stripe road crossroads and making our way towards Rossington. Confirmation that it was cold came from Christina who called out a stop to give Mick the chance to get his gloves on, Not his proper winter gloves but enough to keep him warmish.

There was quite a lot of traffic and that kept us in single file and would for about half the outward journey. In Rossington I confess to an error of judgement - I didn’t give enough warning to those behind that we were going to turn right towards Go-Outdoors and at least one of the following cars gave those at further back grief. A lesson learned for me and annoyingly I have see why Matt Lowe does what he does on approaching junctions. Maybe I need to do the course!

We waited at the right turn onto the Great North Road for the traffic to clear and still managed to get split into two sections so paused again just after the lights on Hurst Lane. Once regrouped we were away again with the sun out and sadly a breeze. A bit easier in terms of traffic along and up to the lights where we turned left towards Branton but still sticking to single file.

Again there seemed a lot of traffic as we waited to turn right towards Armthorpe and, thinking we were all ready, set off. There was drama in motion (or not) behind us as Paul hit the deck at slow speed. We were alerted to this by shouting. With being busy we were not aware of what was happening and only slowed expecting the back group to catch us up. But having caught us up we set off again. I had to wait until we reached the café stop to tell Paul to be less selfish and fall off at the front in future where we could all watch. I guess that was the second lesson of the day and we no doubt all learned from it. He wasn’t hurt and didn’t seem upset by it.

We followed Nutwell Lane into Armthorpe and turned at the roundabout along Mill Street and Hatfield Lane which currently completes well in the chase for worlds most pot holed road. Still in single file we continued across the West Moor Link and then the A18 and onto Armthorpe Lane. Although there wasn’t a lot of traffic on Doncaster Road/Station Road we queued for a gap before setting off more or less together. Only when we turned left onto High Street in Barnby Dun did we start to think we were leaving the masses behind. Having slowly turned left over the bridge and then right onto Thorpe bank we were really into the best part off the ride - Smoothish road, well the pot holes were all properly filled, and very little traffic and that all coming towards us in one with long gaps between. We made good time along Mere and Trumfleet Lanes despite having one or two go slows to keep us all together.

At the café the sun was out the cycle racks had enough spare slots and there was a table free! We ordered upstairs and came down to the comfy chairs on the courtyard and waited to be served. My coffee and Toffee cake were well worth cycling for, shame though they didn’t have scones.

There were other cyclist there including one who seems to have done half the county before he arrived and was going to do the rest soon!

But the really good news was that the loo was open - once you found it of course. All in all a very good stop with a king soap taking a photo for us.

Back on the road we headed towards Askern with Paul up front. But he didn’t seem keen on my 12mph and drifted ahead until we reached the town and he dropped back as I went in front to make sure we did a lap of the lake. We didn’t need to but a bit of excitement never hurts.

After circus navigating the lake we headed south ish and turned right onto Sutton Road where my brain cells switched off. We turned right at the junction and then left along Burghwallis lane. and I have cycled dozens of times this way. so why when we got to the junction did I turn right instead of left, Do a loop around, go passed the two turnings we had just made without recognising them and end up on Doncaster Road (A19). We had a think on Rockley Road and either ignoring the guy in the van who said “don’t go on the A19 there’s been a crash” we headed down the A19. Only a quarter of a mile to our right turn - but only 100 yards to the tailback from the crash.

We filtered through and arrived at the junction and accident just as the police and paramedics did. Looked like a motor bike had been wiped out at the junction and the motorcyclist was not enjoying life. Having turned onto Askern Road within half a mile was a car with a badly damaged front wheel and a police car in attendance. I am obviously either far too trusting or more likely far too naïve and it was Rob who floated the thought that this is the guy who smashed into the motorbike and tried to leave the scene. Far too much excitement for a Sunday!

We cycled all the way through Carcroft to Skellow to the point we should have been at ages ago and then as always walked over the bridge. All but Rob who cycled over the flat bit.

Once down we set off along Leys Lane with some spreading out beginning to show especially when we met a group of Cyclist who were club members (not ours) and having a good time. We regrouped at the Doncaster Road junction and they continued. After we took the right turn and then the left we caught up with them again and spent a few miles along with them. The hills were affecting us and we had a few lengthy pauses to regroup but no one was near the point of walking.

We went straight through Hooton Pagnell (is there another choice?) and headed towards the Barnsley road in Hickleton. Diana doesn’t “do” hills given the choice but that doesn’t seem to affect her progress and she and we all were looking forward to the long freewheel into Barnburgh so the few ups were ignored. Another stop to regroup and then we cycled down and then up Ludwell Hill before turning Right onto Pastures Road.

Having taken the rear for so long Christina went up the hill like a rocket and caught up with Tom and Rob just in time to let them know we were going right. I did my normal stately thingy and just made it without the boiler bursting! I was ready for a rest. Fortunately or unfortunately we got to have a decent rest before the downhill to Mexborough.

I like a good freewheel and set off thinking “when did we last do the freewheel race at Gringley?” the wind whistling through whatever remains in my head cleared further thoughts about that although I did notice you can get an awful long way without pedals on this bit of the road.

We, most of us, got to the lights took the path to avoid them and followed along till we reached the bridge and then stopped once we were over the river and railway. We waited and we waited until I considered it sensible to go in search of the missing ones. The shepherding was working and we hadn’t lost anyone! Once I got back almost to the traffic lights the tail end charlies came round the corner - a touch of cramp had caused the problem but was now OK.

We set off just too late to get over the railway as the gates closed. Another long wait for trains to pass and the gates to open before we were able to set off. The road through Conisbrough seemed uneventful but when the front group reached the lights at the Junction of yet another Doncaster Road we were on our own so turned into the pub just round the corner. Again we waited to regroup. “He’s got cramp and says we are to go on alone he says he will be OK” ! After some discussion we agreed that since he looked OK and had a phone it was a sensible solution. And if the ride were to finish there we had cycled about 38 miles. Before continuing the story I

should say I did contact him when I got home, He had had fish and chips and then caught a cab so ended safely.

We setoff again up Crookhill Road intent on getting home, setting off but immediately saying goodbye to Diana who was going straight into Doncaster to make her way home. The rest of us turned up towards Stringers Nursery and then turning left in front of the golf course and onto five lane ends. At this junction I expected everyone to turn towards Maltby leaving just me to return to Tickhill but Mick had driven in so joined me along the road towards the quarry and back down Tickhill Back Lane. I left Mick at his car and continued home.

It had been an enjoyable but eventful ride perhaps a little longer than normal so next week will be a nice short one - maybe Leger Lakes or Retford. See you then hopefully. 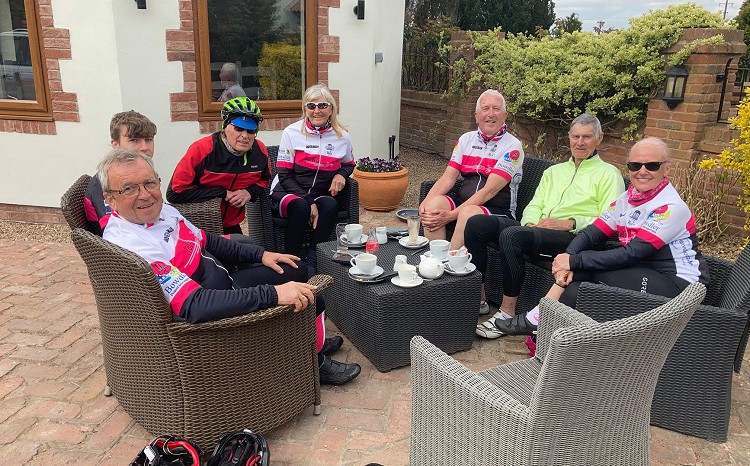 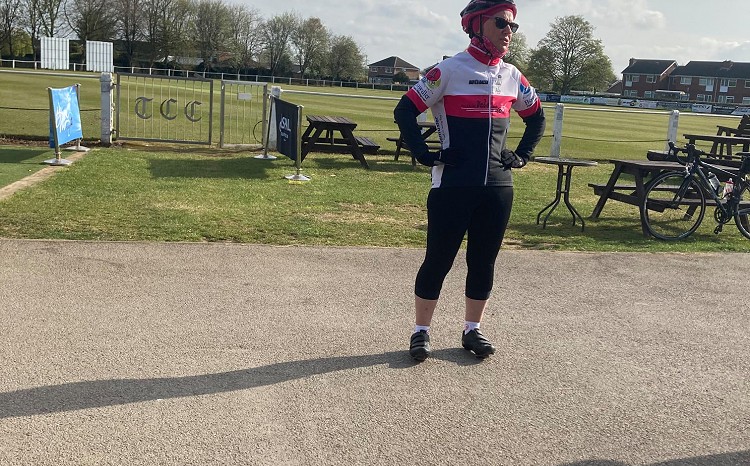 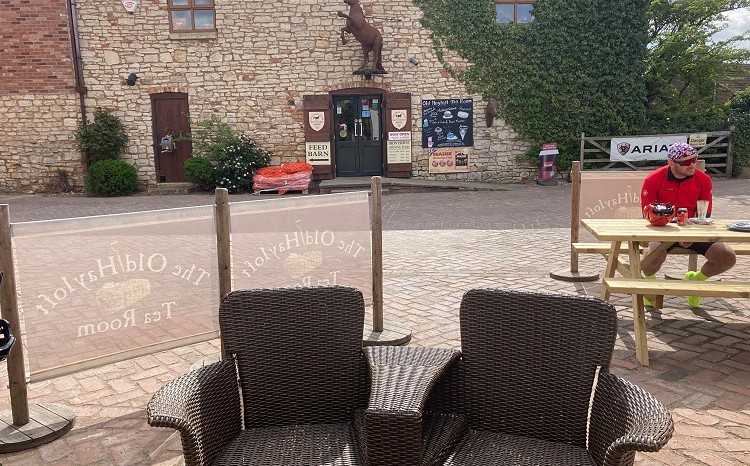