17 degrees already as we assembled in the cricket club car park. Where were you? Red or blue rides were available, forecast was brilliant and if that was accurate then it would have been your last chance for at least a week to ride in the dry. We were keen to get off and left the red ride discussing where to go.

We went East following Rob who couldn’t contain his enthusiasm. Fortunately it didn’t last too long before John and the sensible ones caught him up. Traffic was surprisingly heavy and we continued into Bawtry in single file. Road works were in full swing with all roads shut off although not to us - we hit the footpaths and worked through the repairs and onto Austerfield before turning right through Newington and onto Misson.

The views and conversation kept us going and the long straight roads seemed short and sweet. Until that is we reached Bank End Road where we turned right and into the wind with heavy traffic for company. The plan was always to take the first right turn, Idle Bank / Sanderson’s Bank and passed what used to be the Park Drain Hotel.

Tindale Bank Road is another long straight road that seems to go on forever, but not today. Turf had been lifted from vast areas of fields leaving distinctive lines parallel to the road. But just when you think it might never end there is the right turn onto Owston Road. With head down into the wind we seemed to be through Walkeringham and into Beckingham very quickly. I hadn’t enjoyed the busy main road so was relieved when John took us left on the quiet, straight, road towards the industrial estate and on to the river bank track.

Sticking to the path we dodged pedestrians and cyclists on the bridge, turning left and left again through the small green space onto a wide paved area I didn’t know existed. And the café was not far along, full but not far! We waited for a table a few minutes, grabbed a seat each and didn’t even notice all the later arrivals being served snacks on trays resting on the wharf wall.

It wasn’t especially slow service but the quality was good, drinks large and hot. We were in the shade so warmed our hands on the mugs when they came.

A group of 3 cyclists from Lincoln nominated the youngest to take the group photo and we were off again. Out of the shade and back into the sun! The difference I temperature was amazing!

But back over the bridge, only one pedestrian to dodge this time and back on the river bank track. But this time we had to dodge a large cycle group going the other way with fancy jerseys and from South Carlton (might have an ‘e’ in the middle).

Back into Beckingham and we said goodbye to Diana who was going downwind for a longish ride home. We three turned left into the wind past the Citrus café, passed North Wheatley and on towards Clayworth and at last downwind. Uphill but downwind!

The road along to Clayworth and then Drakeholes was quiet and we made good progress. The wind behind helped of course!

The roads seemed to wizz underneath and we were into Ranskill and out onto the Serlby road very quickly. From there up the hill into Harworth and Rob left us to take the route home. John was left leading just me! And then at the end of stripe road he left me to find my own way home!

Good ride John, thank you. And thanks to the other two as well it was a good morning out. 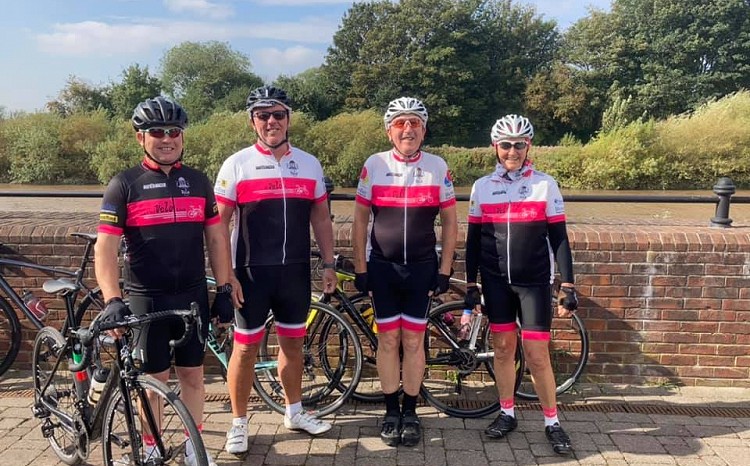