We came from different directions so had different weather experiences on the way. I hadn’t far to travel and hadn’t seen any rain, others weren’t so lucky. One poor Jackdaw having attacked Christina on her way paid the ultimate price! The bike was Ok though and maybe Christina won’t have recurring nightmares!

There was the merest hint of light drizzle as we prepared to set off but no more than that. The Red ride which numbered double figures was also going to Retford so we let them set off first assuming they would arrive first. We had plenty to talk about so carried on for a while before following out towards Stripe Road and then turning right to Oldcotes. The turning right was a bit of a shambles as traffic seemed not to see us but we made it safely and carried on to - - - - the roadworks. What would we do without them? That’s not a serious question no answers thanks!

Having passed the lights and the two roundabouts Pete decided to remove his rain jacket so we slowed down whilst he stopped took it off and then caught us up.

We settled into a comfortable pace, maybe marginally higher than advertised, and carried on catching up gossip-wise. Serlby came and went and we were soon on our way passed Ranskill and on towards Mattersey. It was turning into a really good day for cycling. No wind, warm and not enough traffic to worry us.

On the approach to Sutton we took a left towards Lound a road I’ve never been on before. Pretty village Lound with a distinct character, I’ll take that way again. We rejoined the route in Sutton and before long we were cycling in close formation towards the main Retford-A1 junction. Black van man couldn’t resist the sound of his horn as he passed at speed. With a white line down the middle and several hundred yards of clear road he might have been worried about his ability to pass safely! We crossed the main road after a pause and headed towards the crossing where we could see the level crossing lights flashing and you guessed - black van man. More haste big waste!

A group of riders caught up with us at this junction and before long the red ride came passed in ragged format! Jon Brought at the back - how did that happen!

We continued on and turned left along Old London Road and left agin along Brick Yard Road leading back into Retford. We could just see the last of the red ride as they turned off towards Gamston - so maybe they wouldn’t get to the coffee stop first.

I almost took the wrong turning in Ordsall ( twice) as we turned along high street, right along Goodemoor Lane and Whitehouses Road before taking the left turn and the main road into Retford. When we reached the square there were other cyclists but not proper TVC cyclists , they hadn’t arrived.

It was pleasant outside at a table for 5, the service was good as we were all served together and we chatted happily away ignoring the passing time. Just as we were about to leave the red ride arrived but from the opposite direction! They must have taken a long route around the town to get there.

We left, heading east, we need to watch the “left” and “right” instructions as some of us confuse the two. Regrettably even I do that. Not today but in the past I’ve said “left here” and someone has said “did you say left” and when I say “Yes, right” you can guess what happens.

We were turning left on the outskirts of Clarborough and were in Hayton fairly quickly and enjoying the pace. There were loads of cyclists in larger groups than we had seen for over a year but the consensus was that small groups work best.

In Clayworth we said “goodbye” to Pete who made his way back to Westwoodside leaving the four of us to continue on. We passed the feed station for the Flat 100 in the village - the second of 2 days unusually because of the cancellation last year and increased numbers this year. This may be why we were seeing so many cyclists!

The journey along to the Griff Inn was a breeze and the building looks great after the refurbishment- I’m sure I read somewhere it is due to open soon.

Along Eel Pool Road we had our second “event”. A car coming towards us and a car behind decided to overtake - with a caravan on the back! Some folk don’t know how precious life is. Somehow they missed each other - we were never in danger.

Turning left towards Mattersey we decided unanimously to take it easier - it’s a social ride and nearly always easy (ish). Then having reached Mattersey we turned to Mattersey Thorpe mainly I think as it was going to be quieter and the surface smoother. But we swept on unhindered! The journey home was a bit of a blur, We carried on chatting and distances seems to just disappear.

Diana disappeared as we turned towards Serlby making her way home, leaving three of us to continue. The hill leading up to the industrial outskirts of Harworth split us up. Christina headed off up front with me and then Mick behind. A little voice behind was encouraging me so I battled on only to find the little voice wasn’t a blue rider at all and we’d left Mick adrift. A quick go slow brought us together and from there we continued as a group back to Tickhill.

One of the better rides this, for the company and because we all seem to be of a similar mind. Looking forward to next Sunday when the weather will be fine. Forget the wellies but pile on the sun cream. 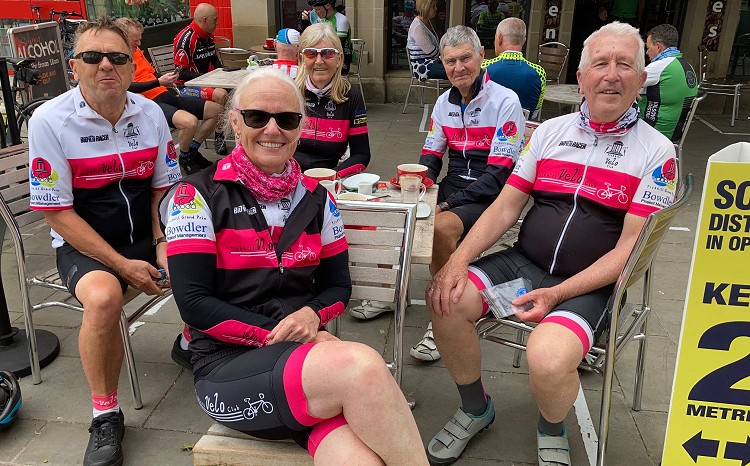 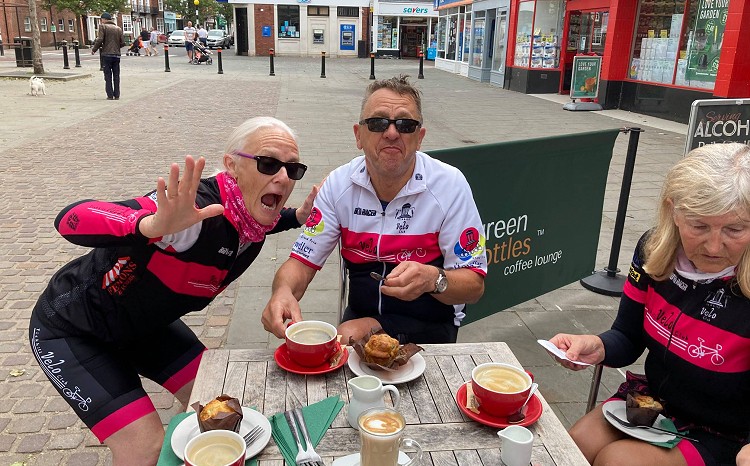