It was a cool morning (round about 10 degrees C) but fine and it saw us collecting in predictably small numbers in the CC car park. We were 6, so legal, and prepared to leave as the Red group sorted themselves into 2, less than 6, groups.

We headed east with no wind to aid or hinder us and headed towards Stripe Road crossroads turning towards Harworth and through the industrial estate to Serlby. Kevin kindly wore his high vis yellow jersey and stayed at the back making it easy to keep track of the group. Traffic was light so we were able to enjoy the morning without needing to single out too often or scream “car up/down”. Once past Scrooby Top and Ranskill we had the open road but kept to blue-ride-pace or thereabouts whilst enjoying the clear views of landscape in autumnal colours. Cycling straight into Mattersey but avoiding the speed bumps we turned into Job Lane and then right towards Sutton.

The road to Sutton is one of two long straight stretches, on the way we were going, to Retford but with no wind it was easy pedalling. On a couple of occasions we needed to slow down till we were all together again but the pace seemed about right for the group as a whole. Sutton came and went.

When we reached the main Bawtry/Retford road traffic slowed us a little and we could see the red lights on the railway barriers ahead. So we dawdled along but despite that we still had quite a wait for the train to pass and the barrier to rise. On reaching the main worksop/Retford road we did stop, traffic was heavier and faster so we singled out and made our way to the roundabout at the end of Ordsall Road and turned right. Fully expecting at least one of the group to have been caught out by the traffic we pulled to the side. No need we were still together!

We continued along keeping an eye out for planes which might be going in or out of the airfield. The only plane we saw looked as though it was heading for finningley rather than Gamston. But I digress!

The route took us left, eventually, and left again to Eaton and then back in on the busier road into Retford. You know sometimes that the idiot in the car who has just decided to overtake a few yards before the traffic island is going to think (or not) “must avoid that”. Fortunately I guessed right and as he pulled left to kiss the kerb I stopped! He travelled on probably thinking “phew only just missed that” and I live to cycle again next week!

Once into Retford we headed for the square and 10 Green Bottles. We sent Diana in to ask if we could go inside as a group - well she’s the most aggressive - and after some time she came out unbruised and said Ok we can go in! A bit of thought went into how we sat, but Tom had one 2-seat Sofa, I had another and we shared a coffee table. The others shared a second table and we had very acceptable drinks and snacks.

Back outside and ready for off, we realised a group photo was advisable. Selfey style of course.

So I set the timer, lined everybody up and pressed the big button. I ended up with 9 photos and Tom is not on any of them. And its not because he was so thin he was behind the lamp post -although he probably is./was. is there a good Self school around!

We headed off across the short pedestrian area and back to the ring road and then on towards Clarborough and Hayton. it felt cooler down to 8 degrees). A little voice at the back asked if we were going up Strawberry Hill so someone had recognised where we might end up. But I ignored her! And in any case I now know hills are not the problem they once were.

It was returning to being a bit like a closed road circuit with traffic back to light or missing as we made our way towards Clayworth and then Drakeholes. Drakeholes seemed popular, with cars parked out on the canal side of the road and there were even a few long boats to gaze at as we passed by.

Eel Pool lane was wind free and easy going and s we turned left we then opted to go via Mattersey Thorpe along the resurfaced road. Reaching the railway bridge at Ranskill we parted company with Tom and Kevin. Tom to go directly back to Firbeck and Kevin to accompany him and get some more miles on the clock. He was in no rush as he had set the slow cooker on for lunch/dinner. My Grandkids who live in the midlands get confused about lunch and dinner - I’m pretty sure they have lunch at dinner time! and according to my sister who lives in Devon she has Supper at dinner time! Thank goodness I’m normal.

So four of us continued by turning right along Folly Nook and right again towards Scrooby Top.

Diana and Paul went straight on and Del and I turned left towards Serlby. Del spotted some superb ploughing along the way and nipped through a gate with a big hedge at either side and I continued slowly until he eventually caught up. From there till Tickhill it was a fairly easy ride back. Del went straight on and I turned to the Cricket club. Since there was no one there to chat to I went home!

See you all and more hopefully next weekend, and thanks for the company. 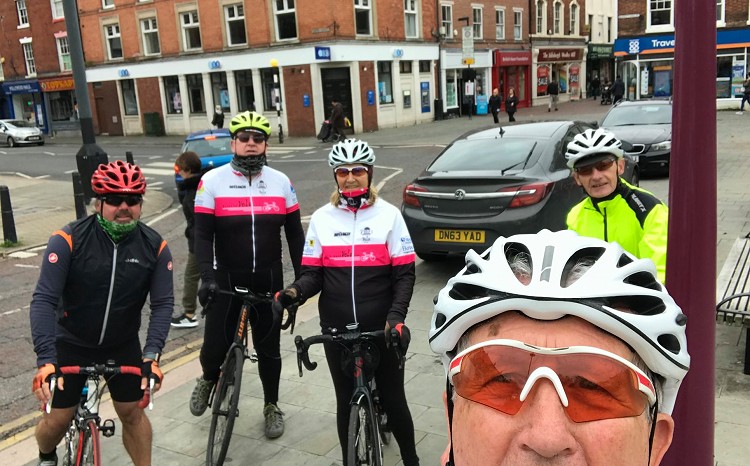