We were five, nearly six but John H had decided to take the red ride route and John C thought he could keep up with the red ride so both left us. Secretly we knew they were better off there anyway!

So we were Denise Motley, Diana Simpson, Mick Lee, Peter Hanks and me, Martin Crapper leading from the rear. The weather was warm but looked overcast enough to rain - it didn’t. We set off towards Bawtry passing Frank White on the way and a little while later found him making us up to six. And it was probably about six miles before he left us.

We headed out past Bawtry into Austerfield, Newington and on to Misson.

The breeze was light and to the side or behind and helped us on our way and we had no thoughts of the effect on the return leg. This was turning out to be a pleasant and uneventful journey. We all kept together (blue speak for going slow) and chatted amiably away.

We were through Westwoodside, Haxey (waving at Nick Kay’s house) and on to Low Burnham and Epworth. From there we went up and over the hill to Belton and did another ‘Peter’s shortcut’ to avoid the main road ending up almost before we realised at the Happy Café.

We sat outside and were served quickly. There was a bit of aerial entertainment but Mick contributed a significant gem as usual !

“Has anyone got a Tattoo?” You could carve the embarrassment but there was only one confession, and we had to quickly insist that we didn’t want/dare to see it. My constitution can only take so much.

Once we reminded Mick to put his helmet on we were off again and heading into the breeze on Idle Bank. Somewhere along the road the breeze became wind and the open roads leading into and through Wroot were more difficult.

To avoid the long and winding road from Finningley to Austerfield we went along to Blaxton past Walkers Nursery and through the airport maze. Pete had left us to go home and when we got to Austerfield Diana also left us.  In single file we wandered back to the cricket club. An enjoyable ride but a shame so many potential cyclist didn’t join us! 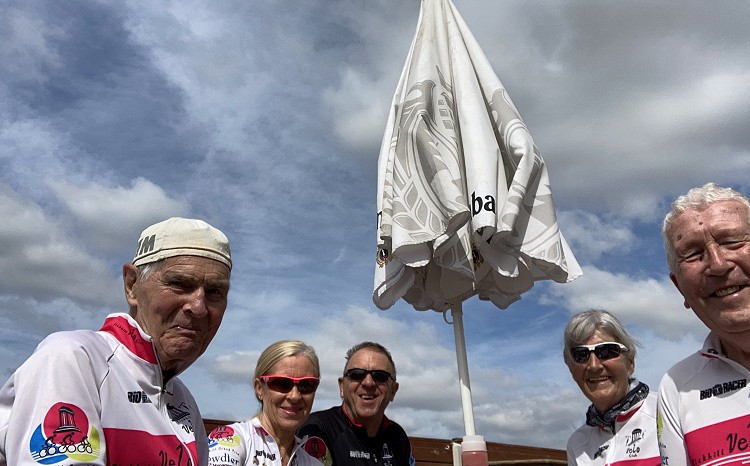