The forecast was not good but the weather was making us potentially happy cyclists as we queued in the Cricket Club car park waiting for the signal to go. I admit to having listened to the forecast and as a result turning up in cold weather gear.

Despite huge numbers of Red riders the first team (blue ride) were few in numbers and were: Mick Lee, Peter Hanks and me Martin Crapper. But we were to be four for our coffee stop!

We set off heading for Bawtry and finding traffic pretty heavy made our way up the hill towards our first enforced pause - at the 3-way traffic lights at the new housing estate. I don’t go spying up there often but I’ve yet to see workers and especially that rare breed of working workers. I opted for the safe route at the wrong side of the cones once lights turned green and since I had forgotten to change my broken rear view mirror I can only guess what the others did!

Traffic vanished momentarily as we got to Bawtry and we just kept going to the left at the Crown Hotel and right towards Auckley. We chatted about “men” things as you do and turned right towards Misson, past the Ship Inn and on into the wilderness. I think its fair to say that it was turning into a good day.

There was little if any wind and we made good progress through Misson, Misson Springs and on to the B1396 - Bank End Road. We rode single file along this section and made a democratic variation to the planned route turning right onto Idle Bank and then Left onto Tindale Bank Road.

Pete our source of stacks of information told us that going straight on gets you to a distant dead end and that going the way we were was dead straight for 3 miles. Oh and only adds a bit to plan A. On the other good side there was no traffic.

Mick used to come fishing as a lad round here but we didn’t let him get too far into that story as there were too many other distractions (apparently).

At the A161 we turned left and before we knew where we were we reached Graizelound turned right and were at the café stop. There were other cyclists there that I am ashamed to say we didn’t know - well it turned out they were from Tickhill ! We did the advertising thing and who knows we may see them at the Cricket club one Sunday. Mind you they were out of our league they had the “Terminator” breakfast. Basically its served on a plate the size of a small bed and filled with meaty stuff you carnivores eat together with half a dozen eggs hash browns , sausages, chips (probably under the mash) and still managed to look fit when they left!

We masked up and ordered inside then went back out onto the deck to bask in the sun and wait for drinks and snacks to arrive. Said snacks arrived minutes before Diana Simpson arrived. She had been a “maybe” on the web site and must have followed us from Idle Bank Road. We reluctantly left her after a respectable period and set off back to the A161. At the junction we said goodbye to Pete who went on to Owston Ferry to add a few more miles on before getting home to Westwoodside.

Mick was being brave and continued to let me lead the way - well we were two abreast but you know what I mean. Turning left in Haxey and down the long hill (Tower Hill) took us down to Mill Lane where we turned right - I had forgotten that Mill Lane is a hill and going up it you could be forgiven for thinking “is he lost?”. But once up at the top its another nice downward slope for confidence to return. We waved to Pete’s house as we passed the pond and continued along Upperthorpe Road and Cove Road eventually turning right on Idle bank and then left Onto Thorn Bank towards Wroot. Wroot is about ¾ to a mile of houses stacked up at both sides of the road and manages to look an attractive proposition for those with a will to live in the area.

Sorry I get carried away ( I know, not soon enough). The roads get fancy names here - we were cycling along Candy Bank, Nan Sampson Bank and the boring Wroot road all within a couple of miles.

Thos couple of miles brought us to Bank End Road where we crossed over towards Finningley and then continued along the A614 into Bawtry. Old age was catching us up - not Mick, just me - but we continued without slowing or resting and again in Bawtry - no traffic. We turned left and right without pause! Fortunately those red lights were waiting for us and we had to stop but we didn’t need the rest, honest!

I felt so good I went back to the cricket club to make sure Mick found his car and the went home for a shower. A good ride but we could do with some company. So if you are out there with bike and need motivation we are it! 9am next and every Sunday with a choice of rides and it hardly ever rains on our parade. 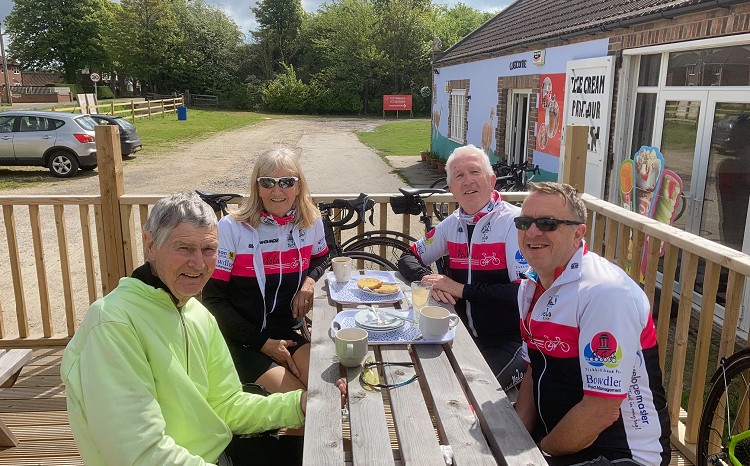