All week the forecasts were iffy but Saturday’s edition gave us hope for a dry day. The cricket club car park seemed full of cyclists with lots of chatting, so much that I thought we were never going to get off. The blue ride was enormous by recent standards — three new members (sorry Frank but you were number three as I’d never seen you before!) and all welcome.

The plan had been to stop in Owston Ferry at the Crooked Billet but breaking the habit of a lifetime I did a pre ride recce and found it wasn’t suitable! So same route, different snack stop!

We were off eventually heading east towards Bawtry, having reassured Diana that there was only one steepish hill. And after a little reminder from behind about average speeds we settled into a comfortable rhythm — about a hundred yards behind Frank! Traffic was light to medium at high speed though it look to be one of those days. We made it into Bawtry and arrived at the junction to find no traffic, for once the lights were in our favour. So we turned left then right towards Austerfield. Lots of banter and Frank was somehow at the back — must have happened at one of the Bawtry turnings!

As we made our way towards Finningley the roads were quieter so the conversation filled in the gaps. And we were speculating on the possibility of a dry ride. The clouds were not threatening and the breeze was light; what could be better (or go wrong)?

We turned right at the bend in Finningley and headed along Wroot Road. Frank decided to head home along Bank Head Road (via Misson) not wanting to spend too long on his bike! There was a positive from this — we were down to an even number so no Billy No Mates on the blue ride.

We chatted our way along more or less empty roads into Wroot, passing the Wroot annual fair. There has been a caravan on that field since the start of the pandemic. I passed this way a few days earlier and the guy was cutting the grass but today he was no more and had taken his caravan with him!

Karen and Brian were joining in so we were a happy bunch all the way to Idle Bank when just around the corner “CLUNK”. In a car you just turn the radio up and ignore it but keen spotter that he is/was Brian stopped to pick Karen’s pump up — or a bit thereof. He stuffed it in a pocket and we set off turning right towards Epworth and Swan City - somehow still called Wroot Road. The bridge is where the now famous Diana spots the swans, but today they let her down — probably another effect of July 19th freedom day!

Brian regaled us with a tale of a failed swan kidnapping whilst he was at work. He spotted one off the side of his oil rig - 100 miles east of Dundee. If you feed them you can’t get rid of them — just compare them with seagulls!

So into Epworth we went and more or less straight through the middle and out past the Old Vicarage heading towards Owston Ferry. So far I hadn’t heard a “Are we there yet” or “Can I have and ice cream” so we seemed to be doing OK. And this part of the ride although uneven (technical word for “a bit hilly”) was quite easy going and we made good time. At Owston Ferry we turned left them immediately right along flat roads into Graiselound. Amazingly the café (Shepherds Place) seating was empty although there were quite a few cars — presumably delivering kids to the play area. We went into order and things didn’t go quite to plan.

Diana ordered her drink and a toasted tea cake and I could see the backroom staff (!) getting one (TT) out of a cupboard so I shouted “make that two” and two more of our group added to the total. Diana paid and I queued up to add coffee to my order and to pay but I waited and waited. Eventually I asked what the delay was and was told that the lady out back had gone to see if more were available. I didn’t realise that going to see if more were available meant a trot up the track to another building. Eventually I said I would have toast and butter rather than delay any more so I paid and went outside. Karen and Christina came out to the seats shortly after and followed by Brian.

My coffee and toast came! Coffee was acceptable toast was less than 1 soggy and covered in grade 2 lube I think. Tasted probably between edible and duck food. The others ate well and Christina took pity on me and traded half her toasted tea cake for my the last piece of my oil and polystyrene offering. It all kept the conversation — interesting. And I will go there again!

We set off again heading west towards Westwoodside, noticing the wind growing but still OK. We rode into Westwoodside and went straight over the runabout and then left onto Commonside where we waved at Pete’s house and continued round the pond before turning left on Park Lane. There weren’t any hotels there so we didn’t have to Pay!

Right at the end took us back onto the main road and passed Idle bank where Peter thought he might leave us to do a loop before going home; but he didn’t, he continued with us. As we reached Springs Road and prepared to turn left Pete said his goodbyes and went on his plan B loop.

Karen has a friend in Misson but we didn’t get invited for coffee and carried on throughout to Austerfield where Diana left us. And we were down to 4. A good ride so far!

I made it through the junction in Bawtry and onto the Tickhill road, but could hear what I thought was abuse being aimed at those behind so I pulled in when I could and waited. It wasn’t abuse it was advice of the welcome kind. The chap was shouting “that roads blocked” or similar words to that effect. We are cyclists after all so ignored him and made it as far as the lay-by before two cyclists coming the other way stopped us to say they had been turned back. There had to be an alternative! Especially as a police car approached and parked threateningly across the road.

So we went back into Bawtry and turned right heading south and then turning right on the Blyth road. Assuming Karen would go straight along to Blyth (and home) we pulled into a lay-by to say goodbye, but she decided to come with us further. Somewhere up Wrights Hill Karen realised she had a naff pump and didn’t want to risk the longer journey from Tickhill home so tired at the roundabouts and went straight back. Hopefully she made it in one piece.

That left three of us to return to Tickhill . As we were chatting before going our separate ways the fast half of the red ride appeared together with Don. Greetings form TVC Don!

Don is only slightly older than you might think but set us a quiz. A cycling quiz. He has been a fan of cycling for ever. The first question was “who one the first ever tour of Britain” I assume that was you daughter giggling behind you. I was only six and wasn’t allowed a bike, my fiends didn’t have one either. But Don knew the answer, he even knew how the winner broke away (and I can’t remember the winners name) and the route beyond Glasgow. There were two more questions before we gave up. If you need to know, Don’s your man.

Hope to see you all next week although I know a few have already offered medical exemptions! 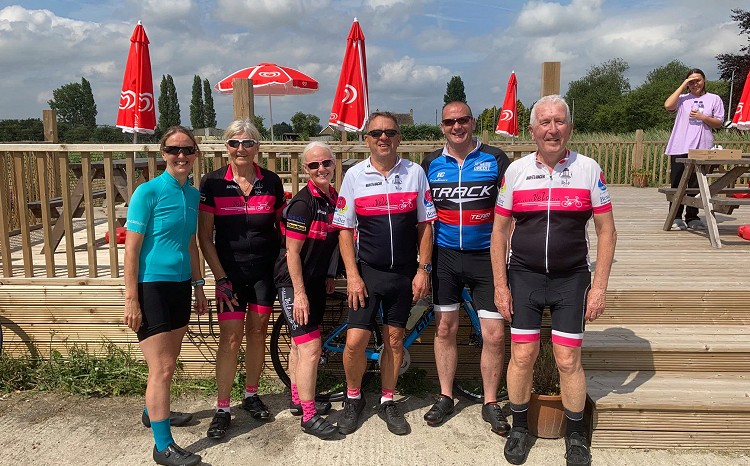