Good weather forecast and no red ride do we had a big group including Mick Cleghorn, Mick Lee, Mick Abiss, Martin Crapper, Diana Simpson, Kevin Thomas, Nick Kay, John Clarke, Brian Barron and Dave Lee who didn’t volunteer to be back marker but did it well for a lot of the ride. We had hoped for a new face to join us but that didn’t happen which was a shame but there is always next week Mr X.

The planned route (which amazingly we kept on right to the end) included a short first half and a longer second half. Oh and a new café stop.

We were obviously fresh and made good progress out on the Bawtry Road and then along Stripe Road into Rossington. A lot of the conversation seemed to include snippets about when the little breeze we had was going to be behind us - I got that wrong!

From Rossington we went along past GoOutdoors and with a right and left, hindered by the traffic lights, we were on our way into Auckley. A little break enabled us to regroup before the first roundabout although having stopped it seemed unnecessary - 10 riders in single file seen through a 25mm diameter bar end mirror can be misleading!

Altogether we were off again straight through to the cross roads. To shouts of “is it left here” and “which way” we went right along past Walkers nursery up to the roundabout and then left. Few knew that we were actually passing Lady Di of Blaxton’s palace so there wasn’t a lot of excitement. And I also admit to being a bit worried that we were going to arrive at the coffee stop before the staff!

We had done the outward leg of the TVC TT a few weeks ago so the return leg gave potential entrants (that is a hint) an idea of how easy it will be!

Temporary traffic lights right outside the door didn’t worry us, we were in and parking the bikes just as the manager(?) told us they weren’t open yet. But they would serve us - when the water was hot enough. The restaurant in the posh building has a coffee machine which heats up slower than the machine in the burger kiosk - stay alert this could be important. It was warm in the courtyard and we sat around gossiping and waiting - apart from those who decided on an ice cream while we waited.

I got my scone from the restaurant and a latte from the burger kiosk. I was quite happy, but Diana and Kevin who looked as though they might self harm got their scones with a wooden sword rather one like my razor sharp Sheffield steel knife.

We set off again, and it felt a bit cooler, through Hatfield Woodhouse and turned right twice at the Green Tree (tree now long since deceased) and headed along towards Sandtoft. The wind was now noticeable and more or less against us making the road seem longer than it is. Our pace had dropped a little by the time we reached the 5 lane end roundabout.

And then we turned directly to the wind for the next 11,709 metres with not a bend in sight! Sounds much longer in foreign units!

The wind seemed stronger as well. The group went ahead and Mick (L) and I kept up the rear. Diana left us first to go check out the swans ( yes, swans) and John in the middle left us a bit further on to go home through Wroot whilst the others waited for us at the end of the road. Nick had gone straight ahead to add a few miles to his ride and we all turned right along Sandersons Bank at an easier pace.

Mick C left us and went straight ahead for (his) home and we all turned left towards Misson.

We passed through Misson, Newington and into Bawtry where Mick L left us to go directly home leaving just four of us to head on to Tickhill. The weather had improved and when we reached the Cricket Club it looked as though it would remain rain free until we’ll after we all made it home.

Thanks everyone I enjoyed the ride. 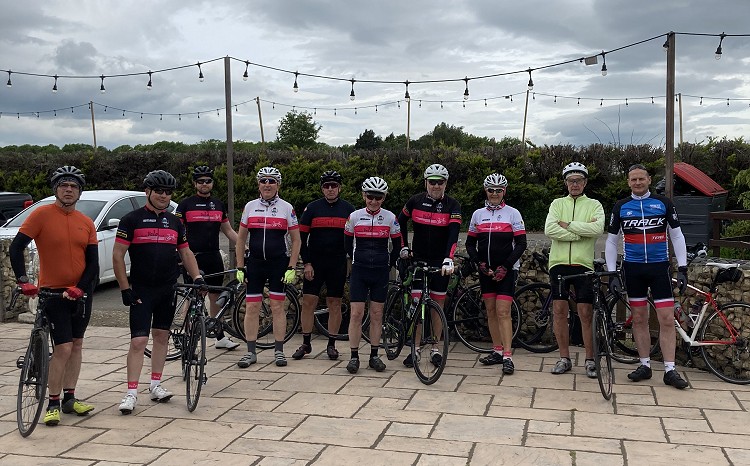