It was a nice bright morning, chilly admittedly but we were not going to let that dampen our spirits. We past our time in the warm changing room while 9am came and we could set off - except no-one seemed to want to. Eventually we three leapt into action and headed east in single file.

Our route took us along Stripe Road to Rossington, on towards Auckley and then around the airport and onto Blaxton. Most of this in single file - new Highway Code or not we were aware of the traffic wizzing past. Once through Blaxton and taking the left turn towards Wroot we were able to abandon single file and chat. It had been a quiet ride thus far! Apart from the noise of the rubbing of Mick’s rear tyre on the mudguard we were missing something - something I dare not refer to by name!

We were through Wroot and on Idle Bank when for reasons I can’t remember now, we stopped.

No I wasn’t lost, merely refreshing my mind by looking at the map (on the phone). There was a text message from Christina asking what time we would be at the café as she would meet us and ride back with us. Having replied we continued and arrived at the café right on time.

We were let into the shed and parked up next to the only other bike and went into the café expecting to find - you know who. But it wasn’t her it was Diana - and just as welcome.

We drank our coffees and ate our cakes - Brian had Ecclefechan probably because he had been practicing the pronunciation since his (Scottish) birth! Millionaire’s shortbread did it for me, Diana, of course, had a toasted tea cake.

Riders on the return ditto plus Diana Simpson.

We set off back and that missing “thing” had reappeared. We chatted away with a very welcome back wind until we almost reached Wroot again. Brian hit a pothole and won a puncture!

We found a grassy gate entrance in the sun and let him swap the tubes. Advice and minimum help were offered and accepted before we were able to continue.

We hadn’t intended to return the same way we went but no way were we not having that following wind. The return was much easier and faster than the way out.

Once we got to Finningley Diana left us to go home leaving the three of us to continue. Mick peeled off in Bawtry and headed home and a short while later Brian left to go into Harworth. Leaving me to make my own way home, which I did without getting lost!

It had been a small group and a good ride but there’s plenty of room on the roads for more of you to join us. Next week? 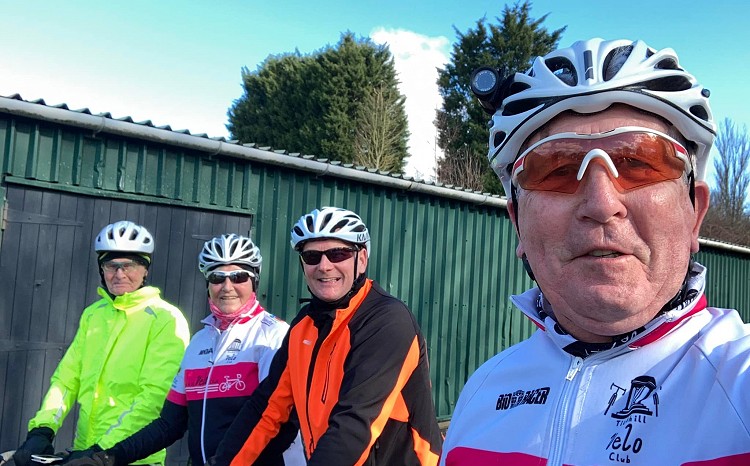