Blue Ride to The Lemon Tree

If you keep up to date on facebook you will know that we arrived at the cricket club leaderless and with nowhere to go! Ollie had volunteered to help out - he does that! Paul turned up having not expected to be available and suddenly Blue ride had a leader a back marker and a glimmer of hope. There were red riders there as well but thats the only mention they get as they coalesced wordlessly (it seemed) into a pack and set off.

We apparently settled on Epworth as a destination and since Paul had a plan he went up front! The route was to be reasonably direct in a roundabout kind of way - out east along the Bawtry road and up the hill in a tidy set of twos but a pace not usually seen by the blues. I seemed to be hovering about 17mph and enjoying myself. First ride of the year and not struggling - can’t last!

Whilst two riders made a speedy exit at the tee junction the rest politely waited for the oncoming traffic and we regrouped on the hoof as we approached the overhead railway bridge heading towards Austerfield. The weather was good to Ok with little wind and reasonably warm. We headed into Finningley and turned right onto Wroot Road. With little traffic to hinder us we crossed the B1396 Bank End Road  along to Candy Bank and into Wroot. Who made these names up? No don’t bother I don’t need to know! Despite shouts of turn left in Wroot we continued straight along Field Lane turning left on Idle Bank before turning right to Epworth Turbary - made famous in another Paul Bacon event and quiz. The only place we got a bit spit up was within sight of the café when the last pair had to wait for traffic.

Its a nice secure park for cycles inside one of the storage units, locked once we were in and opened up again later. I saw no sight of the donkeys despite all the adverts and the guy who opened up said that looking after donkeys was why he was there - was he trying tom tell us something?

We had the choice of tables and moved them together so we all sat around together. Coffee and scones were not just good they were cheap and we took our time over them. A couple of photos were taken and we set off again but with instructions to stay in pairs and together as the road home was likely to be busy and that would be the safest grouping. We wound up to that 17mph again (not sure how I managed that but I know the other eleven were Ok. We waved to Pete Wilby who was going the other way and hopefully recovering enough to join us again before long.

Through Low Burnham and turned right towards Haxey and then westwoodside where we waved briefly in passing the end of Pete Hanks road. But then quickly round the duck pond until we met Idle Bank again and turned left towards the old Park Drain Hotel (now long gone). Although the main road was busy we singled out and road easily turning left towards Misson. Lovely countryside and no traffic on the side roads.

We reached Misson with the sun more or less infant of us and wisely Diane shouted a warning that the road might be slippery. Completely ignoring her own advice she took to the road in spectacular fashion. Luckily no one else was involved and we took defensive positions around her although there was no other traffic to ward off fortunately, just a man in slippers who offered his help. The bike was Ok, the Castelli jacket sleeve torn, and herself was not too bad. Uncomfortable no doubt but up and active quickly with no immediate signs of injury. Riders are well known for lying about how they feel but she cycled on no doubt realising that we had slowed the pace a bit “in case”.

I checked on Tuesday and she still insists she is OK (ish)!

People disappear from time to time and some do it to return home early so we lost a few on the way back through Bawtry and into Tickhill but there were still a few to say goodbye to at the cricket club.

oops sworn to secrecy! Never mind freedom of the press and all that, friendship first!

A super day riding, thanks everybody and see you next time. Good to see Tony on his first ride  - didn’t embarrass us and hopefully we will see him again.

Oh and just as we were splitting up to go home two red riders arrived but didn’t seem to know where they had been. Probably trying not to embarrass us by mentioning how far and fast they went! 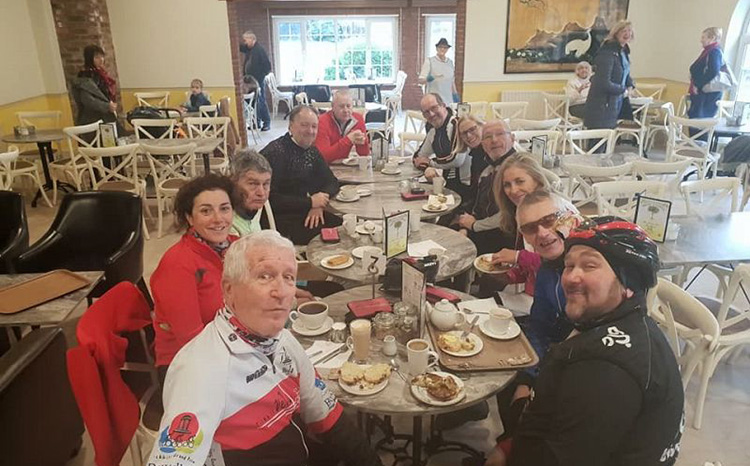