Riders: Martin Crapper, Matthew Lowe, Mick Lee, Brian Barron, Pete Hanks, Brian Barron and John Clarke (with ideas above his station - well I Think it was him who signed in as Bernard Hinoult)

A lovely winter morning with the temperature in double figures and forecast looking better. We set off for a little wander round the village before heading up Apy Hill Lane. Another surprise was that there was very little breeze. It increased a bit later but for now pretty good for the time of year. I don’t remember the dogs barking as we past the cottages just before the open countryside - getting better all the while!

We followed what has been a frequent route recently along the various turns into Braithwell and then on towards Micklebring. With Brian and Karen in front shouted instructions were issued as appropriate and they at least followed the “right” and “left” ones! Matt suggested we take the Back Lane out of Micklebring and then left on the main road to avoid the hills and take advantage of the nice down hill section before turning left towards the Hellaby Industrial estate. This was to be a welcome part of the day (the suggestions not the down hill).

As we reached the main road traffic was not to heavy so we kept to the road rather than the footpath as we turned right and then left onto Cumell Lane and the road to Carr. We don’t often do Bib Lane and I did worry but a worry shared ….. So having explained about my brakes not really working I went down Bib Lane at slightly less than snails pace. That was a first - being waited for at the bottom of a hill! I had had the brakes looked at twice and they do slow the bike down but don’t stop me in a hurry.

From the bottom we headed towards Laughton Common, skirting it rather than passing through by joining the Mineral Line (part of the TPT) thereby swapping traffic for minor tree routes, dog walkers and wet leaves. But a nice section of the day (thanks again Matt) and a path I didn’t know existed. And it took us quickly all the way to the industrial estate in Dinnington just a short distance from the Café stop.

Having secured the bikes we easily fitted into the corner table and gave our orders to the young lady whose job it was. Drinks came quite quickly food came quite slowly - sorry that should be very slowly. We had been there almost an hour before food arrived. And mine was a scone! Did they go to Tesco for it? It was enjoyable though we were able to chat and seeing the sunshine was a first for me at this café - almost unrecognisable.

After the traditional group photo which took a while as Mick seems to struggle with his bike lock. But we got that out of the way and turned left out of the gate and then left again towards North Anston. This return leg was noticeable for the increasing amount of time Matt took the front! No complaints from me he knows the roads. paths and byways better than most (all) of the people I know. Any way we went left up Quarry Hill, a short sharp shock to those who were not expecting it and made our way along to Woodsets.

Mick decided he was not going to leave us and go home but would return to Tickhill to get a good few miles in for the day. As well as dodgy brakes I had a dead Garmin so I had no idea how far we had gone. The route was generally as planned so I could guess!

Its a more or less straight run into Woodsets where we turned left towards Gildingwells Road. One noticeable thing about the day general was the lack of traffic. Just short sections seems busy but on the whole we were on our own!

We went through Gildingwells not without noticing but without hindrance and the same with Letwell we were quickly through to Lamb Lane ant turning right. For a while I hadn’t noticed but John was sticking to the back, probably because he was without mudguards, and Brian didn’t have them either but didn’t seem to care. It hadn’t been wet enough one the road to cause any real problems. They probably both were going to head for the washing machines anyway.

The long free wheel down Kidd Lane was enjoyable. the recent resurfacing makes it an easy ride and we regrouped at the bottom before heading east through Firbeck towards Tickhill.

Ey-up you lot, Mick’s got lost! No he said he was going that way. So Mick went into the clear blue sky towards Oldcotes and we went well ——

We went up Thornbury Hill and we got a little strung out and this became exaggerated as we went over the rutted downhill side. Regrouping again at the A60 junction Matt again suggested a diversion, and one we often take, along Blythgate Lane - a gentle but long rise before the rapid decent along the main road into the village.

Turning left at the lay-by we went up the little rise of Stoney lane and along Pinfold Lane, New Road, St Marys Road and zig-zagging through to Common Lane, Airedale and Alderson Drive back to the cricket club. Quite a group at the end. as opposed to just one or two!

Great ride, great to see old faces - sorry you faces. and hopefully we will see you all again. As always new faces welcome, nobody gets left behind, not even me - well except going down Bib Lane!

PS will somebody tag me on Strava I need the miles. 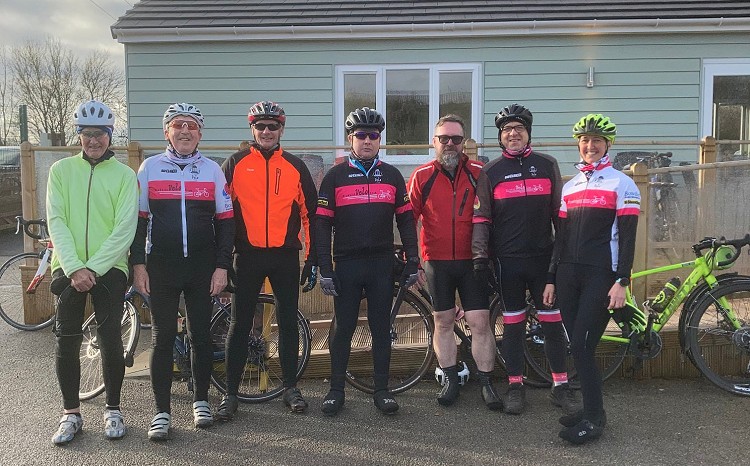