Another lovely sunny morning, perhaps summer is actually here after all, as we gathered for this morning’s ride. The plan was to head to Markham Grange but after a few close calls on the busy roads round Armthorpe an alternative route out had been selected. On the theme of alternatives Adrian had scoped out a new café on a ride yesterday at Barnbugh Lake Fisheries who welcomed cyclists so it was a done deal.

A quick catch up with the returning 7:00 riders, a couple of who were joining us for the first hour or so of our ride, before we headed out of Tickhill and up Apy lane into a bit of a head wind which could be telling after a few miles. Some major pot holes in Apy lane to negotiate but there were no issues as we continued climbing into Braithwell. Through Braithwell, Micklebring and on into Ravenfield with no problems other than exchanging a few words with passing motorist who objected to us riding two abreast as it was delaying him getting to church on time, mmm.

At the lights in Ravenfield the 8 became 7 as Nigel turn left to head for home leaving the rest of us to descend into Old Ravenfield. Bit of a hiccup when the first couple of riders missed the left turn on to Thrybergh Lane but a quick whistle brought them back. A smooth roller coaster ride down into Thrybergh but when riders over shot another junction it was time for a team talk about how staying behind the ride leader might be a good idea on new routes.

In a nice peloton we now continued towards Kilnhurst on a route normally used for visiting Wentworth, but we turn right up Denaby Lane to head for Old Denaby which is a nice sleepy village in contrast to Denaby Main which isn’t. Turning left then right we continued on another quiet road which steepened into a cheeky little climb where joined the usual Markham Grange route out side High Melton. Here the 7 became 6 as Gary turned for home leaving the rest of us to climb towards Marr. Adrian pointed out the café was less than a mile away if we’d turned left but that would have been too easy. The next 5 ½ miles were on familiar roads passing so close to Markham Grange we could smell the coffee. Here the 6 became 5 as Eddie peeled off for some more punishment in the hills but we were on a mission and turned to navigate through Brodsworth, Hickleton and Barnburgh on some lovely quiet roads.

Pulling into Barnburgh Fishing Lakes we were greeted by a picture of sunny tranquillity with fisher men being watched from a patio area by people enjoying brunch in the open air. Service was swift and the food was good as we discussed the merits of wet vs dry lube and Stephen educated us on the finer points of match fishing and the component parts of carp poles. Food consumed, and water bottles filled the verdict was that this would be a TVC regular stop.

Turning right out of the café there was a small matter of a 1-mile climb into High Melton on café legs which was a test but it was only a hill and we got over it. Cadeby was the next village to tick off before descending into Sprotborough fall and preparing for the climb out the other side.  As this was a ride of change we avoided the climb through Edlington and cut through to Broomhouse Lane and headed into Wadworth via Tofield lane which finishes with a steep little climb. We were now in Wadworth where 5 became 4 as rode past Adrian’s house leaving the ever-decreasing peloton to head back to Tickhill. At the top of Wilsic Lane the 4 became 2 as Stephen and Jonathan continued onto Braithwell and Maltby leaving Lawrence and Martin to descend into Tickhill and complete what turned out to be a rather enjoyable ride. 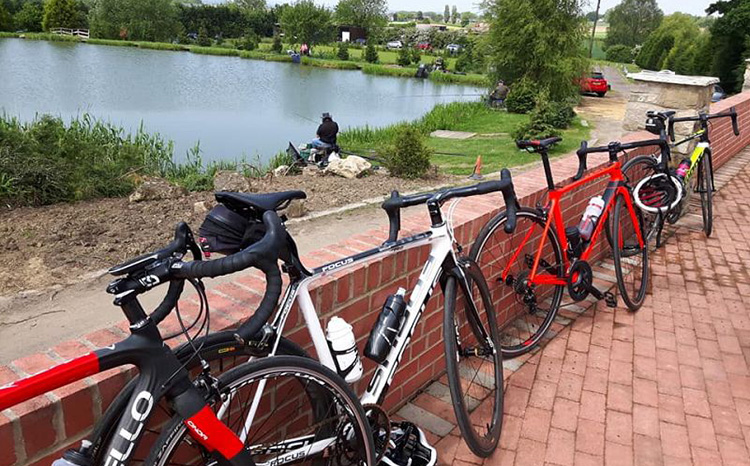