After 3 failed attempts, one of which ended after an ambulance had been called! it was fourth time lucky as we met at Tickhill Cricket club for another expedition out over the Humber bridge and into the East Riding Yorkshire. The glorious weather we have enjoyed over the summer was set to continue with promised blue skies, sunshine and only a hint of wind.

Following the accident on a previous attempt (get well soon Rob) the morning started with a safety briefing on the perils of half wheeling and ensuring bottles were securely in cages as losing a bottle into the peloton can have serious consequences. Fully briefed it was time to get the show on the road so with Martin B (me) on the front and Mick “the hoover” in position as back marker we rode out of Tickhill and safely passed the scene of previous weeks accident.  14 riders were in the group but this dropped to 13 as Rob had only planned to meet for a brief chat before peeling off to Harworth so a reduced peloton dropped in to Bawtry in 2x2 formation and following a check that Mick was in place we pushed on to Misson. We’d had a report that the Misson road might be closed but in reality we found there was a nice man with a traffic control lollipop stopping the traffic to wave us through, lovely.

The straight roads in and out of Misson were negotiated with no incidents and we were making good time and keeping good formation as we turned left to head for a loop round Wroot.  The Wroot route is nice being on quiet roads through a quiet village in the sunshine as on we pressed through Epworth and onto Beltoft eventually picking up the Trent shortly afterwards.

Turning left we headed down river to the crossing at Gunness  where we were 2 hours into the ride and averaging a steady 15mph in the sun. At this point certain members were asking about the potential for a comfort break but this was at least 3- 4 Martin miles away so bushes might have to be visited before long.

On this side of the river the roads are a little more unfamiliar but we knew there was a climb out of Flixborough which as predicted required a regroup at the top for the tail enders being marshalled by Mick but the A ride kicked in and there was no one at the top! Not to worry I was in the B ride and I had the route so they wouldn’t get far! The hill behind us it was only a short hop to the next junction where turned left to head into Normanby country park for a comfort break in the old dog kennels. 5 minutes to take some selfies and we were back on the road.

More unfamiliar North Lincolnshire roads but we knew enough to know that there was another hill after Theady but we like hills so despite a bit of grumbling, panting and near coronary from Brendon who decided to climb in his big ring it was behind us. Left turn on to the “A” roads to North and South Ferriby and our first sighting of bridge but it was still 8 real miles away with the café stop planned before we crossed over.

The last climb before the café out of Ferriby was another grumbling lung buster for us tail enders  but we did regrouped this time so we were in a nice tight peloton when I, yes me, the one who’d given the safety talk on bottle management dropped my water bottle while trying to put it away! Fortunately for the group it bounced high, narrowly missing Micks head, but had been run over by a car before John M could retrieve it. My favourite bottle as well ☹ good job the club are having a sale at the moment. In no time at all it was time for a descent of Gravel Pit lane to the banks of the Humber estuary and the Old Tile Works for a café stop.

First time for most of here and it won’t be the last, can recommend to anyone in the area for good food, reasonable prices and modern surroundings. Tried sweet talking a club discount but was advised we could have had one if we’d phoned in advance, note for next year.

During the refuelling the usual topics of conversation came up along with the merits of sticky water bottles to reduce the risk of dropping for some reason, can’t think why. All the time we were eating we were in the shadow of the Humber Bridge towering above us, an impressive sight that we obviously need a team photo in front of and before long it was time to get back out on the road.

A couple of minutes from the café and we were climbing onto the bridge footpath passing a British Heart Foundation gazebo. Crossing the bridge is always an experience dodging pedestrians while trying to admire the views but this time it was compounded by a charity event, hence the gazebo, so progress was reduced to a standstill at points due to the shear number of people. Although no Strava medals were won we got across the bridge eventually and expecting to catch up on some lost time we dropped into the car park only to find a massive market! No option than to dismount and walk although John M did pick up a 5000 piece jigsaw of the bridge and some Edinburgh Woollen Mill gloves, ok I may have lied about the jig saw but he was tempted.

Back on the road the sun was still shining as we started navigating the little lanes through the picturesque villages of Swanland, Melton and a circuit of a chocolate box church in Welton in the warming sunshine. Left out of Welton there was a bit of a climb to a view point where we took a few minutes for a chat to some other riders before carrying on our way. Descending into Elloughton there was a little navigational blip as we turned right instead of left but as I pointed out a good Ride Leader realises an error before we’ve gone too far wrong.

Leaving the Caves we had a 9-mile section on busier roads through Gilberdyke to Howden which is just a head down slog until we pulled into Howden Garden Centre for a toilet stop, a top up of water bottles and an ice cream.

We were getting back on familiar territory now as we crossed back over the Ouse via the Boothferry bridge and back onto quieter country roads through Rawcliffe where the call of home must have got too strong for some and an “A” ride split a head of the pack, This is fine on familiar roads or if one of the A riders knows the route but a right turn was missed needing John M to chase the errant group down and bring them back. Sykehouse is another lovely little village but energy levels were beginning to get low at this point and the temperature and slight head wind were beginning to tell their toll so a decision was taken to change the route into Tickhill and avoid the busy Armthorpe road.

So the return route was plotted through Stainforth and Hatfield but it became apparent that a couple of riders were seriously low on water and energy so Tickhill Velo did what we do best and pooled what we had to make sure everyone had water, energy gels, Haribo and lots of encouragement then after five minutes we set off again with the A riders taking the front to protect us B riders from the wind. It was touch & go in some places and there were a couple of unscheduled stops but all riders made it back to Tickhill and no support vehicles were called in!

Another epic three figure club ride folks, thanks for the company and team support when it was needed.

Brendon – Epic come back ride after recovering from injury.

Everyone - for making it another great TVC day in the saddle. 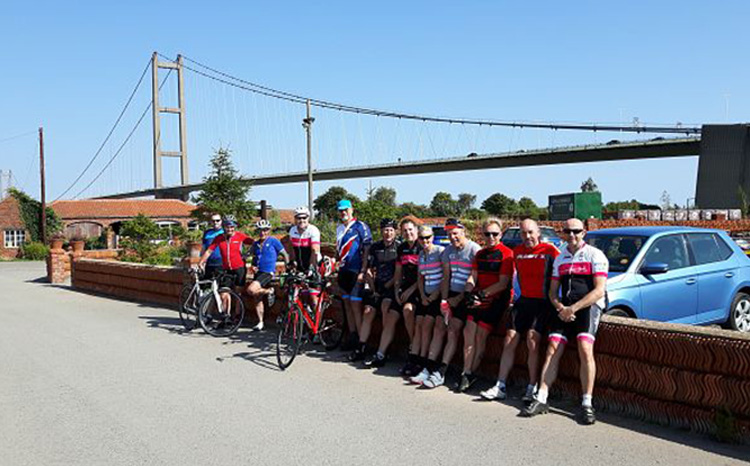