There was a strange smell around the Cricket club this morning as 16 riders assembled for a ride out to Sherwood forest, sun tan cream! Yet another beautiful sunny morning, becoming the norm these days, need to bottle the feeling for the dark winter mornings but enough pessimism it was time to get the show on the road.

16 riders, the largest 9.00 field for a while so we had a brief safety chat about splitting into two groups, leaving an over taking gap and with Mick identified as the back marker we rolled out onto Sunderland Street.

The first few miles were taken up organising the groups and discussing the warm weather and battling up Malpass hill, the latter taking the most time. Right on to Technotube lane for some pothole dodging before descending into Firbeck to shatter the tranquil Sunday morning calm. The traffic gods were kind to us as we passed through Gildingwells, Letwell and Woodsetts but the heat took its toll splitting the group as we climbed from Woodsetts to North Anston.

The descent from North to South Anston was as exhilarating as always and we passed through South Anston to the sound of Church bells and lawn mowers. Martin Bowdler and Catherine pulled away leaving South Anston and needed chasing down to warn them about the lefthander over the level crossing but it wasn’t really necessary as Martin split from the group here to head home after having completing the 7.00 ride earlier.

Crossing the railway and Chesterfield canal it was granny gears all round for the climb up Packman Lane which seemed to be a little bit longer and steeper in the heat, well it did to me and my post-holiday legs. On quiet country lanes we made our way past Bondhay Golf course and after crossing the busy A619 safely headed into Clowne. We had minor incident with a motorcyclist who came a little too far over on our side of the road to have a look at us but other than that we rolled through Clowne without incident.

The route here took a left turn to Elmton and the majority of the riders made it but unfortunately a small party had been held up at some traffic lights and didn’t see the turn. We noticed they were missing at Elmton and dispatched Adrian to go back and look for them suspecting a puncture, but he returned having not found them! While we were debating what to do the group appeared on the horizon lead by Pete who navigated them back on route after missing the turn.

Reunited the group continued on quiet roads skirting round Whaley we rolled through sun dappled woods on roads that were just made for cycling. Only one minor incident of note when a young lady in a mini came around a corner a little too fast but again nothing to write home about. Nether Langwith is a nice place to cycle through with a village pub, The Jug & Glass on a village green with a babbling brook but it was shut so we had to press on to the Café.

Exiting Nether Langwith the Sunday tranquillity was punctuated by shotguns, but it was an organised shoot rather than a bank job so on we pressed as fuel levels were running low and there were still a few miles to the café. More sun dappled lanes saw us rolling into Church Warsop and after everyone in the group took time to wave at a little boy & his dad we rolled back out into open countryside. We split into two groups again with a decent overtaking space but still had another close shave with someone who was clearly late for church and couldn’t possibly wait a few seconds before overtaking, grrrr.

With the roundabouts of Budby safely negotiated it wasn’t long before we were rolling into the Sherwood Forest visitor centre for some well-earned refreshments.  Although it was surprisingly quiet for a sunny Sunday we still caused a bit of a queue and it seemed like the right thing to do to let a young lady and her family with hot food go in front of us before her food went cold. Steve did comment that he had hot beans on his toast and perhaps he should go to the front as well but it fell on deaf ears. Mr Greig was so perturbed he dropped his helmet in his beans! You couldn’t make it up. After cleaning his helmet, that bean juice gets everywhere, the rest of the café stop was pretty straight forward apart from the shock as Mick unzipped his cycling top to expose the pink, yes pink, not magenta, pink lining! Gary was so shocked he had to leave early and missed the obligatory team photo taken by a random passer-by before we rolled back out for the return leg.

A decision was taken that we’d avoid Clumber Park and take the direct route back into Worksop and again naturally split into an A & B ride as the roller coaster road separated the group. The ride through Worksop was a start / stop affair with the traffic lights and the ride into Carlton involved a game of Russian roulette with a tractor but other than that was about it as we headed for home.

Approaching the Coop in Carlton was my cue to turn left for home leaving the rest of the peloton to negotiate Langold and Oldcotes on their way back to Tickhill. This routine return journey very nearly went bad when Andy had a close near miss with two tractors we should all take note of. While descending Malpass hill at nearly 30mph Andy came upon a tractor and trailer apparently parked, he pulled out to overtake but was surprised by another tractor turning right out of Blyth Gate lane to head up Malpass! Very nearly losing control on the road Andy managed to “bail” onto the grass verge narrowly avoiding injury.

Apart from Andy’s near miss, another great club ride with good company on mostly quiet roads in fantastic weather, thanks to all involved. Let’s see what next Sunday brings. 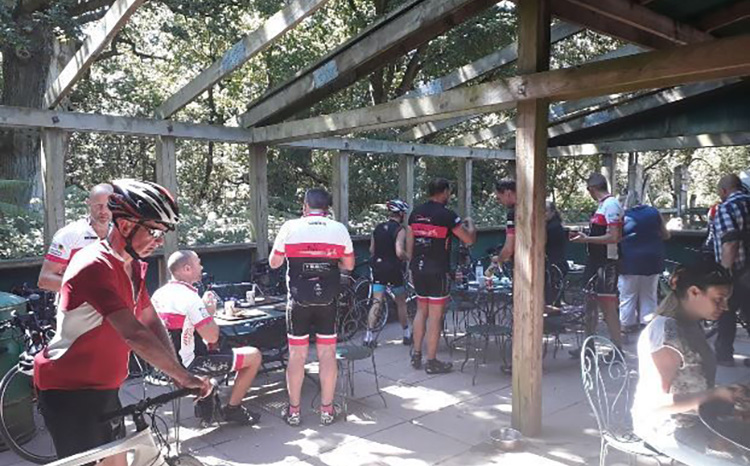