We met as usual in the Cricket Club car park and, with plenty of riders to choose from, we 6 left the others, Red riders to a man, and huddled with social distancing to sign in and discuss routes. Two were proposed and the Yorkshire majority chose the cheaper but longer option. Doing a recce earlier in the week Christine reported dramatic price increases at Leger Lakes now under new ownership according to Mick.

So a nice flat ride to Askern was on the cards (or not)! We took a route through Rossington to show Paul we knew where he lived! I guess he might have joined us there had he known where we were going.

I’d prepared a route called “Askern Lake” and planned to use it on the Garmin. We’ve been there a few times so guess who picked the wrong saved route. I knew we were ok though because at every corner it said go back! What I had completely misjudged was the amount of cars we were to meet. We went largely in single file through or passed - Hayfield Green, Auckley, Branton and Armthorpe. The roads were rubbish but we had light winds and a suspicion it would be behind us on the way home.

Once we left Edenthorpe and Barnby Dun traffic eased and stopped being an issue. We crossed the canal and river turning right alongside what used to be a power station with quiet roads and were able to really appreciate the countryside. Paul advised that we should turn through Thorpe in Balby to take advantage of better roads. Once we reached the A19, options were discussed and we crossed over to go through Sutton and avoid the busy road.

Looking for a change we turned into the park area and over the wooden bridge but were greeted by a row of old men in deckchairs hands in laps and smiles on their faces. The weekly model yacht races were on! The café was open and a table free outside so we parked up and joined the short queue to order. The actual ordering was chaotic but once we had paid the speed of service was impressive. No scones but what came was enjoyable and went down smoothly.

A nice flat ride out with more (hills) to come! But before that we needed to inspect my rear tyre which seemed to be worn through to the fabric and more importantly split. Im an optimist so ignored the obvious and set off with fingers crossed, There was a spare tube in my pocket but tubeless should be worry-less. We returned over the bridge and towards Burghwallis making good time. But it was about now that the other 5 realised that there were hills this way! Too late now.

The roads were quiet and we made good progress through the village and on to Skellow. There was an old chap (even older than me) at the foot of the bridge well wrapped up , bike leaning on the bridge side, complaining about the heat. We pushed or carried bikes over and regrouped at the other side before setting off agin towards Hampole and the suspicion of hills slight rises. The old house at the junction with the main Wakefield Road still tries to look medieval and derelict.

Along to Hooton Pagnal before reaching the crossroads at Hickleton which being as busy as ever caused a slight delay but we made it safely.

There was some downhills too and we stopped at the bottom (nearly) at the grassy triangle in Barnburgh for a group photo. As you will see Christina was on her knees by this time and ready for her Nana Nap. Going down the hill there was a reminder that the time Mick and I came this way he was out front and we never saw him again that day, so we overtook him to show the right route.

We were a bit strung out going up the hill to High Melton but it gave us another excuse to have a break and have a leisurely drink in a convenient gateway. I could hear mumblings about Sprotborough falls and the hair pin bends but democracy only goes so far. And when we got there no one seemed to find it too difficult. We di take another break where the houses start too appear - I think that locals call it Warmsworth but a very short distance away my daughter lives in Balby - Its a status thing I guess.

We crossed the main road and on towards Edlington but turned left towards Broomhouse Lane and left Christina to go west towards Maltby and home. The rest of us went east and then right along Springwell Lane. I did tell them the main road was a gentler rise but we opted for the steeper version up Tofield Lane - just to get the pulse moving I thought. We came back through Wilsic and the backpay into Tickhill having had an enjoyable but tiring ride.

See you all on Sunday again I hope. 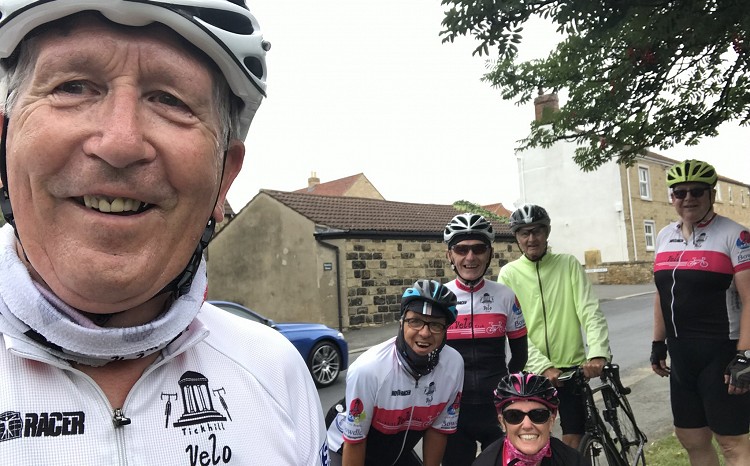