The cricket was in full swing when we met at the cricket club, several of the riders were still half asleep and dreaming of the books they fell asleep reading the night before. They signed in with the name of the character they most associated themselves with as you will see.

Wheras I slept a dreamless sleep!

I suppose there should be prizes for spotting who was who from the photo, but there won’t be.

Maybe I missed a bit at this point! I don’t remember the pre-ride intro or the careless careful division of the group into two manageable hoards. But somehow I was up and pedalling with the first group out of the gates and turning left (?) Left? we never go left! Did Matthew know what he was doing as we wandered the back streets of Tickhill?

Mangham Lane was more familiar territory and we turned right on St Mary’s Road and again onto Wilsic Road. The sun was out with very little breeze and looking like a brilliant day for a ride. What could go wrong?  What do you mean Matthew? Turning right towards Wadworth? This must have been a detour perhaps. Into Wadworth and we turned left onto Wadworth Hall Lane where I used to work. They obviously didn’t want me back the as all gates were closed and padlocked! I was going to enjoy the freewheel down the escarpment although it was a bit potholed and gravelled. We made it safely down and turned left onto White Cross Lane. There were even more potholes here and plenty of warning shouts and wavy armed demonstrating all to no avail. I went down a hole looking a lot like a quarry (the hole not me) and had to stop to check I still had a circular rear wheel. Fortunately I had! The others rode on and I could see them waiting at the entrance to a bungalow. Not so, Nick had shared the same pothole but come off worse with a puncture. Not easy watching a guy with a bad back and blue surgical gloves replacing a tube.

The house owner came out to see if we were OK or needed anything. Lots of banter both ways but we now know he doesn’t serve lager!

At this point some confidence was restored in Matts ability to follow a pre-determined route as Paul and team b came along, offered to help but once the offer was declined they kept onwards. Looking pretty sharp they were too. A nice compact group, smiley and masses of TVC kit on show.

At the end of Springwell Lane we took the left along Broomhouse lane and then right onto Lords Head Lane and another right to get to the traffic lights to get us across the A630 and on and downwards to Sprotbrough Falls. I think we all expected to go up the hill but no, we turned left and up the gentle slope of Nursery Lane and then right towards the centre of Sprotbrough, north over Melton Road and into Spring Lane. It had been a long time since I went along these roads although it was on foot then whilst still studying. Sorry, getting carried away!

We continued north on a fairly compact group chatting happily and wondering what was next. No need for the peloton to know anything other than the final destination (especially if they/I don’t listen.

Not so much traffic out on these roads and very little as we took a left turn onto Green Lane. There was a bit of a downward slope and two of our number decided to go ballistic, with Matt following at a more reasonable pace. With his arm out and a confident “Right here” i felt confident in turning right. All on my own though! A quick about turn got me back on track remembering to follow my leader rather than doing as I was told. The route took as past the turn off for Brodsworth Park, Through Brodsworth meandering along Butt Lane until we reached Bilham Lane were we regrouped (or rested) before turning left and left again still on Bilham Lane. We could feel the heat of course but enjoying rather than suffering it. The countryside made it all enjoyable.

We turned right onto red Hill Lane and came to the A635 junction, the most difficult part of the ride. The very nice lady in the car behind us waited patiently whilst we found gaps in the traffic to let us through and then had to follow a while until she could see she could pass us safely.

Hickleton road winds its way down (yes down) to Banrburgh where those of us desperate for a sprint did so. They waited / we re-grouped at the little island at the junction with Doncaster Road and we all appreciated Matts explanation of where the café was. Might have missed it anyway but Matt was infant of me!

The other part of the ride were already enjoying the sunshine and food. The view over the lakes is good, superb if you are a fisher person.

Great Café, Good coffee and scone (and cake, eggs Benedict, Sausage sandwiches etc) (not all for me), and a good place to take a break. Better surroundings some places we have stopped at and enjoyed.

There came a time to pay of course and the route out was up hill for quite a way. Doncaster Road hosts Ludwell Hill which saw us more spread out but somewhere along there we regrouped before turning right into Cadeby Lane. It became apparent when we reached Cadeby or just a bit beyond that we were going to be spread out and it wasn’t until The turning for Nursery Lane that we regrouped once more. We were spread out again by the time we rounded the hare-pin bend going up from the falls and with the traffic (not a lot, but enough) we had to wait in a driveway in Warmsworth.

More discussion on the route (and some from the other group caught us up) and Rob indicated that he would head for home and not follow us on the last part of the ride. We were to travel more or less straight through Edlington to 5-lane end. Not sure who  knew that it was a gentle up hill all the way but there was a lot of puffing and panting!

The route took us left along School Walk and left again onto Back Lane and Wood Lane before the bend into Rajkes Lane which rises veers gently upwards. Once we crossed the B6094 and turned left onto Crookhill lane we were on the middle part of the “intervals” route which some probably knew well. Turning right onto Tickhill Back Lane we were all confident of the way back and came into Tickhill via Pinfold Lane and round past Estfeld school to the cricket field.

A good session, great company and a good coffee stop Thanks guys 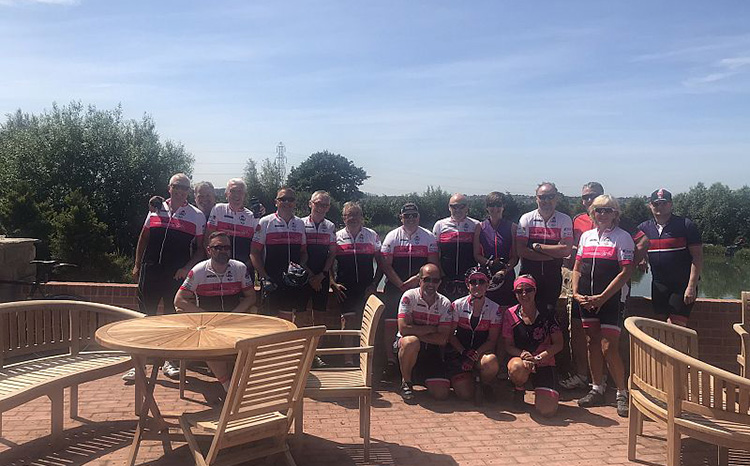