I know you were in the London Marathon or maybe you were on a park run but you missed a good ride today. We didn’t all miss out of course those that didn’t were: Matt Lowe (ride leader), Kevin Thomas, Pete Hanks, Christina Cooper, Ian who became John Huggins, and was the ghost throughout, together with Nick Kay for entertainment value. Oh and almost forgot me, Martin Crapper.

Roadworks continue on Sunderland Street and the workforce were in good voice according to those who got shouted at for riding past the “No Through Road” signs. We were not going that way and turned left out of the Cricket Club entrance and wandered along to Common Lane, Doncaster Road, Mangham Lane etc before reaching Apy Hill Lane.

At this point John who was still Ian (to me) indicated that the sun was affecting him badly and he might have to leave us. I didn’t say but for me it’s the full moon which causes the problem.

I can’t remember where but I can remember the name of the young lady who pointed out that Ian was John and from then on we were OK! I had to the remember to get him in a photo so I could start to be nice to him and hope he hadn’t noticed the name change.

Any road up, we were on Apy Hill Lane, bright sunshine, dry underfoot (tyre) and happy to be there. We began to make a better pace with John bringing up the rear, out to Braithwell and Micklebring where we turned onto Back Lane which with hindsight was a cop out. Back Lane saves all the ups and downs on the main road and for a lumpy ride - well we needed to keep the figures low!

We went right at the end and second left past the tip and into Bramley where we regrouped at the junction with the dual carriage way. It also gave Matt time to explain the next bit of the route!
We’d all done it before but it never hurts to have a reminder. Across at the lights and back up the dual carriageway using the bus lane of course and then left on Goose Lane with a bit of a squiggle onto Morthen Road before turning left onto what at first glance was an insignificant suburban road but lead through to Green Lane and back onto Morthen Road.

Throughout the ride we did a fair bit of going slow and the odd stop to regroup but that didn’t stop us enjoying the scenery, the company, the day generally. No expressed regrets that we were not plodding up The Mall with 39,999 others! We were enjoying a nice easy paced ride, I don’t think I had heard Matt mention Bib Lane yet.

Form Morthen Road having crossed the motorway we turned onto Brampton Road and through Brampton. With a bit more jiggling we approached Brookhouse and that name - Bib Lane got another mention. “You can go up it or go round it” was quickly replaced with “just take it easy, you’ll be fine” as we waited at the bottom.

John had to leave us at this point to cover his other responsibilities so I quickly turned round to take a snap before he vanished into the ether.

Nobody wants to be that person who opts out at the foot of a little slope, and we lost sight of Kevin as he flashed up the hill on a mission. I followed with “feel free to pass me at any time” and we all went up. Miraculously only Christina passed me - the others were queuing up behind being polite.

We took a rest at the little traffic island at the road end. Now at this point I was thinking where’s the coffee although not out loud. No one else raised the subject so we carried on with rumours that coffee at Leger Lakes was now pretty expensive. I must get a second opinion sometime!

We went left through Carr to Hooton Levitt and then doubled back to Slade Hooton. We were beginning to look as though we might be heading back but Matt had more in store for us! We went along Abbey Road and on to the main Maltby Oldcotes road but when we reached Stone we turned right along Kingswood Lane. It starts off being a bit hilly but you have to trust your ride leader (OK this doesn’t apply to me if I ever get to lead again).

Matt with Pete were “in front” that’s loosely true, Kevin had seen the hill and done his thing leaving the way behind, and they stopped, indicating that we should have a chat. Now at this point it gets a bit hairy - I have a long life ahead of me as long as I keep Stum. Some of us (!) thought the hill continued up and didn’t want to stop so continued. We continued along the dead flat road to a point where we thought “we have to go back in case Matt gets lost” or thoughts in no way connected with that thought. Back tracking we refund our ride leader and shamefully dropped in behind. Where’s Kevin?

A few minutes later Kevin had also had those thoughts and we met him also coming back! We stopped for a chat at the road junction - not a safe place to be which Matt explained was why he had stopped where he did. So two lessons to learn 1) never get in front of the ride leader and 2) Matt knows best - well he does roads all day at work.

We continued into Firbeck and back up Kidd Lane which surprisingly didn’t affect us like hills usually do. There was no panic we just went up! From the top we went directly, and at high speed, along (down) to Oldcotes, turning right to miss the lights and then left to ... to Manor farm Café.

We found a nice table in the sunshine, ordered and ate our snacks and chatted generally about life and the universe. Having a group photo seemed the right thing to do, we were all happy and in one piece. And so we set off again towards Styrrup. This part of the journey was uneventful even for Nick. We trundled along and almost made it back into Yorkshire when there was a loud bang, coupled with muted cursing.

Nick needed a proper mention and breaking his chain on a slight incline was the way to do it! We need to get him off the road but to do that he had to release the chain tightly wedged “down there”. I remember from my caravanning days, if you don’t know how to fix “it” at least have the tools and someone will turn up to do it for you. Well I had the chain tool and Pete had the quick link and it began to look as though Nick didn’t have to walk back on his own after all. And since Haxey is a good dozen miles away that must have been a relief. But knowing what we know the chain could fail again! Pete ace to the rescue again and once we were back in Tickhill where the road was closed we diverted into the garden centre.

I have drunk too much coffee already and didn’t want more but that wasn’t why we were there. Pete had driven in and parked up in the car park. So Pete and Nick loaded their bikes in the back and were away. This probably ruined Nicks target mileage for the day but he did turn his Wahoo off before they left.

The road repair was more or less complete, but still closed, and we were late back. No worries though, It had been a good day out, Thanks Matt and thanks Nick for a half hours, entertainment. 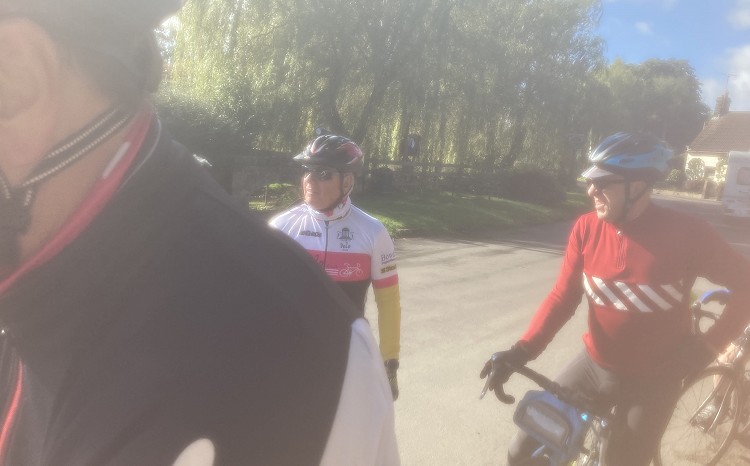 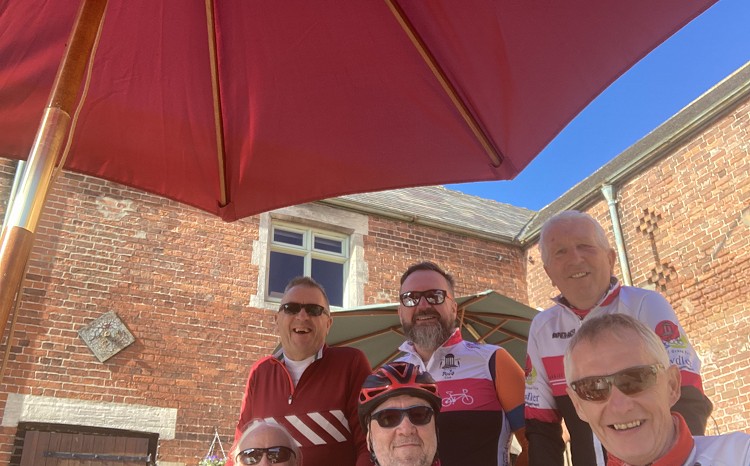