Ride Leaders: Pete Down, Jenny Down

As April progresses, the days get longer, and things get warmer but there was still ice on the car windscreen on Sunday morning but that didn’t deter some hardy souls turning up at the Cricket Club in shorts!

The majority opted for a more sensible layered approach on the assumption that by mid-morning things would have warmed up. 15 riders turned up for the Red ride planned and led by Pete & Jenny Down, including Del who had made the jump from Blue to Red. Deciding to split into two smaller groups on the road the faster group lead by Pete headed out while the rest of us waited to be part of Jenny’s comfort bubble.

After a suitable period, we set off but I don’t think Jenny had received the memo on comfort bubbles as we headed out of Tickhill at a steady 19 mph! Hopefully this wouldn’t last and indeed normal service had been restored by the time we got to Harworth. Taking a right turn here we started on Pete & Jenny’s route which had been billed as “familiar roads but from an unfamiliar direction”. Harworth turned into Styrrup which turned into Oldcotes where we turned left towards Blyth.

The traffic was kind to us, the lights on Blyth bridge weren’t and held us up a little, not that there were any Strava medals at stake, we were comfort bubbliers after all. From Blyth we took the B6045 towards Worksop which had a couple of “undulations” to warm thing up despite the flat ride billing but nothing too severe although we did pause for some onions to remove a few layers. Onwards through Worksop to the bottom of Sparken Hill, the familiar direction is down Sparken Hill where speeds in excess of 30 mph are easily obtained, the unfamiliar direction was up and speeds were considerably slower, splitting the group and requiring a regroup at the top.

The planned coffee stop in Clumber park was less than one “Jenny Mile” away now so the prospect of coffee spurred us on. Someone had commented earlier that the north entrance to Clumber had been closed but was surely reopened with the relaxation of Covid restrictions. Unfortunately, the Park Authorities hadn’t received Boris’ email and the gates were firmly locked leaving us with a decision, option A, lengthy detour or option B off road through the trees. Off roading won hands down so we weaved through the trees on expensive carbon road bikes. This wasn’t a problem as off roading for a short distance is ok provided it’s dry, Pete hadn’t read the memo on short distances though, more on that later.

Back on the road it was a short hop along some queuing cars to get into the centre of the park and the café where we found the faster bubble riders already eating & drinking. The café only accepted card payment but Jenny stepped up as Ride Leader and covered the drinks & flapjack with Pete’s credit card, thanks Pete! We stopped for a while chatting, but it became apparent that despite being sunny it wasn’t warm enough for lounging around so it was back on the bikes.

The fast bubble disappeared down the road as they do while we proceeded at a more refined pace over the refurbished bridge and turned left to follow the familiar route out of the park only to be advised by a couple of Garmins that we were off route! Pete’s route went straight on after the bridge along an unfamiliar road. Oh well this was billed as a “unfamiliar direction” ride so on we plodded until the road became a track then the track became a path! We had a quick team meeting with our Ride leader who still had faith in her husband’s route planning skills and as the path did have some kind of surface and was in reasonable conditions we pressed on. To be fair it turned out to be a pleasant ride through the forest and one we’ll probably do again so kudos to Pete for finding it.

Again, back on tarmac after our second off road excursion we passed through Bothamsall, Gamston and Eton to skirt round Retford and head past the Prison to Barnby Moor looking like a proper cycling club 2 x 2 in close formation. The return ride from Blyth through Harworth and ultimately back to Tickhill went without incident and we rolled into the Cricket club where the fast bubble were waiting for us.

We started sharing stories from the ride and when we mentioned the section after the bridge in Clumber, Pete apologised for his error and said the fast bubble had retraced their steps and taken the familiar road out of the park! Their loss, it will now officially be known as Pete’s detour next time we ride it.

All agreed that despite the unplanned off-road sections it was a good route and that Pete & Jenny should be ride leaders more often!

See you next week. 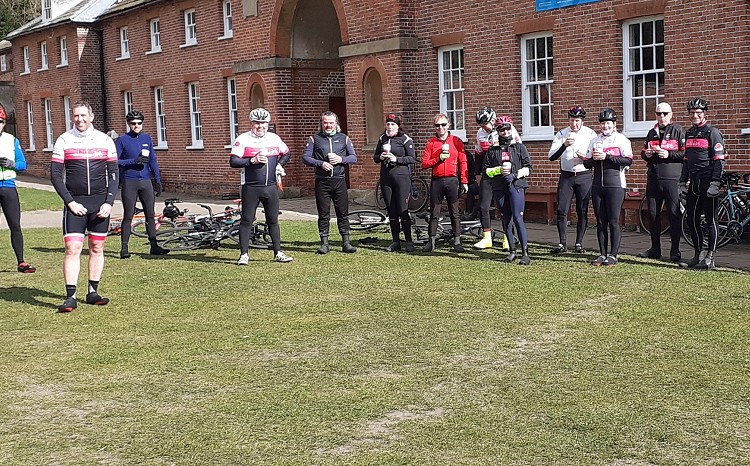