On a sunny Sunday morning, after 17 weeks of waiting, riders assembled at Tickhill Cricket Club to restart club rides after relaxation of Government Covid-19 restrictions. 14 riders turned up, 4 Blue and 10 Red so we split into 3 bubbles, 1 Blue and 2 Red.

This is the Red bubble B story. The plan was to do a 44-mile loop by passing Citrus café due to unknown outdoor seating and call for a brew at Wellingtons in Tickhill when we returned. After a quick review meeting it was concluded that the queues could be large at Wellies on a sunny day, so plans were changed to Happy Café at Sandtoft Aerodrome which was known to have a large out door seating area. We also decided that due to differing speeds and staggered starts we’d all head for the same café as we’d be arriving at different times.

So, after departure of the Blue and Red bubble A we waited 5 minutes and departed the Cricket Club and headed out of Tickhill towards Bawtry. The climb out of Tickhill was a bit of a shock to some of the lockdown legs but not all as some had racked up the miles but we were soon over the top and heading for Bawtry. There was a lot to catch up on being as we’d not seen each other for a long time but the main topic was how everyone had coped over the last few months.

While we put the world to rights on pandemics, furloughs, facemasks and the NHS the miles slipped by and before long we found ourselves in Clayworth and turning up hill to Gringley. This hill seemed to have got longer as two of the five riders increased the trailing rider social distancing which is the new normal term for being dropped! The top came eventually, and we regrouped briefly as the majority turned right while Lawrence turned left as he had a previous engagement.

Just a little effort took us over the top of Gringley before a head down descent to build up some momentum for the climb into Walkeringham. Turning left here we were introduced to our friend for the next 12 miles, a brisk head wind as we battled up the side of the Trent! Andy & Catherine did a sterling job on the front, Steve helped as well, I promised to take a turn once we turned for Beltoft! The 12 miles was a bit of a slog and the longer it went on without spotting the other group convinced me either they had taken a wrong turn, or we had and eventually, we did! The plan was to turn left in West Butterwick, but we must have been enjoying ourselves that much that we carried on under the M180 to add a couple of extra miles.

It was a relief to turn out of the wind eventually although it turned into a side wind rather than a tailwind but at least we’d get the benefit after the café. Beltoft & Belton passed by, seems to be a lot of bells round here, and before long there were aircraft warning signs meaning the aerodrome and the café couldn’t be too far away and after about 33 miles we made the final approach and taxied to a halt at the café.

The sunny weather had brought other riders out and when added to the other TVC bubbles who had arrived earlier it was a bit of a struggle to get a bike parking space but there were plenty of tables and the service was fairly swift. While we were chatting, at a distance, two more TVC riders appeared, in their own little bubble, and we were joined by Christina & Dianna who were out for an unofficial TVC ride. While our bubble finished drinks, cake, beans on toast etc. the other bubbles got ready to depart but not before the obligatory photo to commemorate the restart of club activities.

5 minutes later we were back on the road, passing the trolley bus museum and turning left on to Idle Bank road for a long straight with, at last, a tailwind! Earlier the Red A bubble had said they were heading back through Misson so we decided to take a right on the Wroot route for a return through Finningley, Austerfield and Bawtry where Andy peeled off home rather than climbing up the hill again to Tickhill.

So our 5 strong bubble that had reduced earlier to 4 was now down to 3 and my shameless drafting had to come to an end and I took a couple of (small) turns on the front. Before long we were passing Wellies and rolling into the Cricket club for a quick chat with the remains of the Blue bubble, not sure what happened to the Red A bubble, hope they hadn’t popped.

Great return to club riding helped by everyone doing their bit to keep the groups and distancing such that I think we’ll be doing it again! 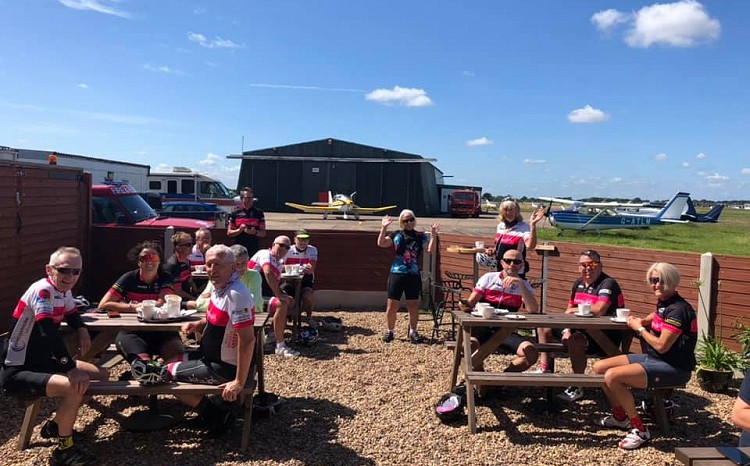