Red Ride: Citrus Café - or not

Sunday 18th April: Red Ride to Citrus Café (Or not)

Another sunny Sunday and another good turnout of red riders including Harry joining us for a try out before moving into the area. With 15 riders we once again split into a fast bubble and a comfort bubble and Harry was assigned to the fast group again led by Pete Down.

The advertised route was down to the Trent through Retford and up to the Citrus Café near Gainsborough, sounded like a good plan until we found out the café was closed, as were the others on the route. We had two options, 50 miles with no scones or change the route, the decision was quickly taken to detour into Retford where we knew we could get a drink & a bun in the sun. You could see Harry beginning to wonder what kind of serious athletes he was going to be riding with!

Pete was briefed on the route, same as last weeks’ ride in but in reverse, “no problems boss, it’s in me Garmin!” mmmm. Off they went and quickly disappeared while we set off at a far more comfortable pace. We got as far as the right turn to Harworth when who should we find but the fast bubble coming down the hill from Bawtry, Pete explained his Garmin was still logging in! Away they went again into the distance as we passed through Harworth and headed down to Blythe where we turned left at the second roundabout.

As we were heading out of Blyth towards Barnby Moor I was talking to my wingman about the fact the fast ride had a guest who must have raised an eyebrow at our club getting lost within the first mile of the ride when who should come past us but the fast bubble again! Another Garmin malfunction but Pete assured me he was dialed in now and had his eyes on the prize.

We headed through Ordsall and onto Eaton and over the river Idle where last week Adrian had told me he used to go swimming as a child. It was no surprise therefore to see two ladies in the water in the sunshine! Adrian did suggest a TVC duathlon ride and swim one Sunday morning in the summer, who knows it might turn out to be a thing, watch this space.

From Eaton there was a bit of a climb over the railway line to Upton where we ignored the usual left or right turns and descended towards Church Lanham and the Trent. At this point I found myself riding with Matt, our newest member, who was probably the only one in the club who hadn’t heard my story of Owston Ferry as a holiday destination which passed a couple of miles and Matt did a good job of pretending to be interested!

It had now been quite a while since we saw the fast bubble meaning they had either taken a completely different route to the rest of us or were up the road waiting for us to catch up and sure enough as we rolled into sleepy Church Laneham there they were waiting for the route planning meeting to get us to the café. Turn left at North Leverton, even Pete couldn’t get that wrong and backed up by an “I know the way” from Jon we were confident they’d get there. We stuck together as we skirted the banks of the Trent passing the sign warning of a deaf cat, which must now be the oldest deaf cat in the world as it’s been there for as long as I’ve been riding this route.

While there was a risk of deaf cats, I kept the pace deliberately steady, nothing to do with my lack of fitness, until Adrian appeared on my shoulder and asked “is this it? Is this the best you can do?” which I took as a suggestion that perhaps the fast bubble wanted to get back to doing what they do best, ride quickly, and off they went.

At the left turn in Leverton we said goodbye to Nick who peeled off to head for home while the rest of us settled in for the steady climb over the hill towards Retford. The hill stretched us out a bit, I held onto the Rob & Del lead-out train shamelessly drafting as they dragged me up the hill passing a couple on a tandem who I almost dropped in behind but we decided it was poor etiquette to draft a tandem on a road bike.

The descent into Retford was a chance to catch our breath before we rolled into Retford square, along with the tandem, where the fast bubble were installed at Ten Green Bottles Café. Tea, coffee, and various buns in the sun passed a few pleasant minutes during which I asked Harry what he thought about the club and got positive feedback! #LetsGoVelo. Once the drinks were done, and the compulsory social distanced photo was taken, we were back on road for the return journey through Clayworth where we tried a quick chain gang but decided we needed a bit more practice and settled back into our comfort formation.

From Clayworth we passed Mattersey and found some of the fast bubble sorting out a puncture but as they were well equipped and would probably still get back to Tickhill before us we pressed on through Serlby and Harworth to roll back into the Cricket Club to find Adrian rehydrating in the sun.

Another good ride with good company, hopefully Harry was impressed, and we will be seeing him again. 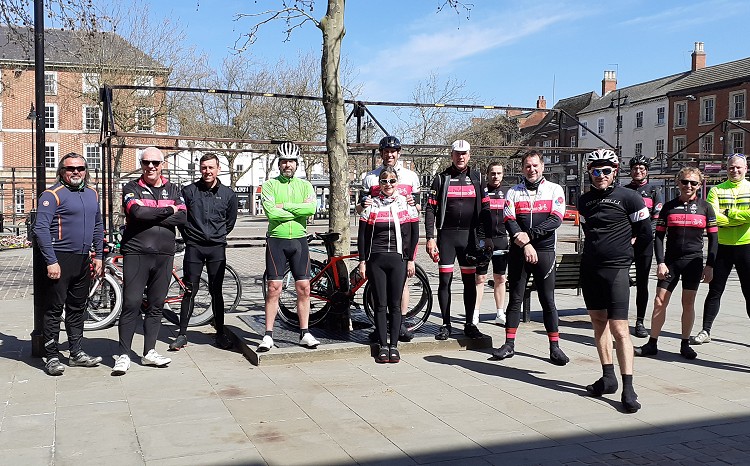