The weather forecast all week hadn’t been brilliant, but the predicted rain didn’t materialise and as it was a bit cooler than last week it looked like being a good day. We welcomed three visitors to the club, Karen, Dave and John who hopefully had a good time and will be back. Karen & Dave opted for the Blue ride, John decided to join the Red ride making our number 12 allowing us to split into a fast bubble and a comfort bubble.

The fast group Cath, Gary, Adrian & Pete disappeared up the road as they do while the rest of us continued at our normal 16 – 17 mph out of Tickhill and along familiar roads towards Serlby where we came across the fast group who had stopped to repair a puncture. They were ok so we rode through sure of the fact they would catch us up once the repairs had been completed. Our lead only lasted a few miles as we were caught and overtaken heading into Mattersey as usual while we continued at our conversational pace this being a marathon not a sprint.

After Drakeholes the planned route was to go through Wiseton and along the A57 to Gringley but the view was we’d be better to avoid the longer stretch of the A57 and stick to the usual route through Clayworth and the first climb of today’s flat route. William had done well to stick with the comfort group, but he stretched his legs on the climb and was waiting at the top looking relaxed as ever!

On the descent from Gringley we ignored the usual right turn to Walkeringham and instead headed for Misterton and a drive past The Pantry. Well, that was the plan but my Garmin, which has been known to have form, failed to highlight the right turn so the route was amended a second time to include a circuit of Misterton. Back on route we turned to begin following the 9-mile section following the Trent and as usual we had to contend with a bit of a headwind, at least this should be tailwind once we headed back to Tickhill. This section saw us passing through Owston Ferry and as this was John’s first ride with the club, he was the only one not to have heard my Owston Ferry story, he’s heard it now!

It's a bit of a drag but we arrived in West Butterwick eventually and turned left to head to Beltoft and ultimately Epworth where the fast bubble would be waiting for us at The Lemon Tree. First time for the Red Ride at The Lemon Tree and we were all impressed with the facilities, the service and one particular lady behind the counter who said we were all “looking good in lycra!” I gave her guide dog a fuss as we took our food to sit outside in the sunshine. Food was very nice, 7/10 on the scone-o-meter, lost points for poor cream to scone ratio but recovered with decorative strawberry on top.

The fast bubble had all but finished their drinks etc. but hung round for a quick photo before saddling up for the return journey and after giving them a 10-minute start we set off in hot pursuit. Heading out of Epworth on long straight roads I took a turn on the front at a steady 18mph until I was done so, thinking it was time for some chain gang practice, I pulled out for my wheel man to come through. Only problem was my wheel man was William who took the opportunity to stretch his legs again and lead us off at 20mph till we reached Idle Bank Road where a car approaching the junction thankfully created a natural regroup. Note to self; more chain gang practice required before Scarborough run.

Normal service resumed we headed along Idle Bank and turned right to Wroot after waving bye to Nick who continued home towards Haxey. After a bit of shuffling Kerry found his way to the front to lead us into Wroot where we encountered the wrath of a local for shouting “clear” at a junction and disturbing the Sunday tranquillity of the village. Leaving the red faced local behind we exited Wroot for the 3-mile section towards Blaxton which usually seems a bit of a drag. Not today though as the Kerry Wilcock’s pain train gradually raised the pace to 20+ mph clearly with aspirations of joining the Fast Bubble next week.

To be fair we were in tight formation and doing ok but, after a couple of miles at the elevated pace, I took a chairman’s decision to slow things down a little. We had a guest on the ride, and we were in excess of the advertised 16- 17 mph pace, nothing to do with my failing legs of course, just thinking of the welfare of the group! A chat with John later revealed he was fine a 20 mph, note to self; dig in and hang on to Kerry’s back wheel next time.

The rest of the ride was shaping up to be a fairly routine run through Bawtry and back to Tickhill but the traffic in Tickhill seemed heavier than usual and as we turn right to Tickhill we had a bit of an incident with a motorcyclist who passed us a little bit too closely presumably some “I’m faster than you” ego thing. A few hundred meters later it became apparent why the traffic was heavy, the A631 had been sadly closed due to an accident and the Police were turning traffic around. This meant that Barry Sheen (Google him William) was stuck in traffic heading back to Tickhill giving us an opportunity to have “chat” with him about the recommended 1.5m passing distance for cyclists as we passed him. I think he got the message that we were not happy, not sure it will make a difference, but it felt like some form of karma.

So, with our route back to Tickhill blocked we were forced to detour through Harworth for a trouble free return to Tickhill. Well that was the plan until Lawrence hit a pothole and got a snakebite puncture! I tried explaining that any mechanicals within 2 miles of Tickhill didn’t qualify for group assistance and he was on his own, but I was out voted and we stopped to help. While the repairs were being affected it was noted that the curtesy of pointing potholes and grates out seems to be getting a bit lax and needs resurrecting. Note to self: remind Members about hand signals and warnings.

So with a fully inflated tyre we set off again, surely nothing could go wrong in the last mile into Tickhill, and it didn’t so we rolled into the Cricket club for a debrief and chat about next week’s ride!

William: for sticking with the oldies in the group.

Kerry: for dragging us through Wroot to bag some Strava medals.

Mick: for back marking as usual and not being too critical on group formation.

John: for pretending to be interested in my Owston Ferry story 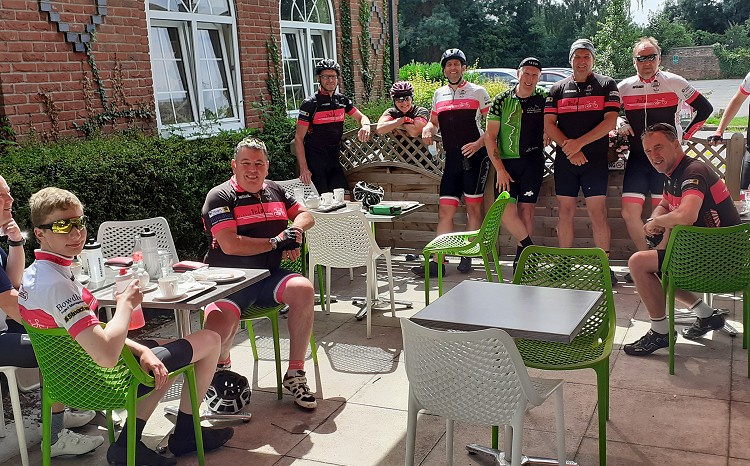 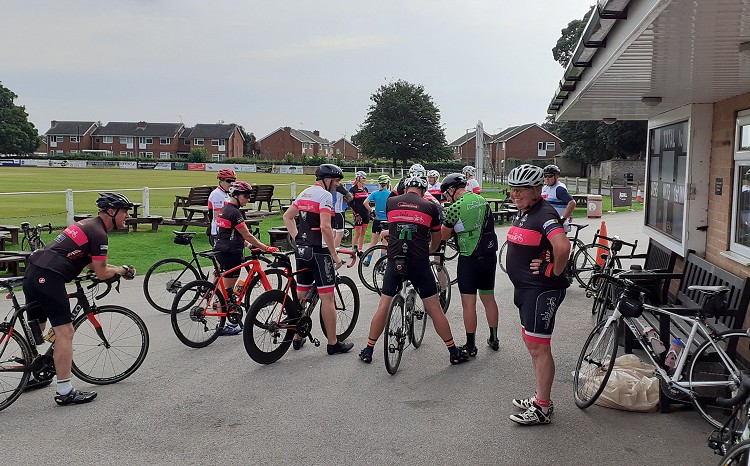