I opened the curtains this morning, on the first Sunday after lockdown was lifted, to blue skies and sunshine, scraping ice off the car was a bit of a shock but the temperature was forecast to increase so it was on with the winter kit and off to meet at the Cricket Club.

It was definitely chilly, but sunshine did have potential as 15 riders rolled into the carpark, the majority wrapped up in winter gear, a couple of brave souls in shorts. 3 Blue riders and 12 Red riders so we were within the BC allowance of 15 riders but still took the decision to split into 2 groups of 6 on the road.

The riders were offered a choice of routes, 40 flat miles with a potential café stop or 38 miles with a few hills but no café. After an extended period of inactivity, it was always going to be the flat café route so after a few safety reminders it was gloves on and we hit the road.

Left out of the Cricket club and within the first mile of the flat route we were climbing the hill out of Tickhill but at least it got the blood pumping and warmed things up a bit. Minor delay at the pop-up traffic lights then we were back underway. The roads were relatively quiet as we passed through Bawtry and onto Misson.  This was the first club ride since the 3rd lockdown was imposed on January 4th so there was lots to catch up on and there was no shortage of conversation as we put the world to rights on Covid vaccines, the furlough scheme, foreign travel and cats vs dogs as pets.

As usual when a larger than normal group of riders set off together a bubble of faster riders always pulls away. This isn’t normally a problem, provided they know the route, this time they didn’t but did wait at strategic points while the comfortable bubble caught up. From Misson we pressed on through Haxey and onto Epworth for our first potential café stop The Lemon Tree which was closed ☹ despite there being potentially £40 worth of take away orders in the carpark.

Back on the bikes and onto potential café stop #2 which wasn’t really a café stop as we knew it was closed but at least there were tables outside where we could take five minutes and consume whatever we had in our back pockets. So, 10 minutes later we were sat watching the planes land and take off while eating chocolate, flapjack and coconut macaroons washed down with, water. Oh well, roll on April 12th when cafes can reopen. While we were there Rob spent a long time in a world of his own watching the planes, perhaps thinking a Cessna 172 would be a lot quicker than sailing to France, get ready Sue!

The route home was discussed and armed with this information the Red Racing bubble, Cath, Jon, Jon and Pete soon disappeared down the road to Wroot leaving the comfort bubble to make their way home, into a bit of a head wind, at a more leisurely pace arriving back at Tickhill sometime after the racing snakes.

All agreed it had been a good reintroduction to club riding, looking forward to next week when Pete & Jenny will be ride leaders. 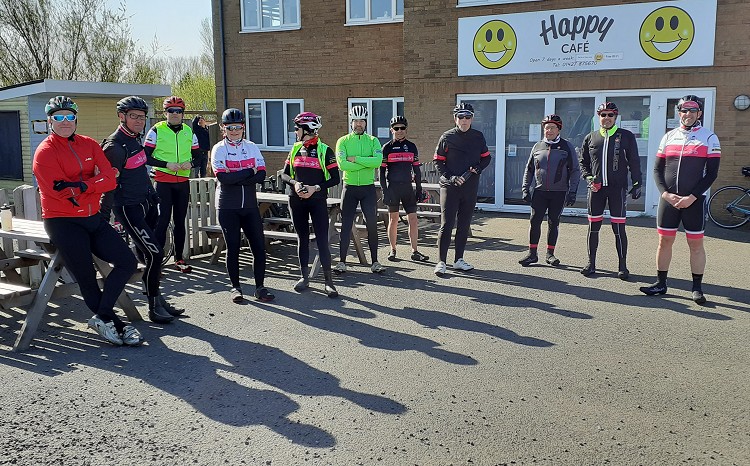 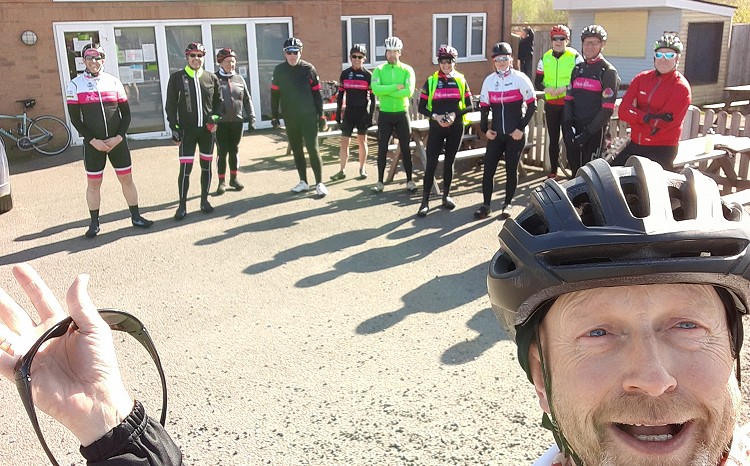