A challenging autumnal ride in some bright sunshine but brisk head winds. 6 riders set off leaving out of Tickhill up a traffic free Wilsic lane and out towards Edlington. Before we got there, we had our first casualty who turn back feeling unwell, better to be safe than sorry but it did limit my potential for drafting which could be an issue later in the head wind. The famous 5 continued through Edlington and Warmsworth to make a very careful descent od Sprotborough falls on slippery wet roads. The wet leafs were a problem but who ever decided to put a manhole on the top bend clearly was not a cyclist. Everyone made it down ok, if only Strava did medals for slowest segments there would have been some completion today!

If we were not warm by now the climb up to Sprotborough village took care of it as we headed out into open countryside heading for Cusworth Hall. Nearly had a minor incident when the ride leader, me, over cooked a sharp wet corner but again we all made it round in one piece. Passing Cusworth we swapped the rural roads for busier urban roads but it was only for a couple of miles. The lights allowed us to cross the busy Great North Road with no problems and head into Bentley where the ride leader, me, lead the famous five into another situation; The Garmin and Adrian both told me to turn right but I chose to head to the end of the road and turn right only to find it was left turn only! 80% of the group did a bit of creative riding while the remaining 20% took time to respect the law, well done Steve.

Through Arksey we retuned to rural roads and a combination of a tail wind and Adrian & Jon on the front meant the pace was a touch higher than Steve & I were comfortable with but we had the last laugh as they shot passed a left turn and had to be chased down by Dave L. After a regroup we agreed to knock a couple off and stick together, well until we hit the hills then it was time for “Out the back” Bagshaw to bring up the rear.

The left turn took us along the River Don and through Thorpe in Balne where we turned into the headwind that had been helping us up to this point and again on lovely quite roads which continued through Burghwallis until we reached Skellow where it was time to dismount and carry the bikes over the A1 footbridge. Adrian decided to ride down the stepped ramp on the other side showing good mountain bike skills, the ride leader, me, decided to try and follow but not have quite as good mountain bike skills nearly came a cropper on the turn halfway down much to the amusement of the following riders.

Back on the road again we passed Hampole and began the climb to Hooton Pagnell, into a headwind leaving the ride leader, me, questioning our choice of Sunday morning pass time. While the others waited for me at the top of the hill they debated a mutiny as Adrian had a “nicer shortcut” to the planned route back through High Melton and Sprotborough. We’ve been on Adrian’s “there’s no mud” shortcut before so it wasn’t immediately approved as we set off towards Barnburgh. Half way up the climb into High Melton the group were waiting for “Out the back” Bagshaw again which I thought was nice, turns out this was decision point for Adrian’s shortcut. Dave had already voted with his pedals and headed for home through Sprotborough leaving 4 of us at the mercy of Adrian’s alternative route.

To be fair the first part was ok apart from the number of pedestrians we encountered but I suppose we were on their territory so we couldn’t complain although one guy clearly wasn’t a cycling fan and had a “chat” to Steve on the way past, something about insurance and road tax probably. The reward for the alternative route was a ride over a windy viaduct with spectacular views over the River Don. Only short muddy distance now and we were back on proper tarmac on the outskirts of Edlington.

Adrian maintained his position at the front to guide us back to Wadworth but not before just another little shortcut in case we’d not had enough mud for one day. At Wadworth we passed Adi’s house so he was always going to bail out and at the top of Wilsic lane Steve and the ride leader, me, chose to take the road home through Maltby leaving Jon as the last man standing to head back to Tickhill. 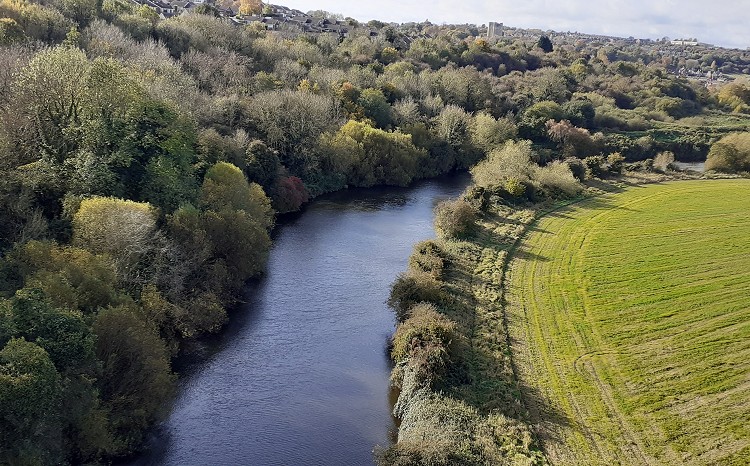 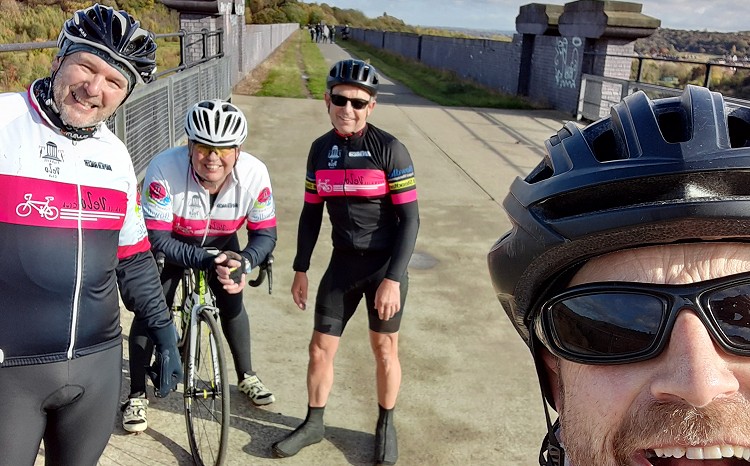