Red Ride Round and back

Lots of pre-ride doubt about the wisdom of turning up. The weather the day before produced snow which settled and the temperature was freezing. Well technically we were at three degrees but splitting hairs seems to come to mind. The view through the window at 8.10 when I emerged from below the douvet looked almost OK. So up, dressed, I stuffed breakfast down got the gear on, bike out and headed off to make sure that if anybody turned up I could either join them or send them home. But the roads were clear and when I arrived at the cricket club there were people there! On bikes!

They were all Red group riders but it would have been rude not to join them / make up numbers. And the swinger was that they were not going far. Either they didn’t notice me or they new I had a first aid kit!

We could do a short circuit call it a day and go home!

We were about to set off when the rain started! Some of us were already in rainwear (to keep the heat in) but the others quickly followed suit and we were off.

There wasn’t a lot of traffic and weren’t bothering us as we made our way to Bawtry. Wet but cheerful covers it! We could see a bright bit of sky on the horizon and puddles all over. Left at the crown hotel and then right towards Austerfield with signs of the rain easing at last.

On towards the golf course roundabout and the left back to the Great North Road and passed the end of the finningley runway. Unfortunately that is also a hill and I was maybe the only one to notice.

But then right, glancing at the Mount Pleasant Hotel before turning left towards Rossington. Didn’t really register the GoOutdoors shack but did note the mush (melting snow/ice) on the road at the far end of Littleworth Lane. We continued unhindered left at the roundabout and on towards Tickhill. We could have practiced social distancing but the first 4 were so far ahead we couldn’t shout loud enough to get them back. They waited at the Stripe road junction with the Bawtry Tickhill Road. Good end to the ride .... err NO. Let’s dip it again they said. Gary set off just before MB said let’s do it backwards.

He really meant the other way round. So we turned round and did the same roads with a different view. The sun came out. The view was not better and not worse going back except when we turned directly into the sun and couldn’t see much other than a very bright reflection off the road.

They (the front 4) very kindly waited again in Bawtry. With “the 4” In front and M&M following we made our way back to Tickhill. By the one we reached Tickhill there was no sign of the four but I assume they made it safely . There was nothing on  crime watch!

I left M and went home, he hopefully found his car complete with wheels.

See you all next week! 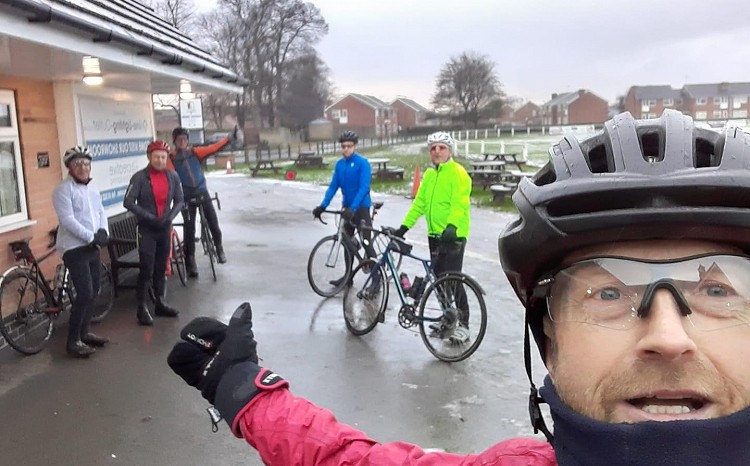