In the absence of our regular leader, it was a case of situation vacant and as no one is more vacant than me, I volunteered myself. The turn out wasn’t great, 7 in total, but we were well turned out, all but 1 of us in regulation TVC kit. The skies were overcast, but no rain was forecast (not today or for all next week or forever apparently).

Everyone seemed happy with the suggested route & cafe stop so at 0900 the magnificent 7 set off from TCC bound for Leger Lakes on an undulating route with regular regrouping planned if necessary.

The ride took us through familiar places like Oldcotes, Woodsetts, North & South Anston & Kiveton. Then over the border into not so familiar Wales & out again to Aston. The intention, then was to ignore the 1st sign for our next destination & head up the sharp hill off the A618 to Ulley. However, on seeing the early Ulley sign, everyone inadvertently turned right, thereby taking a short cut & substituting the bigger hill for a smaller one. No worries, as we still ended up in Ulley anyway. From there it was onto Brampton en le Morthen, Laughton en le Morthen & Leger Lakes not en le Morthen, some 25 miles into the ride.

As the sun had now got his hat on, we decided to dine outside, where the difference between llamas & alpacas was a topic of conversation. Apparently llamas do wear pyjamas & alpacas are always off on holidays (alpaca suitcase?). No one was keen to test out the nearby warning signs of “animals may bite” & “danger electrified fence” & so the topic of conversation turned to cycling in Mallorca & who was brave enough to be the 1st one to book for next year. The remainder of the route back was discussed & everyone agreed that a ride wasn’t a ride unless it was at least 40 miles.

We didn’t have to wait long for our breakfasts, in fact in some cases it took longer to eat them than wait for them to appear. 3 of us had gone for the breakfast bap option which turned out to be an extremely large Leger Lakes loaf with a filling of your choice. If you’d opted for fishes, I’m sure it would have fed 5000. My choice of a Leger Lakes scone would have won an award in a dry scone competition. I know there’s a water shortage but that scone...really!! Lawrence wanted to give away some of his big breakfast bap & I didn’t want to let him down, so I suppose that made up for the Sahara scone.

Suitably refreshed and/or overfed we set off on the fast downhill section into Firbeck where Lawrence discovered that he’d developed a wobbly seat (maybe due to the extra weight after his breakfast bap). After attempts to tighten Lawrence’s nuts it became apparent that his wobbly seat was here to stay & so wisely he chose to head straight for home before he ended up sitting on nothing but a seatpost.

The magnificent 7 became the significant 6 & off we cycled though Oldcotes, Styrrup, Harworth & Ranskill where smoke could still be seen from Fridays fire. Then it was a right turn to Blyth & over the A1 & up the hill back towards Harworth, where, by coincidence, smoke could be seen coming from Pete Downs tyres. Despite his tremendous PB in the TVC open TT on the Blaxton course only yesterday, Pete still found enough energy to leave us all in his wake as he disappeared into the distance. It's all good training for his forthcoming hill climb series, I guess. A few minutes later we arrived back at TCC after completing just over 40 miles, around 2000 feet & several thousand calories. As the sun was still shining it seemed rude not to have a refreshing cold drink, courtesy of Mick Cleghorn, before going our separate ways. 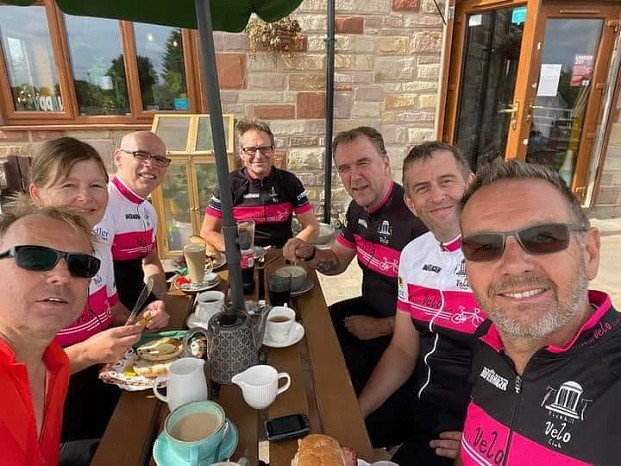