With many riders out of action for one reason and another, we were down to single figures for this morning’s ride.  I thought I heard someone talking about quality and not quantity but it would be wrong to make comment.

The original plan of going to Markham Grange was discussed and, as last week, a suggestion/request was made that we change this.  Two requests in two weeks... I’m going all soft.  Kieran pointed out that he had been through Sprotborough and there was much debris on the road.  We opted for Citrus, having not payed them a visit this year.

No mathematical challenges this week, we set off as one group of nine.  It was a familiar route to most of us and we made our way through Harworth, Ranskill and Mattersey.  For once I went off the front in order to answer a call (the nature type) and caught the group up as they started up Haughgate Hill.  The eager and enthusiastic members were off and away and the rest of us steadily made our way to the top.

We regrouped at the junction of the dual carriageway and made our way through North Wheatley, whereupon Ollie seemed to forget the TT was cancelled and set off a wee bit ahead.  I went to catch him so he didn’t miss the left to Bole and after a short burst on the A620 we arrived at the Retford and Gainsborough Garden Centre, securing the bikes in the bike cloche.

It wasn’t busy in the cafe so we were able to adjust the table setting and seating arrangements and were served with a selection of sandwiches and cakes.  Tailwind was on the agenda for discussion and the display packet which was on the table was hastily put away as two members of the local constabulary came in for a cuppa.  A quick pic and we were outside ready to go.  Well most of us were.  Kieran came outside having been a little unwell with a tummy upset and having contracted a pain in his side.  He convinced us he was OK to ride so we set off through Beckingham and Walkeringham.

We didn’t shout to Pete as we went through Westwoodside ‘cos we were on the main road and he wouldn’t have heard us.  Sanderson’s Bank was a little busy and breezy.  Better to ride single after a well maintained ‘riding in twos’ for most of the morning.  If the group thought the pace was steady for Kieran’s sake I’ll go with that... (I’m happy to discuss other options but not commit them to paper!)

We turned down Springs Lane (having said bye bye to Diana – and Kieran insisting he was feeling much better and wanted to continue on the ride rather than take the lift option with Diana) and no sooner had we set off than we stopped.  Flat.  Four of us were slightly in front so three of us (the gentlemen) took opportunity for one of those natural breaks only to find that it wasn’t a flat and the rest of the group ride past us.  So, they were on their way and here we were.... Mick set off first and I followed.  Mark and Denise behind.  Over the next few minutes we managed to catch them up whereupon Mick caught TT fever and set off in front of us.

We continued on to Austerfield and for me, one of the best bits of the ride occurred.  As we turned left onto Bawtry Road the lead riders shouted ‘clear’ and the rest of us followed... not a big thing really but we entered and exited the junction as a group of seven, keeping formation all the time.  From the back it looked grand.

We navigated Bawtry, saying bye to Mick, Mark and Denise.  I followed Ollie part way up Tickhill Road but realised that we were leaving the rest of the group.  Ollie kept his TT hat on for a bit but waited for us by the industrial estate only to find, before reaching the bend, his favourite spoke had made a bid for freedom once again.  That meant there were four of us left to ride into Tickhill.

Martin peeled off home so there were three of us back at the cricket club.  Clair set off in the car to pick Ollie up and then there were two.

This was a very enjoyable ride.  Why?  Good weather, good friends and good cafe stop.  Thanks folks... same again next week if you’re around. 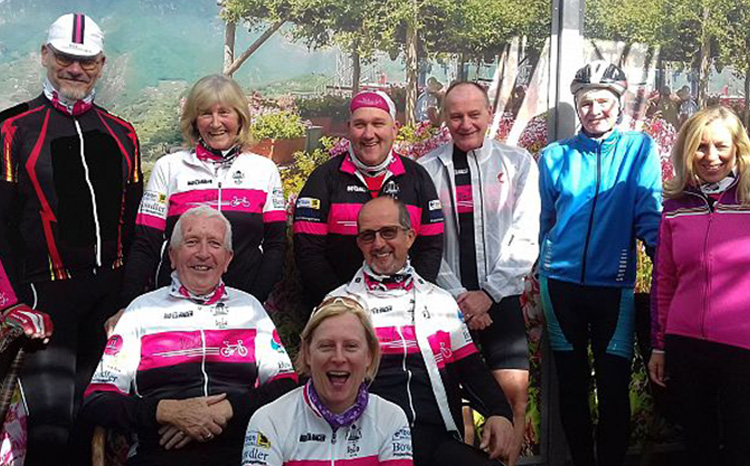