Riders: Karen Cleminson, Lawrence Buckley, Mick Lee, Martin Crapper, Peter Hanks and the ghost henceforth referred to as G - no G2 as he is definitely not Welsh!

The forecast was diabolical, so arriving (late) at the cricket club it was no surprise to see relatively few potential riders. But we were 6 and eventually ready to go. We set off east along Sunderland Street turning right towards Harworth. But we were down to 5, Mick was missing!

He wasn’t coming any time soon and he didn’t seem to be anywhere looking back towards Tickhill from the junction. We didn’t like to ask what happened when he turned up. Probably because this was a good (essential) chance to get the weatherproof jerseys on! Well, you can only ignore rain for so long.

The route took us right in Harworth, through to Styrrup and on to Oldcotes. The rain eased a little and we were able to see the new entrance canopy at the Manor Café. But we were not tempted to

go in. Onwards to the junction, right and then left passed the church where we put the rain jackets back on and then turned left again towards Langold.

The breeze was in our faces and with it the rain but happily only just rain — sort of heavy drizzle not full grown rain. I hardly saw Langold, it wasn’t a day to loiter and enjoy the view, although we probably did! As we reached Carlton we turned right along Lown Road and through the industrial estate and then right again on Rotherham Baulk and into Gildingwells along Woodsetts Road.

I can confess now because we got there in the end — the map on my Garmin had this little note about going back to the route. I find that so annoying. If I had a human navigator I could ask for a nice sheltered route and then argue when it’s not possible. But no amount screaming works, probably only understands Chinese!

We turned right in Woodsetts and then took the right fork into Dinnington. Garmin failed again so we took a slight detour and relied heavily on Karen (at the back) to communicate the turns to Lawrence and G3 (at the front). After a while we had a little rest, knew we were on the planned route again and within half a mile we were there. Wet, probably a bit shrunk, but there!

The café staff welcomed us to drip all over the floor and we found a table for 6 easily. Rain jackets off. Waitress waiting to take our order. Drinks first then food, all ordered — oh sorry no sausages, the manager hasn’t arrived. Were they going to cut him up? No problem with my scone and butter.

We were busy chatting when the waitress came back, no bacon i’m afraid — the manager ………

So Toast and scrambled egg for 5 please. Before long drinks and food were served. My scone and butter had become scone, cream and jam but was at least a 9 out of 10 job.

G2 took the photo, we think he didn’t want to break the camera!

The conversation quickly centred on how wet do we want to get. Unanimously we agreed on shortest route home, unless there is water taxi! So we went back into Dinnington, Throapham, waved at Leger Lakes Café and wizzed down into Firbeck.

At the other side of Firbeck, two of us stopped to tell the guy parked with his caravan where he was and where to go — er no, where to proceed to!

Up Thornbury Hill Lane and down the other side where we caught up with the group who probably expected a tale of woe. It was too wet so we continued on.

We 6 arrived wet but safe at the cricket club just as my Garmin battery went flat. The good news is that my ride was recorded — at 25 feet and 10 feet of climbing. Somehow it felt harder than that. Oh well serves me right for using the map view.

Thanks everybody the weather made the ride! Hopefully see you next week.

Im looking forward with no great expectations to a warm dry ride next week. 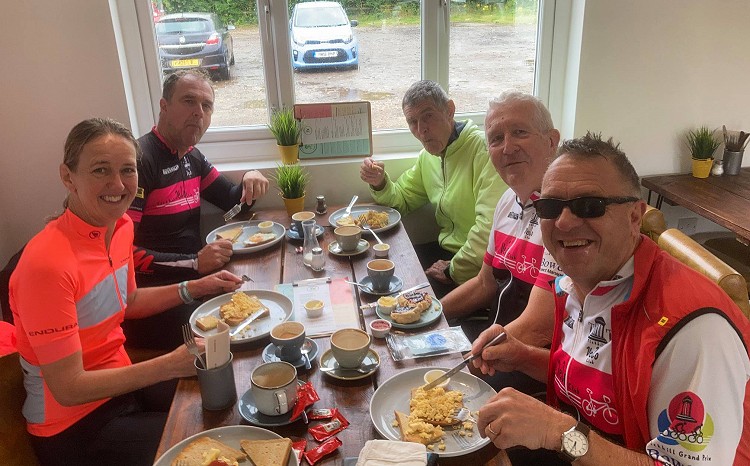