The forecast was for early mist which would clear to give temperatures of 6 or 7. Which is probably why you all stayed in bed. But you missed a great ride! We cycled through fantastic scenery had great company and a fantastic café stop.

Now for the truth:

We huddled together in the changing room of the cricket club to keep warm and pondered over how many would turn up. Apologies were received from Mick Lee and Diana Simpson . No sick notes — not even from the Doc!

9 o’clock and we were off heading towards the murky mist and Harworth. the garden centre seemed closed so we didn’t stop for coffee. We were able to ride 2 abreast as there was little traffic and made it safely to the first of the 2 roundabouts where we turned left. Up the hill passed the chip shop (closed) and back onto the Bawtry Road. Little and traffic here and we made it passed the junction and onto Station Road. The fine cleansing mist was fogging up the sunglasses so there was a lot of wiping going on!

We chatted our way along — it was a bit like echo finding, no talking=no contact, and with visibility down to oh about this much I could only just make out the back marker pin my little mirror whoever he was. By the time we reached the roundabout with the option to go left passed the southern end of the runway I had had enough of wiping!

We stopped to do a proper job on the lenses and as a bonus democracy was exercised. But unanimously we opted for the longer route around the northern end of the airport and headed off into more mist. Suckers for punishment!

A quarter miles on and I headed into the lay-by; glasses off and tucked away, you can only do so much wiping.

The magnificent scenery I mentioned earlier was a fine mixture of BS2660-7081 Steel blue and RAL 7035 Light Grey as I’m sure you are all familiar with! And we peddled through it with hardly a care in the world — frozen fingers and toes excluded. Santa was happy anyway.

Into and through Finningley we went and up to Blaxton where we had a little rest before turning left, going passed Walkers Nursery (full of cars) (yes we could see that far) and then left into the maze of the airport. Jon was feeling a bit restrained, he’d been politely behind a Blue rider all the way, so to liven things up a bit he tried to wipe out another rider by turning right — no indicators, no looking over the shoulder oh, and no checking to see that it wasn’t “only-one-useful-shoulder-Rob” about to hit the deck. I guess having been down and broken before gave Rob the edge as he elegantly weaved his way round Jon. The scene only slightly marred by a proliferation of Scottish adjectives.

All was well with the pair, the rest of us suffered from shock of course but we soldiered on. Not sure how but we made it through to the main Bawtry Road to be greeted by a green light so kept on right and then left. Cars could be seen in the Go-Outdoors car park so visibility was a bit better.

As we began the long road back to Tickhill Dave finally gave in to temptation and stretched his legs almost disappearing into the mist and before we reached the Main Bawtry-Tickhill Road Jon also went ahead. We caught them at the junction of course. Or rather they waited for us there, and having rounded the corner they went off again.

There were lots of cars in the car park at the garden centre, but we made it through and walked our bikes through to Wellingtons where we found a nice warm corner , shuffled chairs around and then wen toff to order. The Drinks and food were very welcome and we enjoyed the contrast with the outdoors. The conversation was unreportable in places. Is that a word? Smutty is another!

Lots of chatter and for some a second coffee before the majority felt it better to go home rather than risk lap two. That only left two of us to do Lap two. BUT after photos outside and as I left to start lap two - you guessed it I was on my own. I would like to say that it was the best part of the ride, with the sun out and no wind. But I went home as well! 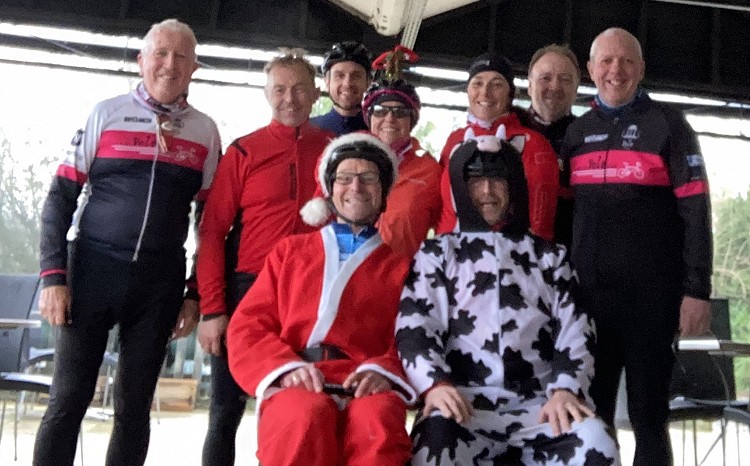