With a combined age in the region of 160 years it was back to skool for 3 mature (or in my case immature) students of Tickhill Velo College. Like the studious pupils that we are, Jon Brough, Kez Wilcockson & me had volunteered for extra tuition from Miss (Catherine) Adams who was hoping to gain even more qualifications than she has already, by becoming a level 2 go ride instructor. And so it was that at 1600 on 15th October we assembled for registration in the playground of St Mary’s skool, Tickhill, where the lesson of the day was how to ride slowly. I know, that sounds totally contrary to why most of us ride a bike, but there was good reason for it and not just to see if Jon was capable of riding under 20mph.

After a demonstration by Miss Adams, the 3 of us set off in an attempt to master the art. A series of tests, trials & games were played during which time it was clear that Jon must have been practising before the lesson even started. How else could he be so good? The 40 minute lesson flew by, by which time we had all passed with flying colours (just about).

So good had we become at riding slow, we were even considering joining next Sunday’s blue ride (only joking blue riders).

Star pupil, Jon, took centre stage on the mock podium with Kez & me wondering how to knock him off his lofty perch next week.

Miss Adams was delighted & the pupils were dilated with the afternoons work, particularly as no one got detention, lines or extra homework.

So after this week’s fun & games it’s same time, same place next Thursday for more extra tuition. If you fancy a go, please contact Miss Adams as all are welcome & you can be added to the register provided you have parental consent.

As an aside, Jon, Kez & me were approached by St Mary’s Skool drama teacher to play the roles of the ugly sisters in the Christmas skool panto. Unfortunately, as charming as she is, Miss Adams was overlooked for the role of Prince Charming. 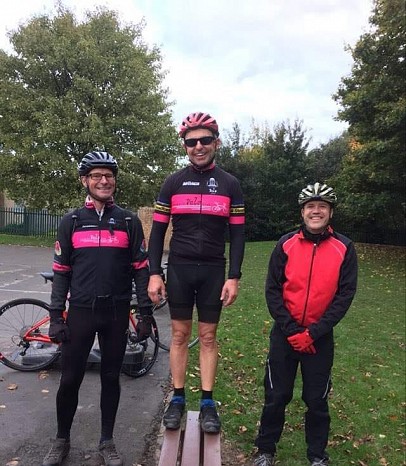