Blue ride to Idle Valley (or not as the case was)

Three of us ignored the weather forecast together with almost double figures worth of red riders and met up at the Cricket Club. It was not raining and the wind was light - couldn’t be better for the time of year. There were three of us Me, Martin Crapper, Rob Drohan and Mick Lee

We let the red group go, had a quick chat and realised that we each had a good reason to go somewhere else in order to get back early. The old favourite Retford was selected from a list of - one, and we set off heading East. We had a plan now and went through Harworth and Serlby before turning along strangely named Folly Nook Lane towards Mattersey. I can’t say I noticed the scenery as we spent most of the time talking. Talking despite the large numbers of vehicles on the road.

With three of you, unless you are three abreast, one can get “distracted”. Rob was a case in mind!

Head down way in front and about to go the wrong way when we realised and shouted at him to turn on Job Lane. He did turn, we followed and the big tractor which had been slowly catching us was able to go unhindered somewhere else. From there it was an easy ride through Sutton to the main road where we could see barriers and road closed signs blocking off the way to the railway crossing where we always have to wait!

It was an easy decision to make so we turned left and headed straight into Retford noticing the increase in traffic as we got nearer. We made it over the roundabout as a group and headed towards what looked “interesting”, or “blocked”. They can’t do it twice to us and we kept on past the roundabout with the big blue blow up slide on the left, the coconut shy on the side of the shops and dozens of stalls on the square. Christmas Market day!

The Ten Green Bottles was almost empty when we got there so seats inside were easy to find. We ordered our drinks and snacks - which came quickly - and Rob took his and Mick’s sausage rolls back to get nuked. If you order hot you expect warm at least! They came back and were soon dispatched. Not the greatest but still very welcome.

Setting off again Rob went ahead cycling slowly along together with a random MTB rider but Mick and I had a very pleasant conversation with a security guard who politely pointed out the enormous risk to his charges (the public at large) and we complied with his advice to Walk!

Catching up with Rob at the far end of the road closure area we had a quick review of the route we were going along the green mile to Barnby Moor and they were going home from there via Oldcotes and I was going home via Harworth. We mad it through together without too much sweat and parted company. I assume they made it home.

I got to the Tickhill side of Harworth and met Diana Simpson cycling the other way. She is recovering slowly from Covid but seems cheerful enough. A few minutes later I was back home and ready for the late shift! 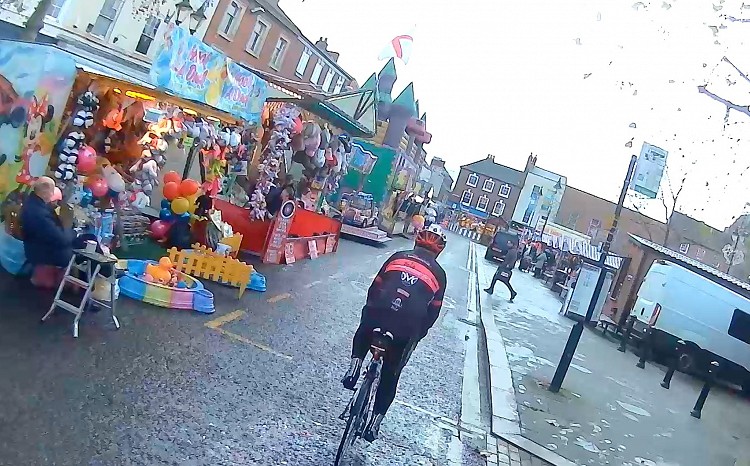