OK, so let's get the obvious out of the way

1. I'm only a trainee Ride Leader and haven't yet done the "how to write up a ride" part of the course

3. Route design courtesy of Google Maps / Strava (i.e. their fault if / when the ride went wrong)

Having ridden in to the club against a reasonable headwind, I had low expectations of the number of people attending for the ride. I therefore wasn't surprised to find no-one at the club (however, it was only 8:40). The first rider to arrive was Martin Bagshaw (there must be something in this about Ride Leaders arriving early - strange that Martin Crapper had never mentioned that this was a requirement???)

By 8:55 (nearly) all of the riders had arrived - the Red Riders outnumbered the valiant Blue Riders by 2:1 - this just proved that the Blue riders were double the quality of the Red Riders

At 9am we set off with the planned route being

Apparently, Google / Strava's belief that the ride was "through Clumber" was based on the fact that we skirted Clumber but with a tree canopy

We arrived at the Old School Tearooms without Christina having to stop and visit Hughie (something to do with the volume of alcohol imbibed on Friday night!!! and the vestiges of a hangover) - amazing that she managed to eat the Salted Caramel Cake, well 50% of it, leaving the rest of it to another rider to finish off

Well, this is where my Wahoo decided that the ride should become a mystery tour as it would direct us down a road and then decide to stop plotting for 2+ miles and then put the route back up and then repeat the sequence

The return route is somewhat more hazy in my memory - other than we did manage to visit all of the intended villages. As we got back towards Harworth, riders said their "Byes" and all disappeared in different directions for their ride home, leaving Christine and me to finish off the ride back to Tickhill before heading off ourselves 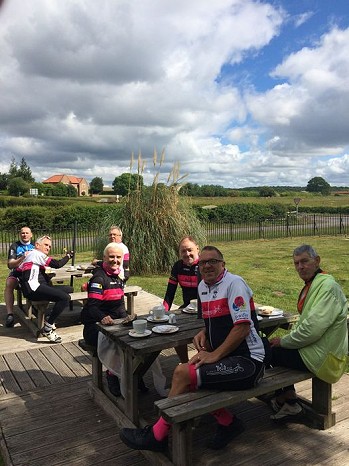