We met in the cricket club car park with warnings of unpleasant weather, but that was no reason to stay in bed and 4 Blue and 3 Red riders agreed. Setting off into a morning of occasional showers! Not really, i don’t remember it raining at that point, but we were cheerful enough. Ok almost the truth, 3 Blue riders and Helen, a maybe Blue rider if she likes us enough.

Along to the east and south to the Harworth roundabouts with no rain but thanks to a couple of trees just before the Serlby junction we were able to don rain jackets in relative dry conditions, watched by Helen who already had hers on!

Thro’ to Scooby Top and our first view of road closed signs, but it didn’t mean us and the triathlon cyclists were going the other way. Trickling through to begin with, heads down, summer shirts , Sri Bars and no chance of acknowledging us. Then the numbers increased and the odd wave was seen. By the time we got through to Mattersey ‘they’ were talking - probably enabled by riding slower and breathing and they were not going to win so why not? We lost them again as we turned right towards Clayworth and lost Paul as we headed for the top of Strawberry Hill. As we waited we met up with friends of Mick, who claimed to have taught him all he knows, but looked half his age (sorry Mick).

At the top of Haughgate Hill (when did it ever get known by TVC as Strawberry Hill?) we turned left onto the dual carriageway and helped with the flood relief effort by soaking up the rain and made it to the safety of the poly-tunnel bike park in the garden centre. Stopped raining then!

We ordered and drank and ate in the comfort of the café with views of sunshine on the Amalfi coast and dripped quietly under the table. I think we all enjoyed the stop although it did get a bit political for a while.

A quick discussion resulted in a more direct route home to allow Mick to get back home and for Stuart to get back before he got much wetter. None of this spoiled the ride (well not for me anyway) and we set off onto the dual carriageway towards Gringley. Those nice Triathalon people had coned off the inside lane for us and provided small groups of people to cheer as we went past all very Tour-De ish. I don’t remember seeing any official riders so it must have been for us!

We had a couple of stops on the way to let Paul catch up and a longer one as we turned off the dual carriageway to head towards Clayworth. With hindsight we got this wrong, as pointed out be a lady in a car who pointed out the location was not that safe (for her). The next mile or so was all downhill and gave some speed to the group. Turning right (twice) saw us going north out of Clayworth towards Drakeholes and returning along our outward route.

At Harworth, Mick turned off (well he went straight and we all turned off I suppose) and went to Styrrup and onwards to home. The rest of us turned and went through Harworth and back to Tickhill, still raining but not too bad. Stuart went off home and Helen and I went into the Cricket club car park. Paul eventually arrived and he and I chatted about bikes. He doesn’t do Facebook but needs advice on a lightweight road bike so If you get the chance slip in your two pennyworth and hopefully he will be able to keep up.

No incidents, no accidents, no technicals - nice ride Thanks everybody. 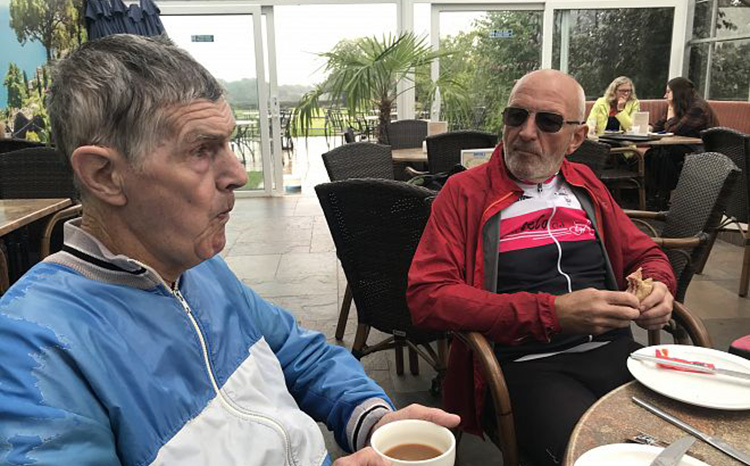